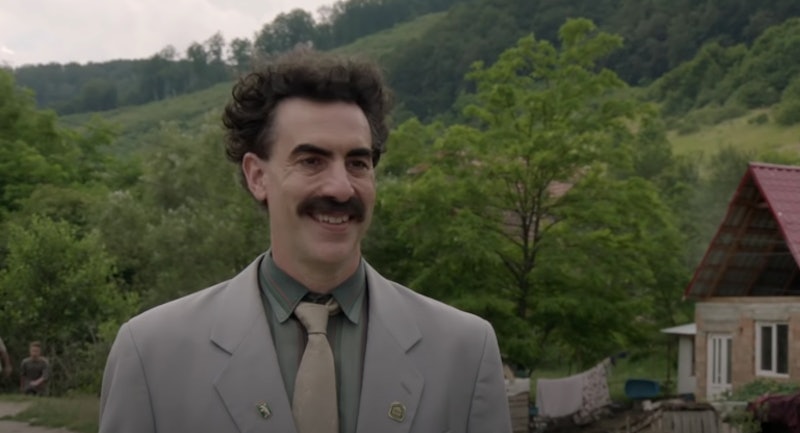 COVID-19, Donald Trump, and Mike Pence are just a few of the elements featured in the chaotic trailer for Borat 2, the sequel to Sacha Baron Cohen’s offbeat 2006 mockumentary. Titled Borat Subsequent Movie Film: Delivery of Prodigious Bribe to American Regime for Make Benefit Once Glorious Nation of Kazakhstan, the follow-up film finds Kazakhstan reporter Borat (Cohen) returning to America once again — this time with his daughter in tow. He plans to “gift her to someone close to the throne,” code for someone in the White House, to curry favor for Kazakhstan.

And, before you ask, yes, that does appear to be Vice President Pence himself in the trailer. The clip includes footage of Cohen crashing the Conservative Political Action Conference while dressed as Trump back in February. “Michael Penis, I brought the girl for you,” Cohen says in his trademark Borat accent, much to the vice president’s chagrin. (Cohen, while not identified at the time, was eventually escorted out of the premises.) The comedian apparently shot the sequel in secret over the summer, according to IndieWire, so the timeline adds up.

Reflective of our current times, Borat: Subsequent Moviefilm — originally rumored to have been titled Borat: Gift of Pornographic Monkey to Vice Premiere Mikhael Pence to Make Benefit Recently Diminished Nation of Kazakhstan, by the way — is also expected to tackle far-right groups, former Mayor of New York Rudy Giuliani, and the late convicted sex offender Jeffrey Epstein. According to Deadline, Borat 2 was the first film made during the COVID-19 shutdown — filmed as production restrictions had started to ease — as Cohen reportedly wanted to have the mockumentary film completed prior to Election Day on Nov. 3.

While filming had largely been kept under wraps, fans started to suspect that the comedian was working on something after the news broke in June that Cohen had crashed a far-right militia rally in Washington. Dressed in overalls and a fake beard, the comedian was recorded fooling the crowd into engaging in a singalong with racist lyrics that referenced “Wuhan flu.”