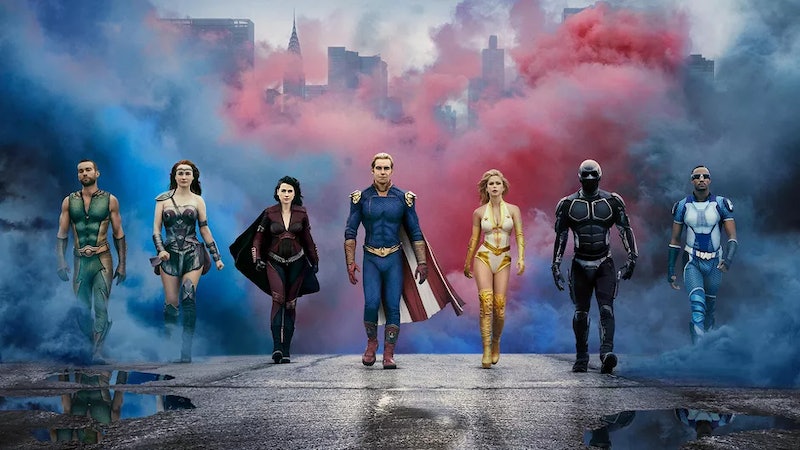 The Boys really came into its own in its second season, gaining a wider fan base and breaking Amazon’s record for the biggest global launch. Following a rising fascist tide among the ranks of The Seven, the season paralleled the increasingly authoritarian politics of Trumpism as we headed into a critical election. But in the months after its explosive Season 2 finale, all attention has turned to The Boys Season 3.

Based on the finale, it seems like Congresswoman Victoria Neuman — the show's not-so-subtle stand-in for Rep. Alexandria Ocasio-Cortez — will be Season 3’s main villain after she was revealed to be the mysterious head-exploder who kept saving Vought from its comeuppance. It also appears likely that Homelander will try and seek out his son again, and there’s a sense that The Seven's current uneasy alliance isn't long for this world. Here’s what else we know about Season 3 so far.

While a premiere date for Season 3 has not yet been announced, fans can rest assured that production has wrapped. Several cast members — including Karl Urban, Erin Moriarty, and Jack Quaid — celebrated the end of filming on social media. “You all deserve a hug, and a drink… and a lot of therapy after what we just did,” Quaid wrote on Instagram in early September.

Given the complications caused by the pandemic, shooting for Season 3 took longer than the previous two seasons. Filming for Season 1 lasted four months while Season 2 lasted five, with both requiring roughly 10 months of post-production before making their premieres. Season 3 filmed from early February to mid-September, so factoring in the heavy special effects often employed by The Boys, it’s a safe bet that Season 3 won’t hit Amazon until sometime in 2022.

The Season 2 finale wasn't nearly the bloodbath some fans were expecting, so it's safe to say that most of the show's main cast will remain intact. Karl Urban as Butcher, Erin Moriarty as Starlight, Jack Quaid as Hughie, Anthony Starr as Homelander, and the rest of The Boys and The Seven will all be returning — with the possible exception of Aya Cash as Stormfront. The 100-year-old Nazi lost her legs, one eye, one arm, and was burned beyond recognition, and though her character is still alive, it seems unlikely that she'll be much of a factor in Season 3, if at all. Also unlikely to return are the actors whose characters did die in the finale: Shantel VanSanten's Becca Butcher and Goran Višnjić's Alistair Adana.

There will be several new characters in Season 3 as well. Supernatural star Jensen Ackles has been confirmed to play Soldier Boy, the "first superhero" in The Boys universe and a parody of Captain America. Laurie Holden (The Walking Dead) will play Crimson Countess, the show’s version of Scarlet Witch, who, similar to her MCU contemporary, is in love with an android-esque character named the Mind-Droid. Miles Gaston Villanueva (Nancy Drew) is set to play Supersonic, Starlight’s ex-partner and a member of the superhero troupe Payback who you can expect to be an obstacle in Starlight and Hughie’s burgeoning relationship. Nick Wechsler (This Is Us) and Sean Patrick Flanery (Dexter) will also join the Season 3 cast as Payback members Blue Hawk and Gunpowder, respectively. Finally, Katia Winter (Sleepy Hollow) will take on the role of Little Nina, a nefarious Russian mafia boss who works with Vought.

Rumored to be joining the cast is The Walking Dead's Jeffrey Dean Morgan, with whom series creator Eric Kripke has spoken about two undisclosed roles. Morgan’s appearance is not a done deal, but Kripke told Collider in July 2020 that they were trying to figure out a way to make it work with their respective schedules. There's also a wild card: Shaquille O'Neal. The NBA legend is a massive fan of The Boys, and during the show's recent New York Comic-Con virtual panel, he told Kripke that he wants to become a member of The Seven. Shaq was just joking — probably — but his addition to the cast wouldn't be the weirdest thing to ever happen on the show.

No one really knows what’s in store, but there are a few guesses to be made. As mentioned, it seems pretty obvious that Congresswoman Neuman (Claudia Doumit) will be the season's Big Bad. The third season will also delve into the origins of Payback, the world’s original superhero team who operated during World War II — basically, they were the Seven before the Seven existed. And you can certainly expect more of the biting social commentary that made Season 2 so compelling. “I think the overall theme of the show is you need to have a healthy suspicion of your authority figures, and that goes for all of them,” Kripke told Entertainment Weekly of Season 3.

Other than that, fans can probably expect to see some other threads followed that were laid out in the Season 2 finale. Will The Boys get back together now that they've all seemingly gone their separate ways? Will The Seven get any new members, and will their current members be able to restrain themselves from killing each other? Will The Deep ever drink another Fresca?

More like this
Everything To Know About The 'Daisy Jones & The Six' TV Series
By Maxine Harrison and Brad Witter
Netflix Shut Down 'Bridgerton' S3 Rumours About A “Very Dark” Storyline
By Bustle
'The Queen’s Gambit' Season 2 Tweet Wasn’t From Anya Taylor-Joy
By Mary Kate McGrath, Jack Irvin and Grace Wehniainen
Everything To Know About 'RHONY' Season 14
By Jake Viswanath, Alyssa Lapid and Brad Witter
Get Even More From Bustle — Sign Up For The Newsletter
From hair trends to relationship advice, our daily newsletter has everything you need to sound like a person who’s on TikTok, even if you aren’t.