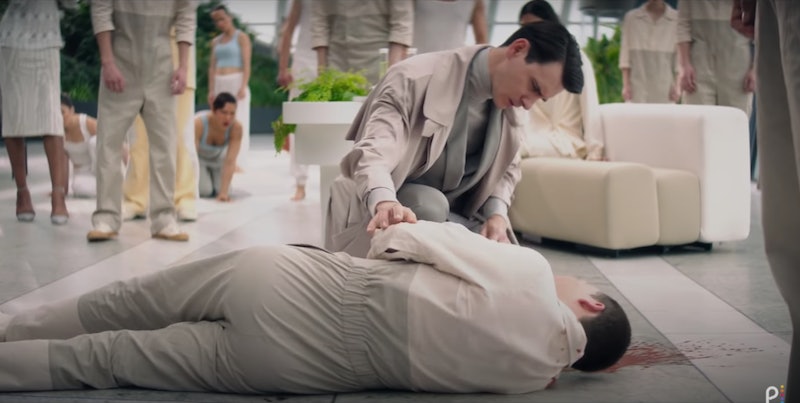 You may remember Aldous Huxley's Brave New World from your school days. The book takes place in the World State, a futuristic society where citizens' lives are engineered before birth and carefully regulated until death. Peacock is turning the novel into a new miniseries starring Jessica Findlay Brown (Downton Abbey) and Alden Ehrenreich (Solo, Hail Caesar!). And for those looking to brush up on the book before diving into the adaptation, here's a refresher on the Brave New World book ending.

Brave New World is a highly stratified society, in which everyone is divided into castes ranging from high-ranking Alpha Plusses all the way down to Gammas, Deltas and Epsilons. In this society monogamy doesn't exist, and neither does marriage or family life. Lives are meant to be lived happily and without hardships — and should any citizen find themselves with negative feelings, there's always soma, a wonder hallucinogen/antidepressant to help you forget your troubles.

But everything stars to change when John — a young man born to a World State citizen but raised on a reservation in New Mexico (called Malpais) where archaic practices like marriage still exists — is discovered. John's mother Linda is a Beta-Minus, a slightly lower caste, who became stranded in Malpais while on vacation. At the beginning of the book, John is discovered by Bernard, a high-ranking Alpha Plus with an agenda. Bernard brings both John and Linda back to London, where John becomes an instant celebrity — but he's not having any part of it.

John absorbed the Malpais people's religious practices and concepts of romantic love. Confronted with the hedonistic, pain-free World State, John judges their lifestyle while remaining blind to his own shortcomings.

In London, Bernard's only friend, a writer named Helmholtz, immediately bonds with John. Bernard tries using John's celebrity to move up in society, but eventually the three men find themselves in trouble and are brought before Mustapha Mond (the the Resident World Controller for Western Europe). Emotional outbursts of any kind are anti-society (which the three men all commit), and John's refusal to take soma is considered treason. Mond banishes Helmholtz and Bernard to the Falkland islands as punishment. John begs to join them, but Mond insists John remain to see what ultimately becomes of him in London.

More like this
Andy Cohen Apologized To Larsa Pippen After A 'RHOM' Season 5 Reunion Dust-Up
By Brad Witter
Hallmark’s The Way Home Is Like 'This Is Us' Meets 'Back To The Future'
By Grace Wehniainen
The 'New Amsterdam' Series Finale Opens An “Unexpected” Door To The Future
By Brad Witter
The Song At The End Of 'The Last Of Us' Ep 1 Has A Deeper Meaning
By Sophie McEvoy
Get Even More From Bustle — Sign Up For The Newsletter
From hair trends to relationship advice, our daily newsletter has everything you need to sound like a person who’s on TikTok, even if you aren’t.