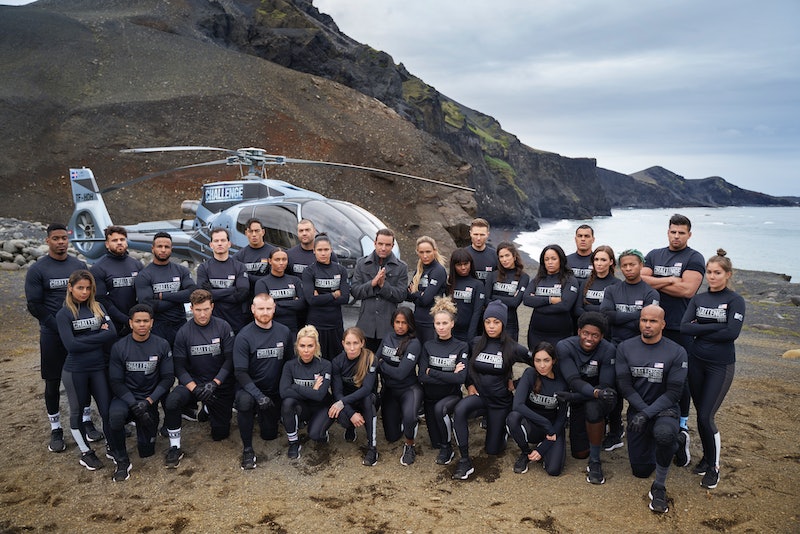 For The Challenge, the show must always go on. The series has produced 36 seasons since 1998, and not even a pandemic was going to slow it down. The cast of The Challenge: Double Agents traveled to Iceland to shoot the season in September, according to Variety. (Iceland has a low coronavirus case count, so that made it easier to film there than in many other countries at the time.) To keep production as safe as possible, the contestants and crew quarantined until they tested negative and were able to move freely within the country. Even still, they were tested every three days until filming concluded. Now, MTV is ready to air everything that went down.

The Challenge is known for switching up the show's format to keep viewers entertained, and this season is no different. This time, contestants will be partnered up for the challenges, which explains the "double" in the title. The competition is split between veteran players and rookies who are still familiar to fans since they appeared on other shows. Viewers will see the usual rotation of Big Brother, Are You The One?, and Real World alums, as well as competitors from Love Island, America's Got Talent, Survivor, The Amazing Race, the Olympics, and more.

Get to know the 30 challengers in the Double: Agents cast below as the season kicks off.

Having competed on Big Brother, she's used to challenges, but maybe not the ones that The Challenge will have.

Original TV Show: Are You The One? Come One Come All

Amber may be petite, but watch out for her. She won't let anything stand in her way, according to her Challenge bio.

Aneesa is no stranger to this game, and she's hungry for her first victory.

Having already won The Challenge twice, Ashley has a leg up on most of the contestants.

A Challenge legend, CT is definitely the one to watch.

As the father of two daughters, Cory wants to win to provide for his girls.

Darrell's boxing and fitness career has prepared him to take home his sixth win.

Original TV Show: Are You The One? Season 3

After engaging in "embarrassing" behavior during past seasons, Devin wanted to approach this game in a way that will make his family proud.

After losing Big Brother and his first season of The Challenge, Fessy is back to nab the victory.

In the past, Gabby's TV strategy has mostly been to make friends, but she'll need to tap into her competitive side to rock out the challenges.

Jay had a rough rookie season, as he was constantly voted into elimination challenges. But all that only made him stronger for this go-round.

Joseph has his work cut out for him with a background in music and no experience with physically competitive TV shows.

Josh won his season of Big Brother, and now he's looking to bring home a victory on The Challenge.

Original TV Show: Are You the One? Season 5

Kam got to compete with her boyfriend Leroy, which could give her a pretty big advantage.

Like Josh, Kaycee is looking to add a Challenge win to her resume alongside her Big Brother victory.

After losing five seasons, six could be the charm for Kyle.

He's gone 11 seasons without a victory, so he's hungry for this one.

He may be a rookie, but his wrestling career will make him tough to beat.

She's a rookie in the world of The Challenge, but she's used to tough tasks thanks to her Celebrity Big Brother stint... oh, and being a freaking Olympian.

Mechie was a bit of a pot-stirrer on Ex on the Beach, but he says he's ready for the competition and to go for the win.

He made it to the finals Ultimate Beastmaster, but can he beast through The Challenge?

Nany's another Challenge alum with no wins under her belt. She's looking to break that streak this year and go all the way.

Natalie's new to The Challenge, but her time on The Amazing Race and Survivor has prepared her for this grueling competition.

Original TV Show: Are You The One? Season 3

Nelson once volunteered for elimination so his friend could advance in the competition, but don't expect him to make that same move twice.

As a professional firefighter, Nicole is prepared for anything The Challenge will throw at her.

Liv is known for always saying what she means, even when it gets her into trouble. Don't be surprised if she causes some drama this season.

It's been five years since Theresa competed on The Challenge, but she's ready for a comeback.

Original TV Show: Are You the One? Season 4

Tori has a reputation for being friendly, but that hasn't won her anything yet. Maybe she'll adjust her strategy this time.

Big T has been an easy target in previous Challenge seasons, so she may be looking to come out of the gate as a big threat this time around.

Wes is a Challenge pro, and he's looking for another shot at MTV glory.

More like this
Molly-Mae Hague & Tommy Fury Celebrate Pregnancy Reveal In The Sweetest Way
By Sophie McEvoy and Sam Ramsden
What Exactly Is The Bish & Chips Show?
By Frances Stewart
Wait, Is Maya Jama Confirmed To Host 'Love Island'?
By Sophie McEvoy
Is Salley Actually Going To Be On 'Bachelor In Paradise'?
By Kadin Burnett
Get Even More From Bustle — Sign Up For The Newsletter