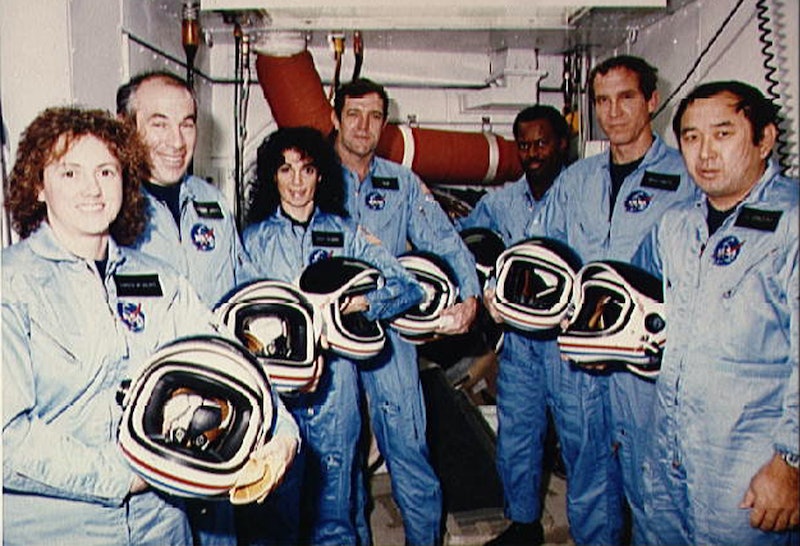 Between Away, Space Force, and Avenue 5, there have been a lot of space shows on TV this year. Now there's another to add to your watchlist, albeit much more serious in tone: Netflix's new docuseries The Challenger, which revisits NASA's storied space shuttle explosion in 1986. As Americans watched the devastation play out on live television, all seven of the Challenger's crew members died, marking a dark chapter in U.S. history.

Afterward, NASA suspended their shuttle flight program for two years to investigate what went wrong and to stop it from every happening again. However, it wasn't NASA's first fatal mission (the Apollo 1 caught fire in 1967, killing all three astronauts on board). Nor was it the last: in 2003, the Columbia shuttle exploded as it was returning from space.

Still, the Challenger is one of the most memorable examples of a failed space mission. The mission would have marked several firsts: the first teacher, the first Asian-American, the second American woman, and one of the first African Americans in space, as well as two longtime astronauts on their first mission ever. Their hopes were dashed that fateful day, but their lives and legacies are not forgotten. Here's who was aboard the Challenger when it exploded.

In 1984, NASA unveiled the Teacher in Space project, designed to honor teachers and inspire students to get interested in STEM, per the NASA website. McAuliffe was chosen from thousands to be the first teacher in space. She was a graduate of Framingham State College and Bowie State College and taught classes in history, economics, law, and women's history. Four years after her death, NASA canceled the Teacher in Space project.

Jarvis wasn't supposed to be on the Challenger at all. According to the New York Times, he'd been scheduled for two previous space flights but got bumped from both until he landed on the fateful Challenger. It was his first shuttle flight after years spent in the industry: he joined the Air Force in California's Space Division in 1969. As the Challenger's onboard payload specialist — aka astronauts who conduct research and experiments in space — he was supposed to study how liquids move while in an orbiting spaceship.

Mike Smith wasn't supposed to be on the Challenge either, but he got bumped from another flight, per AmericaSpace. He was the shuttle's pilot, with years of experience as a naval flight officer under his belt. It was his dream to go to space, and the Challenger was his first official mission. He'd previously been quoted saying, "Whenever I was conscious of what I wanted to do. I wanted to fly. I can never remember anything else I wanted to do but flying." He died doing what he loved.

Judith Resnik broke gender barriers throughout her life. A top student in many of her high school classes, she joined the chemistry and French clubs, the National Honor Society, and was the math club's only female member, according to the Akron Beacon Journal. When she made NASA's astronaut crew in 1978, she was one of six women on the 35-member team. But her father told the Beacon Journal that Resnik resented being labeled this way. "[She said], 'Dad, I don't want to be a Jewish astronaut, I don't want to be a Jewish woman astronaut, I just want to be an astronaut, period. I just want to go out in space and do my job." In 1984, she did make it into space aboard the Orbiter Discovery, becoming the second American woman to do so behind Sally Ride in 1983.

As Mission Commander, Scobee was in charge of the Challenger. His NASA bio says he became an astronaut in 1978 after joining the Air Force in 1957. Prior to the Challenger explosion, he'd logged 168 hours in space. When he died, he left behind his wife June and children Kathie and Richard. Despite what happened to her dad, Kathie told People magazine earlier this year that she still supports the exploration of space, even if her own children wanted to become astronauts. "Absolutely. I will support my kids in anything they want to do, and I would be proud for them to go into space exploration. Very proud," she said.

Ronald McNair, a physicist, was one of the first African-American astronauts to go to space. He logged 191 hours in space and completed his first mission in 1984, per the New York Times. This experience allowed him to be Mission Specialist for his second flight on the Challenger. In addition to his work for NASA, McNair was a jazz saxophonist and had a fifth-degree black belt in Karate, per UC Berkeley. Upon his death, Congress agreed to help fund a program in his name to help low-income and first-generation college students continue their education. Berkeley has one of those McNair programs in place.

In 1985, a year before his death, Onizuka became the first Asian-American to travel to space. Per his NASA bio, he was part of the Discovery flight, logging 74 hours in space. Prior to becoming an astronaut, he worked in the Air Force where he flew over 1,700 hours. The Challenger was set to be his second flight into space.