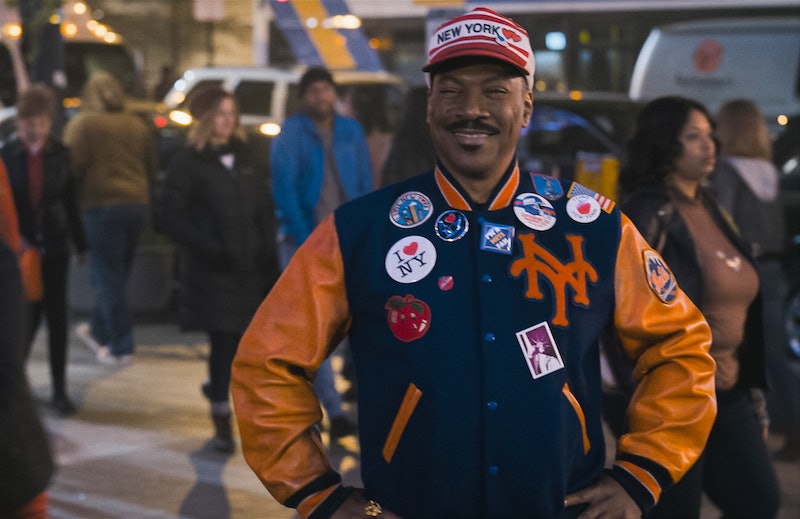 In 1988's gut-busting comedy Coming to America, Eddie Murphy stars as Akeem, prince of the African nation of Zamunda who leaves a life of prosperity and wealth to find the love of his life in America. His journey brings him to Queens, New York, and while posing as a poor fast-food worker at the local McDowell's (yes, a McDonald's knockoff), he meets Lisa (Shari Headley), the daughter of the well-off McDowell's owner. Akeem wants Lisa to love him for who he is and hides his true identity, but naturally the two fall for one another over the course of the hilarious story.

Now, over 30 years later, pretty much the entire cast is back for the sequel Coming 2 America, premiering on Amazon Prime on March 5. In this new movie, Akeem and Lisa have three intelligent daughters, but the laws of Zamunda declare that only a male may inherit the throne. That's when Akeem learns that he has a son in New York and has to travel back to America to bring his heir home. But Akeem's oldest daughter, Meeka, was hoping to inherit the throne despite the law.

Murphy called the original Coming to America a "modern fairytale that a lot of people love" in the film's press notes. "This film is a really cool continuation of that story, and I want people to have a great experience while watching it."

After Murphy got his start as a standup comedian, his acting career has spanned almost four decades now, with starring roles in comedy classics like Trading Places and Beverly Hills Cop plus voice work in some beloved movies including the original animated Mulan and the Shrek series.

Coming to America co-star Arsenio Hall is returning as well as Prince Akeem's trusted confidante and companion Semmi. Like Murphy is reprising all of his heavily made-up roles, Hall is also playing barber Morris, Rev. Brown, and a character named Baba.

"The thing I love about playing Semmi is that he’s so totally different from me," Hall said in the press notes. "We have different egos and dispositions toward life. Semmi is that guy who’s always around and even though he’s a pain in the ass, no one ever thinks about getting rid of him. Everybody's definitely on his case, though."

Hall also began his career as a standup comedian and hosted the late-night Arsenio Hall Show from 1989 to 1994. He's appeared in a number of films and television series since then but has devoted most of his recent time to more standup, putting out a special on Netflix in 2019 called Smart & Classy.

The iconic James Earl Jones returns to play King Jaffe Joffer, who has since passed his throne to his son, Akeem. Jones' voice is recognizable to anyone who grew up in the last 40 years as the voice of Darth Vader in the original Star Wars trilogy or as lion dad Mufasa in The Lion King. Jones' career has spanned the Broadway stage, films, and TV, earning him three Tonys, three Emmys, a Golden Globe, and a Grammy Award.

"Of the countless roles I’ve played, King Jaffe Joffer remains one of the most enjoyable and iconic characters I’ve had the pleasure of portraying," Jones said in the press pack. "Over 30 years later, I am honored to reprise my role. ... It means the world to me to be a part of this beloved franchise."

In Coming 2 America, Lisa and Akeem are happily married and celebrating their 30th anniversary. Lisa has also imported McDowell's restaurants to Zamunda, putting her own mark on the country's economic stability.

"For decades, I've lived with this character and this film that fans love so much, Headley said in the film's press notes. "This is history, it's iconic, and I feel so blessed to be a part of it. It was great to see everyone together."

Since the 1988 original, Headley has been a staple on various TV shows, including years-long runs on three different soap operas, plus Veronica Mars, House, and Switched at Birth. She was most recently a part of the cast of Kirsten Dunst's dramedy On Becoming a God in Central Florida.

Lavelle Junson meets his dad, Akeem, while scalping tickets outside of Madison Square Garden. Actor Jermaine Fowler describes him in the notes as "a sweetheart who wants to help other people, and what he learns is that money isn’t the answer."

Fowler's been on the rise the past few years. He starred in the TV series Superior Donuts; done voice work for Tuca & Bertie, BoJack Horseman, and Family Guy; and appeared in movies such as Sorry to Bother You and Judas and the Black Messiah. Much like Murphy, he also began his career as a standup comedian.

Lavelle doesn't travel to Zamunda without his mom, played by the hilarious Leslie Jones. Jones, a veteran of Saturday Night Live, star of Ghostbusters, and the current host of Supermarket Sweep, also started out in standup and has her own Netflix special as well called Time Machine.

Mary is all about family and devoted to her son, so when she discovers Lavelle is royalty, she sets out to make sure he's treated well and brings along a whole brood to do it. "We’re bringing the energy of Queens, where it all started. I feel like Lisa has missed Queens, so bringing Queens to Zamunda was an element that was needed," Jones said in the press pack.

That family includes her brother, played by yet another SNL alum, Tracy Morgan. Fresh off his latest series, The Last O.G., Morgan is probably best to know for his characters Astronaut Jones and Brian Fellows on SNL, as well as his run as Tracy Jordan on 30 Rock, and his very own Tracy Morgan Show.

Up and comer KiKi Layne joins as Akeem's oldest daughter, Meeka, and gang, she is a bad*ss. "I love how passionate Meeka is," Layne said in the film's press notes. "I love the fight she has within her, both physically and spiritually. Meeka is a young woman who is not willing to accept traditions, but instead, she seeks to expand the assumptions about what women are capable of in the world. I think that’s a message a lot of people will connect with."

Layne made her big-screen debut as the female lead in Barry Jenkins' If Beale Street Could Talk and most recently co-starred alongside Charlize Theron in the Netflix action movie The Old Guard.

Who needs an introduction to Wesley Snipes? The man has starred in Demolition Man, Waiting to Exhale, To Wong Foo, Thanks for Everything, Julie Newmar, Blade, Passenger 57, Rising Sun, Jungle Fever, and what feels like a zillion other movies.

Snipes' character is a new addition to the story, with Gen. Izzi being the military leader of the country next door. And Akeem left Izzi's sister at the altar back in the first film. In the new movie, Izzi tries to convince Akeem and Lavelle to marry his daughter Bopoto in order to unite their countries.

But keep an eye out for more cameos. As screenwriter Barry W. Blaustein said in the press notes, "It was also fun trying to figure out how to put all the different characters back in there and we tried to include everybody [even] if you were in the original movie for five seconds."

More like this
'Girls Trip 2' Will See Our Fab Four Enjoy An International Adventure
By Maxine Harrison
Here’s Everything Coming To & Leaving Netflix In February
By Jake Viswanath
Owen Thiele Asked Sundance Attendees About Films That Don’t Exist
By Grace Wehniainen
Jennifer Coolidge Hunted For Jewels & Lashes In J.Lo’s Hotel Room
By Jake Viswanath
Get Even More From Bustle — Sign Up For The Newsletter
From hair trends to relationship advice, our daily newsletter has everything you need to sound like a person who’s on TikTok, even if you aren’t.