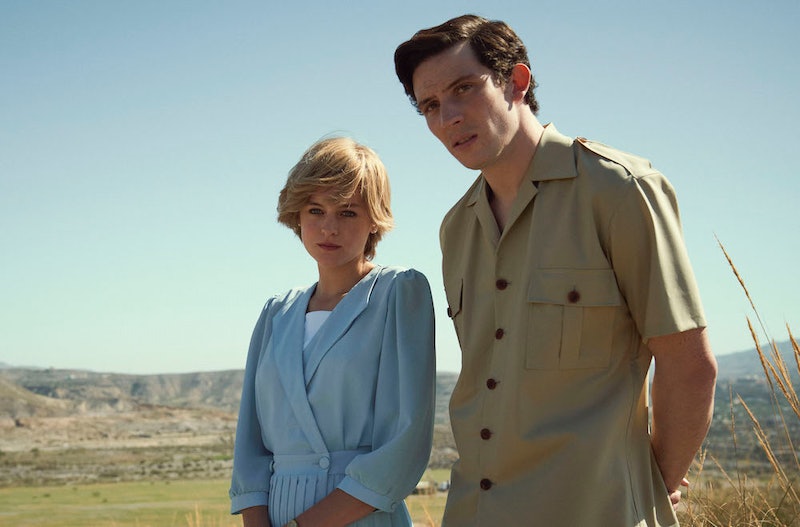 The explosive new season of The Crown may have enthralled viewers upon its debut, but the subjects of the Netflix drama are reportedly not pleased with Season 4. Sources close to the British royals have shared that the family is upset about the "cruel and unfair" portrayal of Prince Charles (Josh O'Connor) and Princess Diana's (Emma Corrin) turbulent marriage. Now, The Crown's Emma Corrin has responded to the royal family's reported disapproval, saying that she understands their reaction since the wounds are still fresh.

"We always try [to] remind everyone that the series that we're in is fictionalized," Corrin said on the Tamron Hall Show on Nov. 16. "Obviously, it has roots in reality, but [creator] Peter Morgan's scripts are works of fiction." Still, she understands the criticism. "I understand why people would be upset because this is history,” Corrin continued. "Even with Diana, you know, it's still very much fresh, I suppose, everything that happened."

Corrin then reiterated that the cast has always approached their roles as mere characters. "Peter writes such rich and complex characters," Corrin said. "And as an actor, it's such a joy to be able to really bring a lot to them."

Prince Charles' relationship with Camilla Parker-Bowles (Emerald Fennell) is also explored at greater lengths this season. Royal biographer Penny Junor told The Times of London on Nov. 16 that Prince Charles would likely be "incredibly upset" with the scene that depicted his great-uncle, Lord Mountbatten (Charles Dance), sending him a letter that expressed his disappointment with his relationship with Camilla. "It's the most cruel and unfair and horrible portrayal of almost all of them," Junor said, claiming that Morgan "invented stuff to make expensive and very rich drama."

Prince Charles' friends have also criticized the series for dredging up old drama. Per Daily Mail, Charles' friends called the season "trolling with a Hollywood budget." The Times also maintained that Prince William is upset that his parents are "being exploited and presented in a false, simplistic way to make money." Morgan, for his part, has been vocal about embellishing certain plots, but has stood by the season nonetheless.

Morgan explained the letter scene on the series' official podcast after Season 4's debut. "What we know is that Mountbatten was really responsible for taking Charles to one side at precisely this point and saying, 'Look, enough already with playing the field. It's time you got married and it's time you provided an heir,'" he said. "We will never know if it was put into a letter, and we will never know if Charles got that letter before or after Mountbatten's death, but in this particular drama, this is how I decided to deal with it."