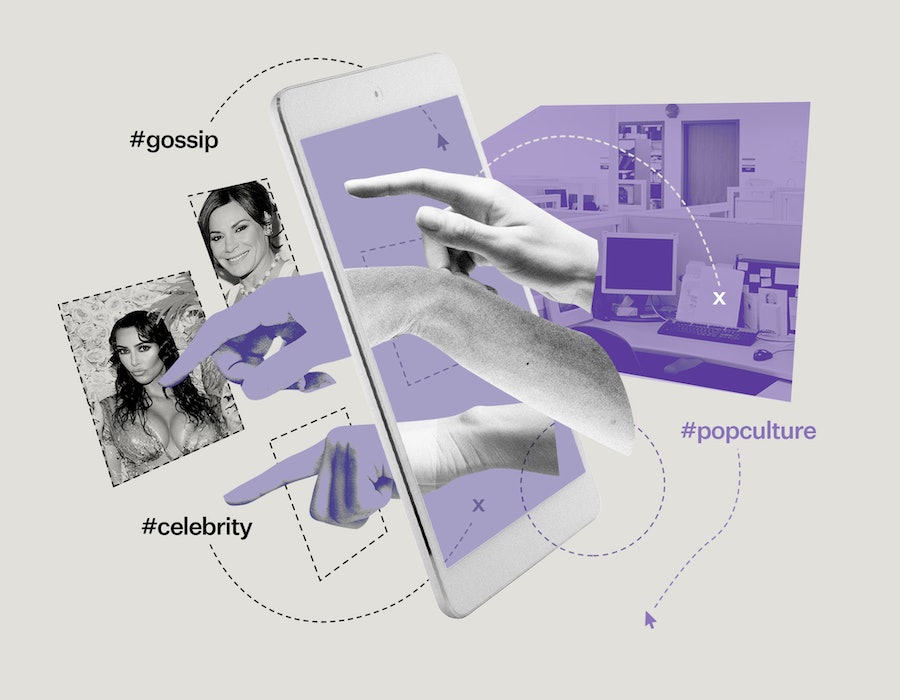 It’s lonely being Deuxmoi. While the user-submitted, un-fact-checked celebrity gossip Instagram account has amassed more than half a million followers since its March inception, broken scandals, and ushered phrases like “Chris Noth Trigger Warning” into our collective lexicon, the day-to-day of running it is decidedly less glamorous.

“Some days I’m like, ‘Why the hell am I still f*cking doing this? What’s the point?” the brainchild behind Deuxmoi tells Bustle. A sort of Elena Ferrante of gossip, very little is known about the anonymous woman who runs the account — just that she lives in New York City, has a whole other day job, and only a handful of her friends and family even know about her side hustle. (“The account isn’t about who runs it, so why attach a name to it?” she says when pressed on why she remains anonymous.) On the day we speak, she has a rare day off (she won’t reveal her occupation, but it’s required her to be back in the office since June), and she’s catching up on the stuff she hasn’t had time for while covertly running a burgeoning tabloid empire. Midway through our interview, she puts me on hold as she gets an at-home COVID-19 test; later she’s finally going to start The Undoing.

“My friends are like, ‘Just see it through. See where it goes. You've come this far.’ They're the ones telling me not to quit, but a lot of days I want to quit. It’s not worth this much pressure and stress. I keep reminding myself, it's just Instagram,” she says of the demands of being Deuxmoi. “But people send me the nicest messages, which is why I keep doing it.” Below, she offers a peek into the strange, surreal, and often isolating world of anonymously running the internet’s buzziest gossip account.

8:15 a.m.: I wake up and check Instagram. An A-lister I love requests to follow Deuxmoi. Typically celebrities won’t follow under their real account, so I was surprised to see this one did. Earlier this week somebody who I guess you could call a celebrity DMed me and said, “Everyone's obsessed with your account, but they don't follow it." So I was like, "How can they be obsessed if they don't follow?” Then I realized, “Oh, they’re following from their finstas.” They don’t want people to see that they’re following the account, I guess. It’s like a dirty little secret.

8:20 a.m.: I have thousands of follower requests to approve after a New York Times article came out about the account. If you have more than 1,000 follower requests, it won’t say that. The number stays at “999.” So I keep accepting people and accepting people waiting for the number to go down to like 987, a sign I’m in the final stretch. But the numbers don’t budge. In the end, it takes me a couple of days to actually accept all of the requests.

9 a.m.: I make a cup of coffee, get ready for work, and call an Uber. I check Instagram the whole ride there and back every day. But there are a lot of potholes and unpaved roads on the way, so sometimes my finger slips and I wind up also following the people who are asking to follow. If you're reading this and I follow you... this is why.

10 a.m.: I start work at my paid job while checking Instagram any moment I can.

11:30 a.m.: I receive an upsetting DM from someone’s management who’s unhappy with something I posted. All I can say about it is that they're concerned I’ve posted misidentifying information. I'm panicking. I check Twitter to see if there's anything about it, and there is. I take some time to figure out the best way to handle the situation — all while trying to do my job — and ultimately decide to DM the person. Then I wait, wait, wait for them to get back to me. They eventually write back and are actually really nice. I issue a retraction on my Instagram, and that’s the whole story with that.

1 p.m.: I have lunch. I love to make my own salad from Sweetgreen and I’ve recently started adding cauliflower rice to my concoction — it's a game-changer. I get the salad delivered because I literally don’t leave my desk all day; my job requires my 100% attention. From the time I get to work, let's say around 10:30 a.m., to like 5 p.m., I usually don't post unless there's something major — or I’ll do a little bit at lunch — because I need to concentrate on work.

"A celebrity DMed me and said, 'Everyone's obsessed with your account, but they don't follow it.' So I was like, 'How can they be obsessed if they don't follow?' Then I realized, 'Oh, they’re following from their finstas.'"

2 p.m.: I try to open the emails people send with tips once a week, and that’s when I'll post emails rather than DMs. Today, somebody wants to know the real scoop on why Conan O'Brien's leaving his show, but it doesn't seem to be anything scandalous. I can tell it's all pretty straightforward because the majority of information I'm getting — from people who are presenting themselves as in the know — is consistent. I’ve said this before, but I don’t research my tips. I can only determine what’s going on based on the information I get.

There's also a blind item from an email about a podcaster that's pretty funny. Also all this SoulCycle stuff is coming out. My favorite part of the account is how random it is. One tip might be about George Clooney, and the next will be about a podcaster or a C-list Disney celebrity.

5:30 p.m.: Since I usually post in the evening (from 7 p.m on), I like to get any phone calls I need to make to my friends or parents out of the way. Once I get going with posting it can be really hard to stop and talk in the middle.

7 p.m.: I always have Bravo on in the background at a pretty low volume when I’m working on Deuxmoi, but I’m not really paying attention to whatever’s on. I’m usually sitting on my bed, posting from my phone, and I’ll have my computer out too. People get very annoyed if I misspell a celebrity’s name, so sometimes I Google to make sure I’m spelling, like, Chrissy Teigen’s name right.

In order to organize everything, I made these little features that I do on different nights of the week. Opening emails is one, a Q&A is another. Tonight, I do Deuxlette, which is when I go into my screenshots and just start posting random stuff that I've taken screenshots of that I haven't had the chance to post. Some of those screenshots have been about seeing Megyn Kelly at Target, working with George Clooney, and how nice Wesley Snipes is. Once I start posting, I get more DMs. I have to keep checking the DMs, because before I know it I'll have like 50. So I just alternate between posting a couple of stories, checking DMs, and accepting follow requests all night.

1:30 a.m.: I check TikTok. TikTok is like my mini vacation from Instagram every day. I really enjoy the content. There's two guys who, honestly, are my escape. The first is Bentellect. He just reads tweets and funny memes and then laughs afterwards. The other guy who I'm obsessed with is Julian Burzynski. He recreates scenes from movies and plays all the characters.

2 a.m.: I usually take CBD at night to fall asleep and help myself relax. I've tried a bunch of brands, but my favorite right now is from a website called The Green Room. The Honolulu Haze Volcano gummies are great. I need something to fall asleep, because my mind is just still going. I don’t think it necessarily has anything to do with being Deuxmoi, though. Honestly my sleeping habits have been weird since quarantine. It’s a hard time for everyone right now.