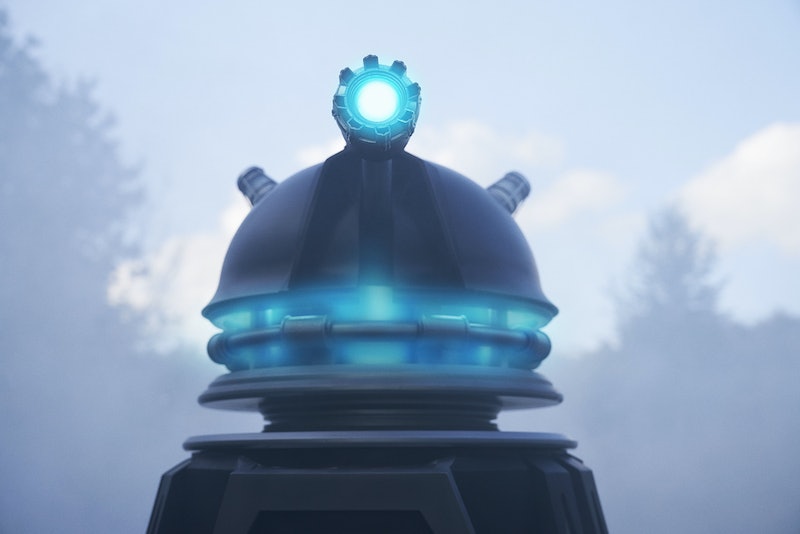 The Doctor Who January 1 special is absolutely the best way to kick off a new year. And while fans still have quite a while to wait, the Doctor Who New Year's special trailer dropped yesterday (November 29) and sees the return of a staple villain in the series — the Daleks.

Aptly titled Doctor Who: Revolution of the Daleks, the episode's trailer reveals that the extraterrestrial mutants are now being used as "defence drones" commissioned by the UK government. This great idea unsurprisingly results in an otherworldly uprising, so much so that Captain Jack Harkness (played by John Barrowman) has to make his second return of the year.

And since the Doctor (Jodie Whittaker) is still imprisoned on an asteroid following the events of the series 12 finale, it's up to Graham (Bradley Walsh), Ryan (Tosin Cole), and Yasmin (Mandip Gill) to team up with Harkness and save Britain from being annihilated by Daleks. "Stay strong, people are waiting for you," the Doctor says in her prison cell, which she's been in for quite some time, judging by the tallies on the wall.

Alongside Barrowman, Chris Noth (Sex and the City), Harriet Walter (Downton Abbey), and Nathan Stewart-Jarrett (Misfits) will also star in the episode.

Speaking about the guests stars via a press statement, Doctor Who showrunner Chris Chibnall said: "Where else would you get British acting royalty, a globally renowned U.S. screen star, an (inter)national treasure of stage and screen and one of Britain's hottest young actors — just in the guest cast?"

Chibnall continued: "Put those together with Whittaker, Walsh, Gill, and Cole (and Daleks! Did I mention Daleks?) — and you get a cast to be exterminated for. And things will explode. Promise."

Doctor Who: Revolution of the Daleks will air on New Year's Day 2021 on BBC One.