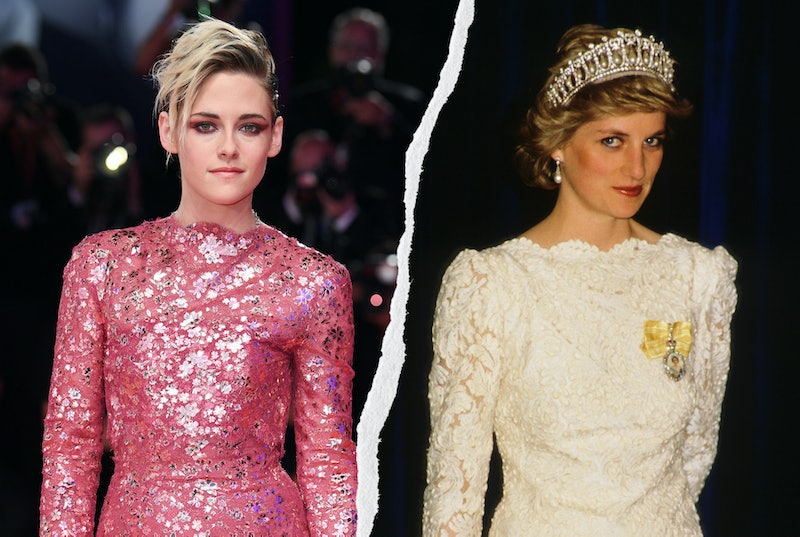 Prepare to do a double take. The first photo of Kristen Stewart as Princess Diana in Spencer has arrived on Wednesday, Jan. 27, and the resemblance is uncanny. The new film, which just began production, focuses on one pivotal point in Diana's life, taking place over Christmas weekend in 1992. While spending the holidays with the Royal Family at the Sandringham Estate in Norfolk, as per Royal tradition, Diana reclaims her own self by deciding to end her marriage to Prince Charles.

"Spencer is a dive inside an emotional imagining of who Diana was at a pivotal turning point in her life," Stewart said in a press release obtained by Bustle. "It is a physical assertion of the sum of her parts, which starts with her given name: Spencer. It is a harrowing effort for her to return to herself, as Diana strives to hold onto what the name Spencer means to her."

Stewart's casting as the People's Princess was first announced in June 2020. Spencer is being directed by Pablo Larraín and will also star Timothy Spall, Sean Harris, and Oscar nominee Sally Hawkins. Larraín also helmed the 2016 Jackie Kennedy biopic Jackie starring Natalie Portman, who earned an Oscar nomination for her performance.

Even before filming, Stewart spoke about preparing to play Diana, revealing in a November interview with InStyle that she hired a dialect coach to help her master the Royal's accent. "The accent is intimidating as all hell because people know that voice, and it's so, so distinct and particular," she said. "It's one of the saddest stories to exist ever, and I don't want to just play Diana — I want to know her implicitly. I haven't been this excited about playing a part, by the way, in so long."

Just as he did with Portman, Larraín has the utmost faith in Stewart, telling Deadline in June that she is "one of the great actors" of today. "Kristen can be many things, and she can be very mysterious and very fragile and ultimately very strong as well, which is what we need," he said. "The way she responded to the script and how she is approaching the character, it's very beautiful to see. I think she's going to do something stunning and intriguing at the same time." So far, the film's release date has not yet been revealed.