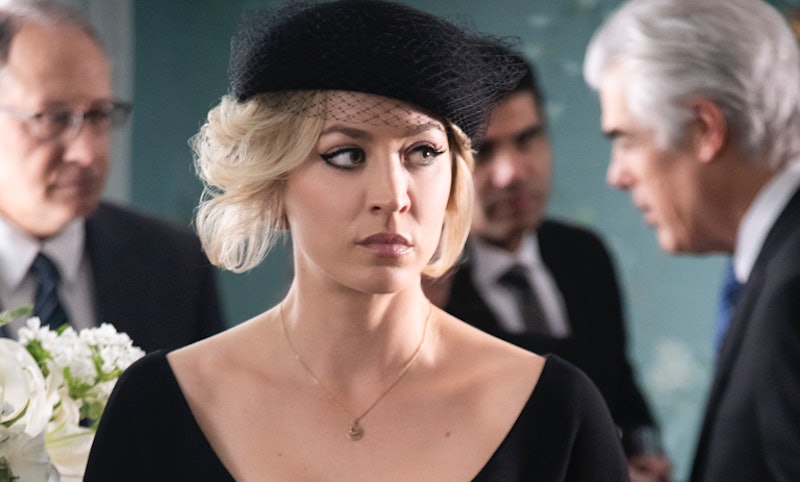 Kaley Cuoco's first major TV show since wrapping The Big Bang Theory is a project she found and helped bring to life herself. The Flight Attendant isn't based on a true story, but it is based on the 2018 novel of the same name by Chris Bohjalian. In the book, as in the series, flight attendant Cassie Bowden parties hard while on her layovers, and one morning she wakes up next to a man who's dead. She can't remember what happened the night before, leaving open the possibility that she may have killed him. But Cassie is going to lie, lie, lie her way out of attracting suspicion.

Fittingly, Cuoco told her own lie to get this project made. According to Entertainment Weekly, when looking for books to option for her first TV project, she happened upon a one sentence summary of Bohjalian's story. She told her production company to secure the rights, and they asked if she'd read the whole book — so she said she had. "I had not read the book, but I knew I would like it. So I just kind of told a little white lie to get this stuff going because it takes a long time," she said. Cuoco was passionate enough about the novel to option the rights before it had even been published. "I have a very strong gut feeling, and ... when I saw this book and I read this girl, I thought, 'Oh my God, this would make a really fascinating TV character,'" the actor added to Entertainment Tonight.

It took three years for the project to go from an idea in Cuoco's head to a TV show now airing on HBO Max. It's a limited series, since it's based on a one-off novel, but we've all seen how miniseries can extend into second seasons if the fan base is there (hello Big Little Lies). However, right now it seems Cuoco is just focused on people seeing this season after years of hard work. As she told ET, "It's amazing to see this come to life 'cause it really has been my baby ... it gets better and better and better."