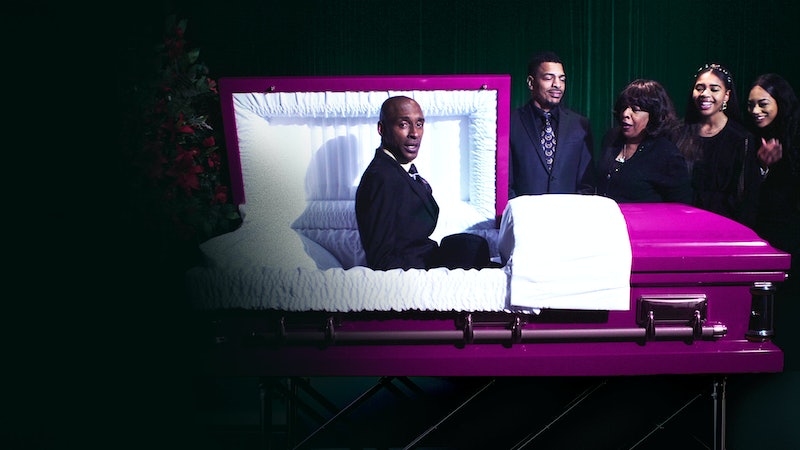 When you think of television shows about funeral homes, the first (and likely only) example that comes to mind is HBO's acclaimed scripted series Six Feet Under. But with their new reality series Buried By the Bernards, Netflix is providing a drastically different — and more humorous — view on the funeral industry.

Buried By the Bernards follows the lives of the Bernards, an eccentric family who owns a funeral home in Memphis, Tennessee, called R Bernard Funeral Services. The Bernards — consisting of funeral home owner Ryan Bernard, his mother Debbie, his daughters Deja and Raegan, and his Uncle Kevin — first gained some attention when a commercial they shot soon after opening their business in 2017 went viral for featuring a drive-thru window for viewing the deceased.

The second time the Bernards' funeral home went viral, it was for the commercial below, in which Uncle Kevin stars as a dead body that pops up out of a casket to exclaim his surprise at the shockingly low prices R Bernard Funeral Services offers on their funeral packages. Trust me, you'll have to see it to believe it.

Under most circumstances, a show about a family running a funeral home would be decidedly uncomical, but the Bernard family manages to bring some levity to the work with their absurd antics and entertaining banter. In an interview with a local Memphis news station, the Bernards explained that how viewers will see them interacting on the show is exactly the same way they behave when the cameras aren't around. “[Netflix] had to literally come down here and meet us before they started the show because they thought we were actors," said Deja Bernard. "They didn’t think we were a real family and we said no, this is actually us, on a daily basis.”

Although the majority of Buried By the Bernards was shot in early 2020 before the pandemic began, R Bernard Funeral Services is currently still in business. And, on a more serious note, their once-gimmicky drive-thru window has actually become a useful addition to the business during the COVID-19 pandemic, allowing families to grieve their loved ones while still adhering to social distancing guidelines.