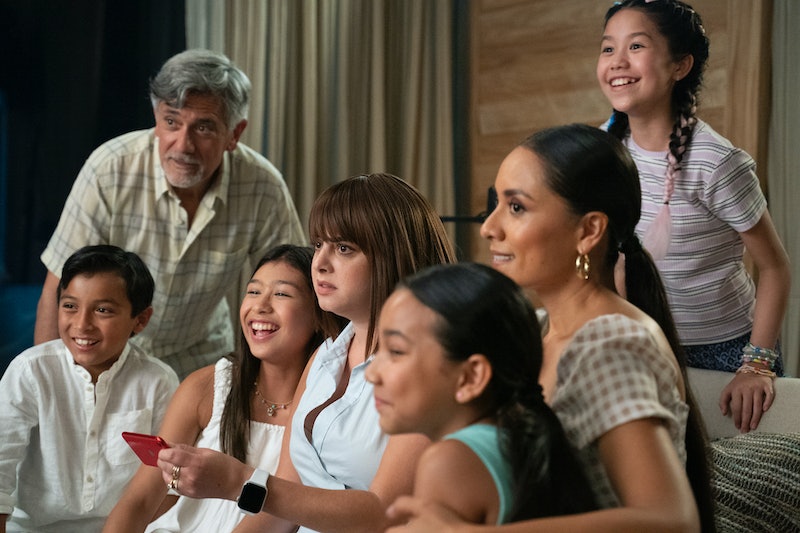 The Brothers Garcia is getting a revival after running for four seasons from 2000 to 2004 on Nickelodeon. Now, HBO Max is bringing the family comedy back to the screen. Much of the original cast is set to return, as the original Garcia family members are grown up and managing families of their own. However, with a bigger family comes a bigger cast — get to know the cast members, old and new, ahead of the premiere on April 14.

After playing Sonia in the Nickelodeon series, Maris went on to star in the soap opera series One Life to Live. She played Aurelia Rivera for eight years before leaving the show, only to ultimately take a short break from acting in 2013. In 2018, she returned to screens as Dita Galindo in FX’s Sons of Anarchy spinoff Mayans M.C.

After playing Ray Garcia in the original series, Lacamara has gone onto to appear in several different beloved television series across the last two decades. He’s lent his talents to the likes of Desperate Housewives, Suits, Crazy Ex-Girlfriend and The Goldbergs. Lacamara also played the part of Carly’s father in the 2020 holiday romp Holidate.

Once The Brothers Garcia concluded, Licon went on to appear in several crime procedurals on primetime television. In the last two decades, Licon has appeared on The Mentalist, The Closer, CSI: Miami, Cold Case, and NYPD: Blue. A return to the Garcia household will probably be a change of pace.

After The Brothers Garcia wrapped in 2004, Pitynski went on to lend her voice to the series Fatherhood, which ran from 2004 to 2005. She also appeared in one episode of the television series Rodney, which aired in 2005. Her roles in Fatherhood and Rodney stand alone as her only credits between the original Garcia series and the reboot.

Much like Pitynski, Gonzalez has a very sparse acting resume since the original series finished. In 2010, he appeared in a short film called Effections and in Contratiempo six years later in 2016. Now, another six years later, Gonzalez is returning to the screen with the HBO Max reboot.

In much the same fashion as both Gonzalez and Pitynski, Alvarez’s acting credits don’t extend very far beyond the original series. While performing on The Brothers Garcia, Alvarez also appeared on shows like The Bernie Mac Show, Beverly Hills, 90210, and ER. However, The Garcias will be Alvarez’s first acting performance since the predecessor series aired.

Before his role on The Garcias, Alexander appeared in the 2019 horror blockbuster The Curse of La Llorona. One year later, he was cast in a single episode of 9-1-1: Lone Star, as well as in the series L.A.’s Finest. He also has two short film credits to his name, The Humming of the Beast and #Whitina.

In 2017, Chama appeared as Itzel in the Emmy-winning series American Crime. Since then, she’s appeared in three short films: Neemkomok’ and Us, both of which came out in 2017, as well as the 2020 short film Wrong Number.

The Garcias will mark Kim’s third acting credit to date. In 2016, she appeared in Hannah, before landing a recurring role on the TV series Hitbaby.

Severy’s first credit came as an extra in a skit for Jimmy Kimmel Live, before she made the transition to short films. She appeared in two shorts in 2020, Sleepwalker and Swim to Steven, before appearing in the her first feature, 2021’s Bigfoot Famous.

In 2021, Bliss appeared in Mr. Corman, which was the only credit to her name before being cast in The Garcias. However, the young performer may be set to become a much bigger star in the coming years. Bliss has been cast as Tuktirey in the next three Avatar films directed by James Cameron, which are scheduled to release in 2022, 2024, and 2026.