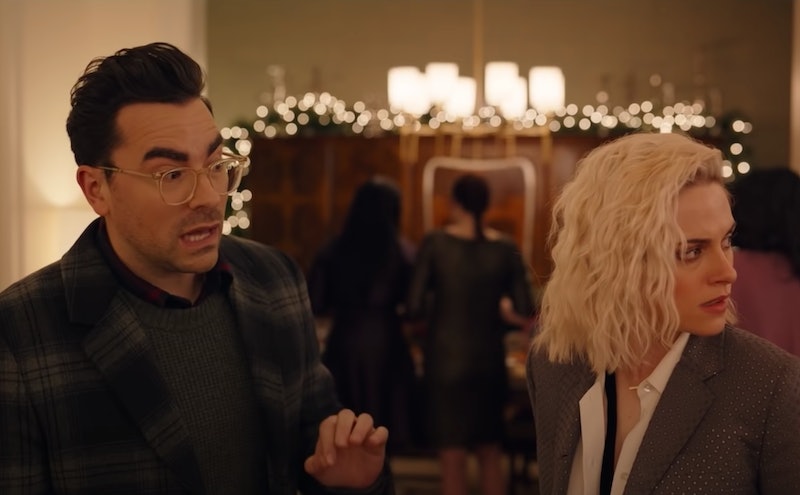 The holiday season is about to get some rare LGBTQ+ representation, thanks to Kristen Stewart and Hulu. The Happiest Season trailer, released by the streaming service on Monday, Nov. 9, shows Stewart in her rom-com debut. The actor will star alongside Mackenzie Davis and Schitt's Creek's Dan Levy in a queer holiday rom-com that David and Patrick would be so proud to watch. Well, if David was feeling festive, that is.

The new holiday movie follows a young out-and-proud lesbian Abby (Stewart) who plans to travel to her girlfriend Harper's (Davis) hometown for Christmas to finally meet her family and propose. However, her plans to get engaged are suddenly halted when Harper confesses that she hasn't come out to her family, resulting in Abby having to pretend that she's just a straight friend — and an orphan.

The traditional holiday hijinks ensue as Abby balances hiding their relationship with questioning it entirely. Her gay best friend John (Levy) keeps track of it all from afar but ultimately comes to save the day. And yes, he pretends to be straight, too. Happiest Season also stars Aubrey Plaza, Alison Brie, Mary Steenburgen, Victor Garber, and Mary Holland, who co-wrote the script alongside writer-director Clea DuVall. It also marks Levy's first major project since the Emmy-winning final season of Schitt's Creek finished airing back in March.

In an interview with People, Duvall said that she was inspired to make the film because queer Christmas stories are long overdue. "I'm a huge fan of Christmas movies, but I had never seen my story represented," she said. "Happiest Season felt like a great opportunity to tell a universal story from a new perspective." Stewart, who is openly queer, joined the film for the same reason. "I think I've wished to see a gay Christmas rom-com my whole life," she said. "I'm so happy and proud of Clea for bringing this into the world."

The Twilight alum told Entertainment Weekly that she was also inspired by the film's unapologetically uplifting tone, which leaves viewers with no questions on whether Abby and Harper will stay together, as other LGBTQ+ films depict. "You're not watching [Happiest Season] and going, 'God, what's going to happen to them, because the world is scary?'," she said. "You already know. It's a f*cking rom-com holiday movie. It'll work out. And you want to see how it does. It's relieving, allowing yourself to breathe. It's a new feeling."

The film was originally scheduled to be released in theaters on Nov. 25, but due to the COVID-19 pandemic, Happiest Season will now stream on Hulu on the same day.