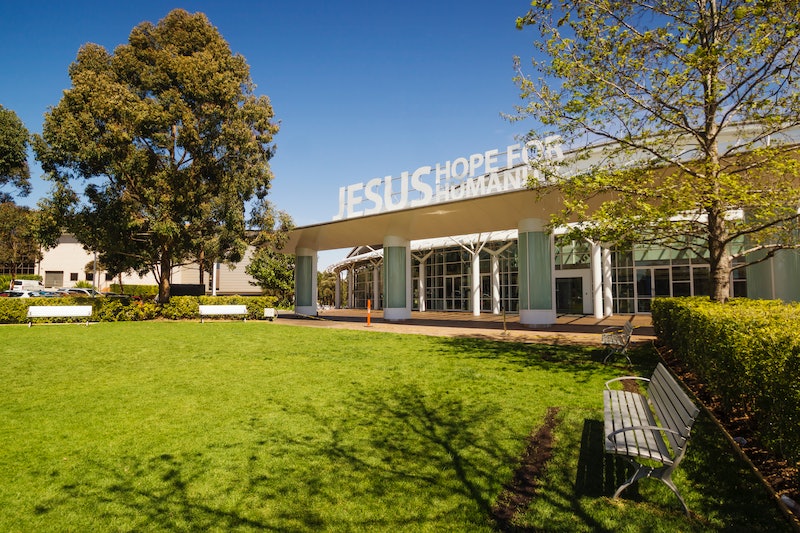 Justin Bieber, Selena Gomez, Chris Pratt, and Kylie and Kendall Jenner are just a few of the famous people who’ve been spotted attending services at Hillsong. The global megachurch was known for attracting celebrities in the late 2010s. But though it still boasts 150,000 weekly worshipers, it’s also been mired in several scandals since its inception in 1983. The three-part Discovery+ docuseries Hillsong: A Megachurch Exposed re-examines the church’s tangled history — including the recent downfalls of co-founder Brian Houston and its most famous pastor, Carl Lentz.

Houston co-founded Hillsong with his wife Bobbie in the western suburbs of Sydney, Australia as an offshoot of his father Frank Houston’s Sydney-based Pentecostal church. In August 2021, New South Wales authorities arrested Houston on charges of concealing child sex offenses, alleging that he “knew information relating to the sexual abuse of a young male in the 1970s and failed to bring that information to the attention of police.”

Houston said he was shocked by the charges given how “transparent” he’s always been about the matter, suggesting that claims were related to allegations that his father, Frank, had abused a boy over several years in the 1970s. “I vehemently profess my innocence and will defend these charges, and I welcome the opportunity to set the record straight,” Houston said in response. Meanwhile, Hillsong said in a statement that the church was disappointed that Houston had been charged and asked that he be afforded the presumption of innocence and due process.

In January 2022, Houston stepped away from his ministry duties, citing a need to fight the criminal charge of concealing his father’s alleged past child sexual abuse. However, he was also under an internal investigation himself, and on March 18, Hillsong revealed that Houston had violated the church’s code of conduct by entering the hotel room of an unidentified woman for 40 minutes while under the influence of alcohol and prescription drugs during the church’s annual conference in 2019. Hillson also said that Houston exchanged an “inappropriate text message” with a staffer in 2013, “along the lines of, ‘If I was with you I would like to give you a kiss and a cuddle or a hug,’” resulting in her resignation. Hillsong blamed Houston’s actions on “sleeping tablets,” per the Christian Post.

On March 23, Houston resigned from Hillsong. “We acknowledge that change is needed,” the Hillsong board said in a statement to The New York Times.

Prior to his resignation, Houston fired Lentz as the lead pastor at Hillsong’s New York City location in November 2020, citing “leadership issues and breaches of trust, plus a recent revelation of moral failures.” Lentz addressed his termination in a 2020 Instagram post revealing that he had cheated on his wife, Laura. “I was unfaithful in my marriage, the most important relationship in my life and held accountable for that,” he captioned a family photo with Laura and their three children, Charlie, Ava and Roman, in part. “This failure is on me, and me alone and I take full responsibility for my actions.”

Later that month, 34-year-old jewelry designer Ranin Karim revealed in Vanity Fair that she was the woman who had an affair with Lentz after they met earlier that year. She claimed that she tried to end the relationship that September, and Lentz’s wife learned of the affair the following month. “I know what I got myself into, but at the same time I wanted to do the right thing and walk, walk away,” she told the magazine. “I am not a monster.”

Though she wasn’t a church member, Karim also appears in Hillsong: A Megachurch Exposed to share her experience with Lentz. “It was the most toxic thing I ever had to deal with,” she claims. Another woman, Leona Kimes, who’d worked for the Lentzs as a nanny, also alleged that Lentz took photos of and touched her without permission, and that both he and Laura had mocked and bullied her daily. She claimed that when she tried to tell pastors at Hillsong, they "blamed and silenced" her. (In a May 2021 letter to the church, Houston wrote that Kimes’ experience was “very disturbing” and that she had the church’s “full concern and pastoral support.”)

Lentz famously had a close friendship with Bieber, but the singer clarified in a January 2021 Instagram Story that Hillsong is no longer his church and that he’s “part of Churchome.” It’s unclear, however, how many other people have left Hillsong in the wake of the recent scandals.

More like this
Ashton Kutcher Wants Danny Masterson “To Be Found Innocent” In Rape Retrial
By Jake Viswanath
Everything To Know About 'The Real Housewives Ultimate Girls Trip' Season 4
By Jake Viswanath
Pamela Anderson’s Dating & Marriage History Could Be Its Own TV Series
By Jake Viswanath
Andy Cohen Apologized To Larsa Pippen After A 'RHOM' Season 5 Reunion Dust-Up
By Brad Witter
Get Even More From Bustle — Sign Up For The Newsletter
From hair trends to relationship advice, our daily newsletter has everything you need to sound like a person who’s on TikTok, even if you aren’t.