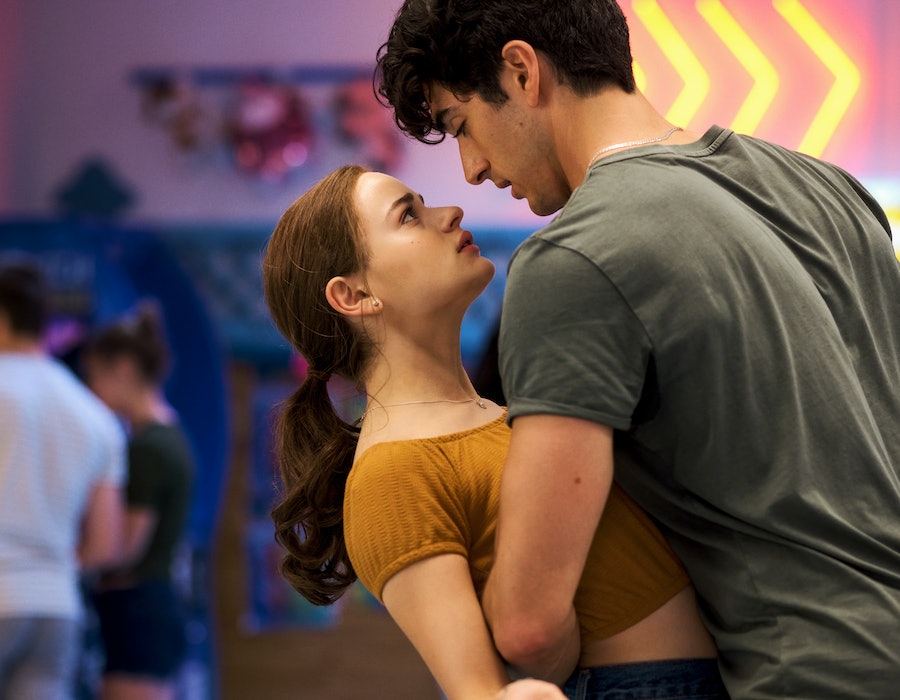 After a swoon-worthy love story, can Elle Evans and Noah Flynn make long distance work? On Monday, Netflix dropped the trailer for The Kissing Booth 2, teasing a brand new love triangle for the high school sweethearts. The Kissing Booth 2 will premiere on July 24 and bring back the core cast, with Joey King as Elle, Jacob Elordi as Noah Flynn, and Joel Courtney as Lee Flynn. But there will also be a few notable new additions that could spell trouble for Elle and Noah.

The Kissing Booth 2, based on the YA novel by Beth Reekles, picks up where the original film left off, with Noah in college at Harvard and Elle returning to high school for senior year. Unfortunately, their long distance relationship becomes complicated after Elle meets a “charismatic new classmate” named Marco, played by Taylor Zakhar Perez, and Noah befriends a “seemingly-perfect college girl” named Chloe, played by Maisie Richardson-Sellers, according to the official synopsis.

The Kissing Booth followed teenage best friends Elle and Lee (Noah’s little brother), who made a pact not to date each other’s siblings, but the promise becomes difficult to keep after Elle and Noah have an unexpectedly romantic encounter at a carnival kissing booth. It premiered on Netflix in 2018, and became an instant viral hit. Netflix chief content officer Ted Sarandos even claimed that The Kissing Booth was “one of the most-watched movies in the country, and maybe in the world,” as per Vulture. The streaming platform notoriously doesn’t release viewership data, but given the film’s epic following online, it’s no surprise the platform had a follow up in the works.

Netflix announced The Kissing Booth sequel on Valentine’s Day of 2019, but didn’t offer a formal date for the premiere until a full year later. King revealed The Kissing Booth 2 release date in May of 2020, during a “Kissing Booth Secrets Live” online event, confirming it would drop on July 24. The livestream also included a fan Q&A, movie trivia, and introductory interviews with Perez and Richardson-Sellers, who play new love interests in the sequel. At the time, Perez teased that his character, “a musical and charismatic new classmate,” would “form a close relationship” with Elle. All three actors hinted the new connection would result in plenty of drama for the couple.

Of course, Kissing Booth 2 won’t be all love triangles and relationship drama, it will also focus on Elle and Lee’s college journey. The two BFFs always dreamed of going to college, bu now that they’re actually faced with the decision, will they change their minds?

Fans can be certain Elle and Noah’s long distance relationship will bring plenty of new surprises and shenanigans into the mix, and will have to tune out to see if their high school romance is strong enough to last.

More like this
Here’s Everything Coming To & Leaving Netflix In February
By Jake Viswanath
Netflix Shut Down 'Bridgerton' S3 Rumours About A “Very Dark” Storyline
By Bustle
Rupert Grint Just Shared A *Major* Update About Ron Weasley’s Future
By El Hunt
This New Dating Show Is Netflix's Answer To 'Bachelor In Paradise'
By Grace Wehniainen
Get Even More From Bustle — Sign Up For The Newsletter
From hair trends to relationship advice, our daily newsletter has everything you need to sound like a person who’s on TikTok, even if you aren’t.