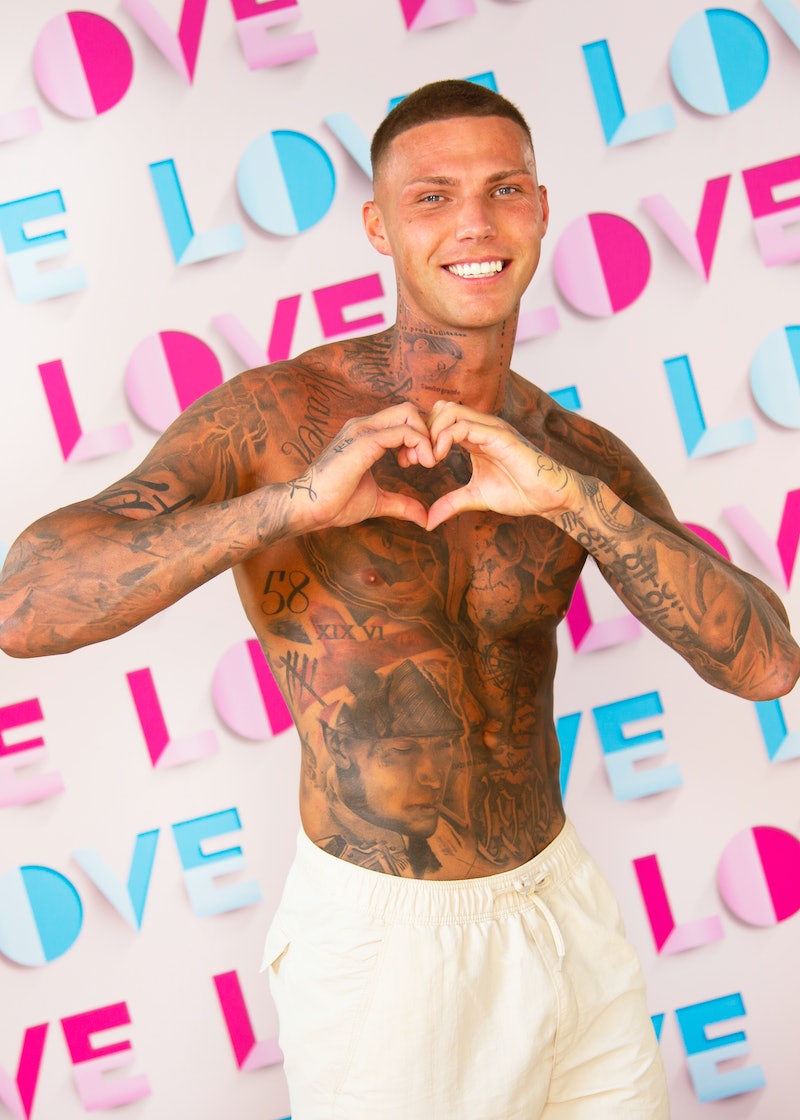 Love Island’s Danny Bibby entered the villa on July 16 as the latest male bombshell (contestants who are introduced as the show progresses to shake things up). However, even before he walked in fans of the show were calling for him to be removed, due to evidence that he’d used the N-word on social media. Now ITV has released an apology from the contestant for the racist language he used on his Instagram page.

The Independent outlined that this is a pretty unprecedented situation for Love Island as ITV have rarely made an islander aware of news headlines outside of the villa, much less allowed them to publish a response while remaining on the show. Meanwhile, viewers have questioned whether ITV is showing proper duty of care to the other contestants, particularly those who are Black, by allowing Danny to remain on the show without informing them of his actions. Here’s everything you need to know about the controversy.

Danny Bibby’s entrance to the 2021 Love Island villa was teased on July 15. However, as fans sought out his social media pages to check out the 25-year-old plumber, they found that he’d used racist language in an Instagram post in 2019.

The picture in question was Bibby on holiday. It was posted in Nov. 2019 and has since been deleted. The original comment was from a follower who is white, and read, “Champ”, with Bibby replying using the N-word. Screenshots quickly circulated on Twitter and many called for Bibby to be removed.

What have ITV, Danny, and Danny’s family said?

ITV told Bustle UK that its team had “raised our concerns with Danny regarding a historic social media post” on July 16. They released a statement on Bibby’s behalf. "I'd like to take the time to apologise to anyone that may have taken offence to my inappropriate remark. I never meant anything malicious by this comment at all,” the contestant said.

Bibby continued, “I am not a racist person and it's unacceptable language and ignorant. I meant no offence and feel like I have really learnt from my mistakes and will never use that word again. I am a kind loving person and hopefully, you get to see that in the show."

According to a report published in the Sun, the researchers who work on Love Island comb through potential islanders social media posts and pages. The publication explained that the show looks for any comments, tweets, or posts that are racist, sexist, homophobic, or bullying in nature. Islanders are also vetted for criminal records, according to the Sun. The fact that Danny’s use of a racist slur has slipped through the net has led some to question whether Love Island’s processes are rigorous enough.

Bibby’s father, Richard has also published a statement in reference to his son’s use of racist slurs. “Danny does not have a racist bone in his body and there were no racist intentions to this post. Although it was not done maliciously, it was a mistake,” he said, “I absolutely apologise on his behalf for the offence this wording may have caused. That would never have been his intention.”

What have viewers said?

Many Love Island viewers were left outraged and disgusted by Bibby’s use of the N-word on social media and the fact that he was then allowed to continue his time in the villa. Some have urged ITV to remove him from the show.

Tyla social media editor Tobí Akingbadé wrote on Twitter, “Extremely uncomfortable watching Danny interact with Aaron like that knowing what we know on the outside. I want to vomit.” A viewer called Lotti G asked, “what I want to know is why Danny hasn’t been kicked out yet for openly saying the N-word on this insta?”

Others expressed concern that the other islanders had not been made aware of the situation unfolding outside of the villa and why Bibby was releasing a statement. “So you know how they let Danny apologise from inside the villa… do the other islanders know what he did?? Has he addressed anything?” wrote Metro editor Ellen C Scott.

BBC correspondent Megha Mohan agreed, “This is really important. Because if there is someone in the #LoveIsland villa has said the N-word and the Black contestants haven’t been told, that is an astonishing lack of duty of care from a production outfit that publicly said they will commit to doing better.”

Former Love Island contestant Sherif Lanre has accused ITV of “double standards” when it comes to its treatment of Black contestants vs white ones. Lanre appeared in the 2019 villa and ITV stated that he had agreed he should leave the show after he accidentally kicked Molly-Mae Hague in the groin and joked that it was “a c*** punt.” Hague later told Digital Spy and other press that she had “no beef with Sherif” adding that she “love[d] the boy to pieces.”

Lanre told the Sun, “A white guy has been allowed to apologise from inside the villa for using the N-word and carry on filming, whereas I was removed for play fighting and doing something by accident. The N-word shouldn’t be used and this contestant should be removed from the house like I was, especially after the England football team were racially abused... ITV need to set an example.”