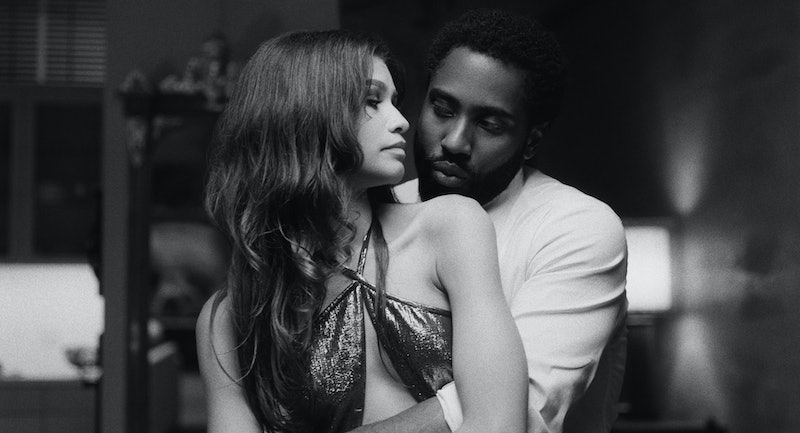 How old is too old to play someone's lover? May-December romances have and always will exist, but Hollywood has always had an age gap problem. "It seems like time and time again, male movie stars are allowed to age into their forties, fifties, and even sixties while the ages of their female love interests remain firmly on one side of the big 4-0," Slate wrote in 2015. That same year, film data researcher Stephen Follows concluded that when it comes to romance in movies, on average, men have always been older. The latest film with an age gap that is making some turn their heads is Malcolm & Marie, the black and white drama streaming now on Netflix which stars Zendaya and John David Washington.

In Malcolm & Marie, directed by Euphoria creator Sam Levinson, Washington plays a budding filmmaker who has just released his breakthrough film. Zendaya plays his girlfriend and muse; the person whose life on which his film is based. When the two return home from the movie's celebratory premiere, the evening suddenly takes a turn. But for all of its romance and rumble, does Malcolm & Marie have an age gap problem?

In real life, Zendaya is 24 years old while Washington is 36, creating an age gap of 12 years. It's not the biggest romantic age gap in movie history, but in 2021, after years of people talking about how Hollywood handles these kinds of relationships, what female actors have experienced in Hollywood, and calls to do better, it's still a bit jarring. Fans on Twitter became vocal about how the age gap was a little weird, and that their paring was acerbating a deeper Hollywood problem.

How Does The Film Address It?

The age gap between Zendaya and Washington does feel a bit intentional once you've seen the film. Minor spoilers ahead. In the story, Marie is about 25 and it's mentioned that she and Malcolm have been together for 5 years. It's never said exactly how old Malcolm is supposed to be, but it's implied that he's older, perhaps in the mid-30s range that Washington is in real life. Their relationship does have some lingering issues surrounding that age gap, however. Malcolm and Marie met when she was about 20 when she was still an addict, and it was with Washington's help that she recovered and went through rehab. But Marie still mentions that she was at a vulnerable age and that Malcolm may have taken advantage of the power dynamics at play.

What Have The Stars Said?

The two actors do understand the controversy around their age gap, but Zendaya for one believes that the issue arose simply because of her past as a Disney star and the fact that she currently plays a teen on Euphoria. "I've played a 16-year-old since I was 16. You have to remember, also, people grew up with me as a child," she told E! News. "It's like watching, I guess, your younger sibling now, you know, they're grown. … So it's hard for people to wrap around the idea that I am grown in real life. You know, even though I do play a teenager on television still."

Washington tells Variety he wasn't concerned, "because she is a woman. People are going to see in this film how much of a woman she is. She has far more experience than I do in the industry. I’ve only been in it for seven years. She’s been in it longer, so I’m learning from her. I’m the rookie. I was leaning on her for a lot...I appreciated her wisdom and discernment when it comes to this business."

Zendaya is indeed a grown woman but Malcolm & Marie's age gap and power dynamics may still make some uncomfortable.

More like this
Lindsay Lohan & Jonathan Bennett Celebrated Mean Girls Day Very Differently
By Jake Viswanath
What’s New On Netflix: Ana De Armas’ 'Blonde' & A Nick Kroll Special
By Arya Roshanian
Here’s Everything Coming To & Leaving Netflix In October
By Jake Viswanath
These 25 International Horror Movies On Netflix Prove Fear Is A Universal Language
By Bustle Editors
Get Even More From Bustle — Sign Up For The Newsletter