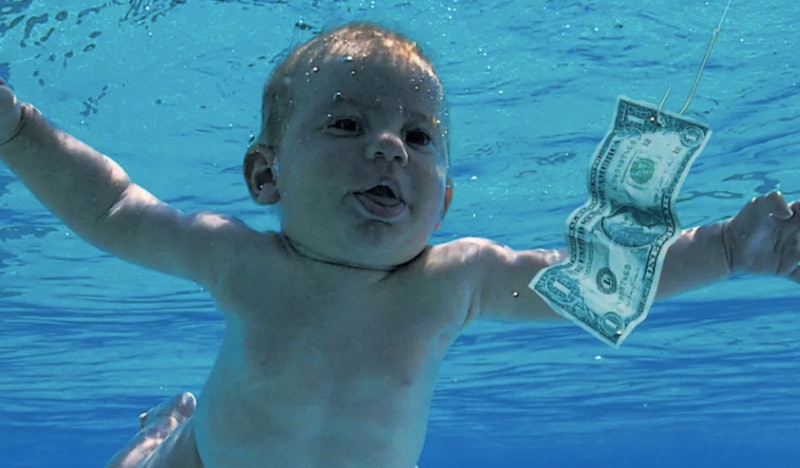 Spencer Elden, who appeared nude as a baby on the cover of Nirvana’s 1991 Nevermind album, is suing the band, claiming he was sexually exploited as a child.

Elden, now 30, has filed a lawsuit in a Californian District Court against 15 defendants including surviving members of the band Dave Grohl and Kris Novoselic; Kurt Cobain’s widow Courtney Love; photographer Kirk Weedle; and the record labels that have been involved in Nevermind’s release and distribution since 1991. He is requesting damages of at least $150,000 from each individual (over $2 million in total) and is asking that the album cover be censored to hide his genitals.

Elden alleges that his parents never signed a release authorising the use of the image at the time. He said that his “true identity and legal name are forever tied to the commercial sexual exploitation he experienced as a minor which has been distributed and sold worldwide from the time he was a baby to the present day,” per BBC News.

Elden added that the album cover has caused him to “suffer lifelong damages,” “extreme and permanent emotional distress,” and an “interference with his normal development and educational progress” leading to “medical and psychological treatment.”

His lawsuit also alleges that the nude image constitutes child pornography, with the legal papers filed in California stating, “The images exposed Spencer's intimate body part and lasciviously displayed Spencer's genitals from the time he was an infant to the present day.”

Non-sexualised photos of infants are generally not considered child pornography under U.S. law. However, one of Elden's lawyers, Robert Y. Lewis, has argued that the inclusion of the dollar bill (which was superimposed after the photograph was taken) makes Elden seem “like a sex worker.”

Another of Elden’s attorneys, lawyer Maggie Mabie, told The New York Times that her client is “asking for Nirvana to do what Nirvana should have done 30 years ago and redact the images of his genitalia from the album cover.”

Elden has recreated the album cover several times since its release, which Mabie said he has come to realise led to the “image of him as a baby being further exploited.”

None of the named defendants have officially commented on the lawsuit. However, on Aug. 25, Courtney Love made a Facebook post which said, “I’ve got nothing much on my mind. Except weird 🤦‍♀️✨🍕 lawsuits”.