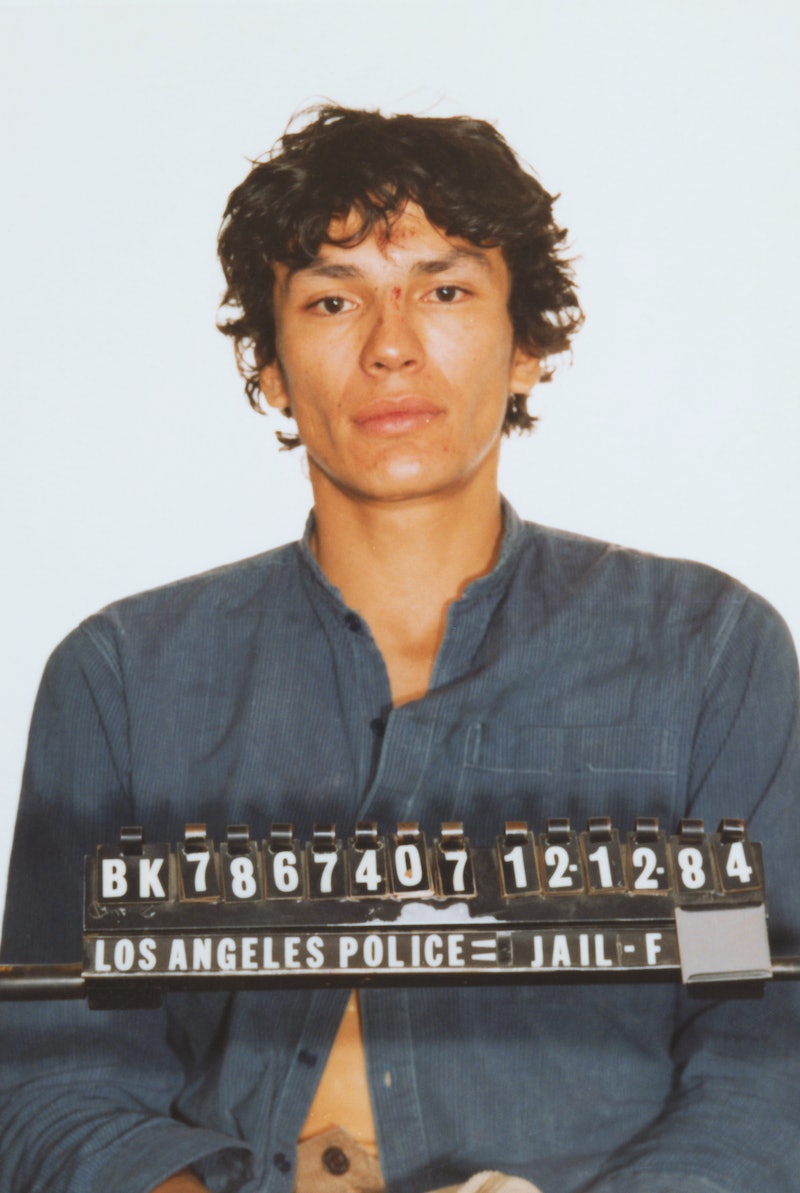 Netflix's new true crime series Night Stalker: the Hunt for a Serial Killer retraces the crimes of serial killer Richard Ramirez. But it's very deliberate in its approach. Ramirez was upheld as a sex symbol among some women during his trial in the '80s, and director Tiller Russell didn't want to put him back in the spotlight, instead telling the story through the perspective of two detectives who worked on the case. "It was really important to me not to fall prey to what I felt like was false mythology," Russell told The Guardian. “This guy is not the Jim Morrison of serial killers. There's nothing cool about this."

Ramirez was convicted in 1989 on 13 brutal murder counts as well as rape charges and burglary counts. Years after he was put on death row, his DNA was linked to the unsolved rape and murder of a 9-year-old girl. He was never tried for the crime, as he was already in prison, but it would have marked the first in his spree of killings that terrorized California from 1984 until 1985. Here's what else you need to know about the case ahead of Night Stalker: the Hunt for a Serial Killer's premiere.

Who Was Richard Ramirez?

According to The New York Times, Ramirez was introduced to the world of murder via his cousin Miguel Ramirez, who returned from the Vietnam War with photographs of women he said he'd raped, tortured, and killed. A year later, Miguel shot and killed his wife — which a then-13 year old Richard Ramirez was present for — ultimately getting sentenced to seven years in prison. It was around this time that Ramirez began burglarizing homes, setting into motion his later crimes.

As reported by The Guardian, Ramirez chose his targets randomly as he carried out burglaries, mostly by entering unlocked windows in the dead of night. Per Inside Edition, his victims ranged in age from 16 to 79 (not including the 9-year-old whose death he was linked to) and encompassed both men and women, though not all of his victims died.

According to the Los Angeles Times, 21-year-old Maria Hernandez survived when Ramirez's close shot to her face ricocheted off her keys. She later testified against him in court, helping to get justice for her roommate, who Ramirez did kill. It was also because of one of his survivors that Ramirez ultimately got caught. Per The New York Times, the victim was able to glimpse Ramirez's car while he attacked her and subsequently described it to police, who alerted the public. A teenager later saw the same car and reported the license plate to police, who found it, got a fingerprint from it, and confirmed Ramirez's identity. Soon, his photo was everywhere, and when he tried to steal another car, a group of people recognized him and called the police.

According to UPI, Ramirez's final victims in August 1985 were Bill Carns and Inez Erickson, who both survived Ramirez's attack despite Carns being shot three times in the head. Erickson helped identify Ramirez in a police lineup, and Ramirez was eventually tried and sentenced to death.

Many won't forget Ramirez's parting words to the jury who sentenced him to death. "Big deal. Death always went with the territory. See you in Disneyland," he said, per Inside Edition. Shortly after his sentencing, Ramirez spoke about his "evil" nature in an interview with reporter Mike Watkiss. "Yes, I am evil. Not 100%, but I am evil," Ramirez said. "We are all evil in some form or another." He added that he had "no comment" on whether or not her possessed emotions.

In 1993, he gave another interview, this time to Inside Edition. He tried to justify the behavior of serial killers, saying, "A serial killer comes about in his circumstances, like a recipe – poverty, drugs, child abuse. These things contribute to a person's frustration and anger and at some point in life, he explodes." However, Ramirez said that he didn't think that was the case for him. "I am not going to blame society, my race, or people, or anything. It is up to the individual like myself to keep on knocking into whatever world they want to get into," Ramirez said. He also stood by his indifferent response to his death sentence, saying, "I don't care about myself, really. I don't care about what happens to me. I never did, really."

Extensive Ramirez interviews were also conducted and compiled by author Philip Carlo for his 1996 book, The Night Stalker: The Disturbing Life and Chilling Crimes of Richard Ramirez. In it, Ramirez at one point chillingly explained that, "There is no set rule, there is no proof positive, that once you come into contact with a serial killer that you will survive the encounter ... they have made up their minds before they even encounter you and, uh, there is no way out of it."

Despite his crimes, Ramirez fascinated many women, including magazine editor Doreen Lioy. Per the NYT, she began writing to Ramirez after his 1985 arrest, and the two started a relationship. He proposed in 1988 and they married in 1996. Carlo wrote that Lioy's family, including her twin sister, disowned her for the relationship — but she didn't seem to care much. "Once I was married to Richard, I would have a new family; his family would become mine," she reportedly said. In an interview with CNN, she described Ramirez as kind, funny, and charming. "I think he’s a really great person. He's my best friend; he's my buddy."

However, after Ramirez was linked to the death of the 9-year-old girl, Lioy reportedly left him in 2009.

The serial killer spent the remainder of his life on California's death row until he died in 2013 of liver failure. He was 53.