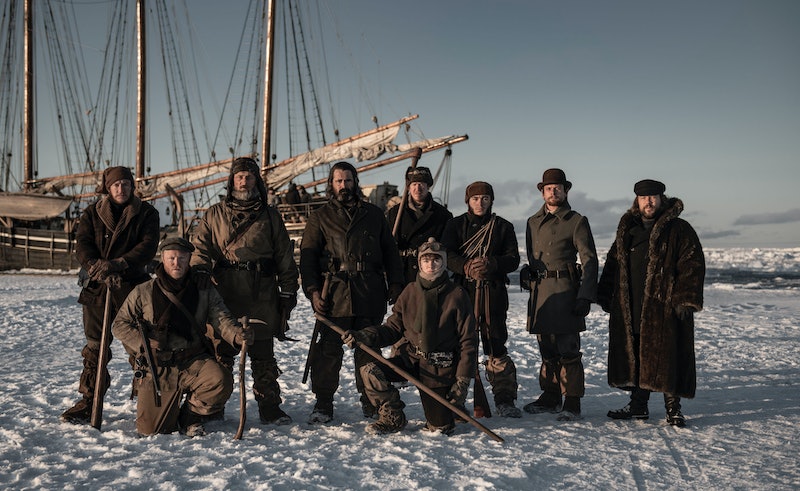 Adapted from Ian McGuire’s acclaimed novel of the same name, new BBC drama The North Water tells the story of a group of men in the late 1850s who are forced to fight for survival amid freezing temperatures after a whaling expedition in the Arctic goes awry. Complete with an all-star cast, the series looks set to become one of the must-watch TV moments of the year. With the BBC having just dropped new pictures of the hotly anticipated drama (some of which you can find below), here’s everything else we know so far about The North Water.

When Does The North Water Air?

It has been confirmed that The North Water will begin airing on Friday, Sept. 10 at 9.30 p.m. on BBC Two.

Production on the drama began in November 2019, with filming taking place on location in the Arctic and Budapest. In March 2020, production was temporarily paused in light of the coronavirus pandemic, and the remaining scenes were later completed in the UK.

The series will consist of three one-hour-long episodes and a 90-minute finale, all of which will also be available on BBC iPlayer.

What’s The Plot Of The North Water?

As mentioned, the series is adapted from Ian McGuire’s novel of the same name. Opening in 1850s Hull, the drama revolves around a disgraced ex-army surgeon, Patrick Sumner, who, while in search of redemption, joins a whaling expedition to the Arctic. Summer is joined on the ship by the harpooner and dangerous killer, Henry Drax — and when the true nature of the voyage becomes clear, the ill-fated journey takes a turn for the worse, and those on board are forced to fight for their lives in the brutal Arctic wasteland.

Who’s In The Cast Of The North Water?

Per Radio Times, the BBC drama’s impressive cast is led by Money Monster and Skins star Jack O’Connell and Fantastic Beasts star Colin Farrell (who looks unrecognisable with long hair, an unkempt beard, and scars on his face). They will portray the central characters of Patrick Sumner and Henry Dax, respectively.

Reflecting on his time filming the new series with the Radio Times, Farrell discussed how he found his time of set to be “life-changing.”

The actor explained: “It was one of those experiences that sometimes you’re lucky enough to have in film. Where you go through the fire enough with people that you know that if you see them in 20 years, you’ll share the mutual acknowledgement that you went through an experience that was really significant and really profound and really changed you in ways that may reveal themselves through the years.”

He added that “the space, just the vastness of it, the beauty of it and the silence that was up there” had a profound effect on him. “There was just this emptiness and this loneliness to the place that was very beautiful and very honest,” he said. “It wasn’t the kind of loneliness that we can experience in the cities as people, when we’re around people and we feel lonely. This was the loneliness of when you hear people talk about human insignificance in the face of nature and the brutality of nature, the beauty of nature, the vastness of the scope of it – it was very much that every single day.”

In a statement, Boardwalk Empire star Graham shared details of the “incredible experience” of filming on location in the Arctic. “To be so privileged to see such beautiful animals like polar bears in their natural habitat — albeit an ever-changing one, sadly — was truly remarkable,’ the actor commented.

Graham’s co-star Tom Courtenay, who plays ship owner Baxter in the forthcoming drama, also said he is “thrilled” to have worked with the series director Andrew Haigh on “such epic material.”