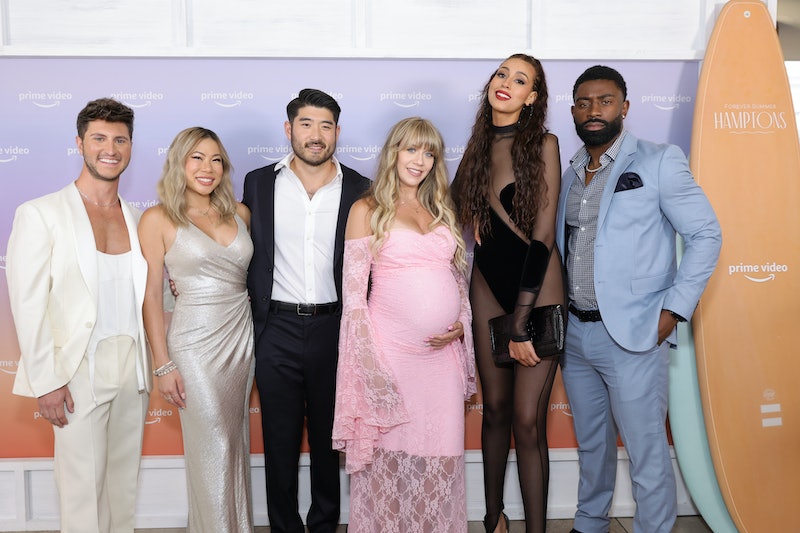 On Prime Video’s “time-traveling, experimental dating series” The One That Got Away, six singles search for their soulmates through various missed connections, whether it be a high school crush, a co-worker, or an ex. One by one, someone from each of the contestant’s pasts enters TOTGA’s world through a mystical “portal,” giving them another chance at finding love together. By the end of Season 1’s ten-episode run, all six singles left the Betty Who-hosted show with a partner — though it appears not all of them are still together.

After leaving TOTGA early in Episode 8, Ashley says she and Quinn Wentzel were still “on a trial” when she stepped in to take care of her ailing grandmother for several weeks until she passed. “There wasn't really any support there from Quinn,” Ashley explains, adding that she expected more from her boyfriend, who she says continued racing and working on his bikes. That’s when Ashley “quickly realized he just wasn't the one” for her. “It allowed me to be able to move on, and gave me closure,” she says. She still has no regrets about her early TOTGA departure. “We really don’t talk anymore, but I don’t have any hard feelings towards Quinn.”

Shortly afterward, the CT scan technologist took a contract in Pittsburgh, Ohio, where she met a “wonderful E.R. nurse who really swept me off my feet.” The pair eventually moved in together and are expecting a baby girl in August 2022. “I’m looking forward to having a little mini-me and being able to hold her,” Ashley shares of the daughter she plans to name Riley. “I already feel so bonded with her.”

Nigel left the show to repair his once-failed romance with real estate business partner Desiree, aka Dezi. Nigel says they spent a lot of time together after TOTGA, talking about everything from their parents, how much they’d grown, and ultimately, what they wanted their future to look like. But unfortunately, they are no longer together. Since then, Nigel shares that he’s “dated multiple people” and currently has “a really special person” in his life. “The One That Got Away really taught me a lot about myself and what I'm looking for when it comes to dating,” the myZorro CEO says, adding that there’s “not much [he] would do differently” on the Prime Video series in hindsight.

Kasey exited through the portal with Simon Fung — and a “no commitment” plan to see where things would go in “the real world.” Kasey says they “definitely tried to make things work out,” but the distance proved to be too much of an issue. (She thought Simon was going to move to California, but “several family obligations” caused him to remain in New York.) “So it didn’t work out, but we’re still on good terms,” Kasey adds. “If we’re visiting each other’s city, we’ll definitely see each other. We’re still cordial.” While she’s dating right now, Kasey, for the first time in her life, has been single for more than six months and is focusing on herself. “I’m just really making sure that I'm a confident person on my own before settling down and committing to someone,” she says.

Echoing those statements in a July 12 Instagram post, Kasey wrote, “If a man wants to grace me with his presence and be a wonderful addition to my life, I will welcome him with open arms. But gone are the days where I believe I need a man to complete my life.”

After having no contact for over 10 years, Vince got engaged to his high school “prom queen” Yurika Yoneda on TOTGA. He says they “were so happy and really excited for the future” after getting engaged. But the transition from the show to real life turned up several issues, including navigating a long-distance relationship — she’s in New York City, while he lives in Los Angeles — and “just emotionally calming down, because everything on the show was so heightened.” In the end, Vince and Yurika decided to split up but remain friends, though he hints that a reconciliation could be in their future. “There is kind of a newfound possibility of a second chance that just recently opened up for us,” Vince teases. “And I'm really considering the possibility of exploring that second chance with her. But as of right now, I'm single.”

Sharing a relationship update with his Instagram followers on July 12, Vince and Yurika elaborated in a lengthy two-part statement that they “recently reconnected” after watching TOTGA and are “going to explore the possibility” of giving their relationship a second chance. “Reliving these memories brought back all of the feelings we once felt before,” they wrote. “Maybe this was just the catalyst that we needed to express to each other what we thought were unrequited emotions.” Though neither of them “know exactly where” things are headed, they are now going to “try to figure things out in real life without the pressure” of a reality TV show.

Before joining TOTGA, Jeff struggled with opening up but soon realized he wanted a relationship and to be in love. While he was scared to “blur the lines” with Alex Van Gurp, his “bestie with benefits” of three years, Jeff finally asked him to be his boyfriend in the finale, and he accepted. Almost a year later, they’re still together. “When we got home, we talked everything out about the experience, and we just realized this is the right next step for both of us,” says the LGBTQ+ travel blogger, who splits his time between NYC and East Hampton. Given the chance to change anything about his TOTGA experience, Jeff “probably would have tried to cry less,” but overall he is happy with how everything turned out.

On July 11, Jeff and Alex revealed their relationship status on Instagram, jointly sharing a photo of themselves holding hands in white briefs on a Malibu beach. “The hardest secret I had to keep,” Jeff captioned the shot, adding a red heart emoji.

While it seemed like Adam Drexler proposed to Allyssa during the TOTGA season finale, Allyssa explains that he gave her a “promise ring,” rather than an engagement ring when he got down on one knee. “It’s been a year now, and we have been going strong!” she tells Bustle, adding that they lived in Houston, Texas, for most of the year. (They were long-distance while Adam played basketball in Indonesia.) Adam is now playing Big 3 basketball, and Allyssa recently walked in her first New York Fashion Week show. After spending the year traveling together and working on their careers, they’re “about to take the next step” and move in together in Los Angeles. “I'm just very grateful for the relationship that we've had and looking forward to every moment that we get to spend together,” Allyssa says.

Sharing their relationship news via Instagram on July 11, Allyssa gushed in the caption, “We’re so excited to finally be able to scream it from the rooftops: true love wins every time!”

This article was originally published on June 27, 2022