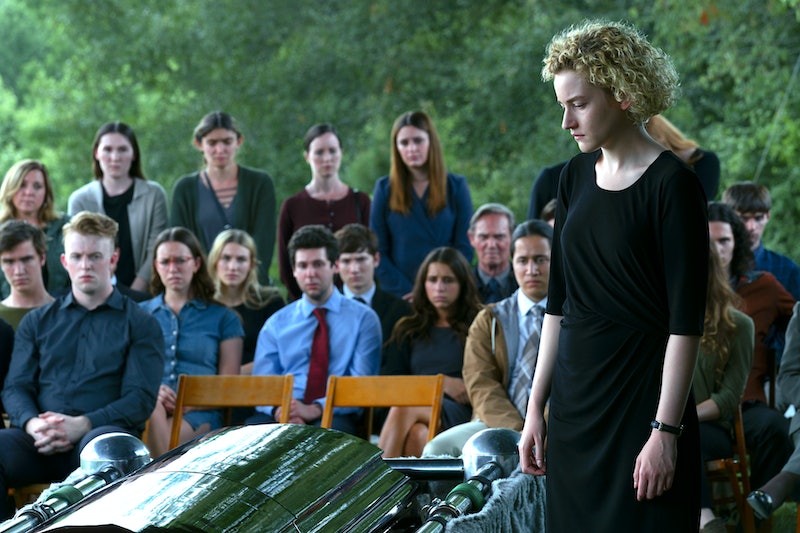 Major spoilers ahead for the Ozark Season 4 series finale. In the Jason Bateman-directed series finale of Ozark, titled “A Hard Way to Go,” every desperate deal, broken promise, and bloody murder converged as the Byrdes made a final bid for freedom from a Mexican drug cartel. Prior to the final showdowns — which included a fan-favorite character’s death — the Byrde family had to reunite.

To start the episode Marty pays a visit to Ruth, threatening to tell Javi’s mother, Camila, that she murdered her son, if she didn’t help him. After he explains that Wendy had checked herself into the same hospital Ben was admitted to and was refusing to leave “until she gets her kids back,” Ruth pays her a visit to “see what was bullsh*t and what wasn’t.” Following their conversation, Ruth agrees to do her part to stop Wendy’s abusive, estranged father Nathan from moving Jonah and Charlotte to North Carolina. “If I keep my end, you’ll tell Marty to call off narco b*tch,” Ruth negotiates. Wendy’s response? “I promise.”

So Ruth grabs a gun from a safe and pays Nathan a visit, and after a few drinks, demands to know why he’s fighting for kids that he doesn’t even want. After Nathan admits it was all to spite Wendy but refuses to leave Jonah and Charlotte behind, she fires a warning shot and demands he tell them the truth or else she’ll shoot him in his “f*cking head” — but not the one atop his shoulders.

Though viewers don’t see what happened in between, the next scene shows Jonah and Charlotte visiting their mother in the hospital. Though they initially warn that their presence doesn’t mean they are staying, after an emotional speech in which Wendy takes responsibility for her own selfishness and anger leading to Ben’s death, they are seemingly convinced to stay. “I want you to stay so much it makes my teeth hurt, but if you want to go, please, go. And I promise you I will love you just as much,” she tells them, insisting that she doesn’t want to “trap” them, as she’d done to Ben.

They’re next seen together getting into a van with Marty after Wendy checks herself out of the facility. As Wendy discusses how she’s going to call moving companies and that they’ll be “free” to move back to Chicago in just 48 hours, the Byrde family has another scrape with death when Marty swerves to avoid a head-on collision and their vehicle rolls several times before coming to a stop upside down. Though Marty, Jonah, and Charlotte were all OK, there’s some initial doubt on Wendy’s status, though she, too, walks away with just bruises.

Once back home, a visit from Father Benitez makes Marty realize that Omar Navarro knows, or at least suspects that Nelson is dead. After confirming with Ruth that he was, indeed, at the bottom of her pool, he offers to connect her with a private investigator that could give her a “brand-new identity” and a clean start. After assuring her that the FBI would be, they also wanted to work with her to continue laundering money out of the Missouri Belle casino. “I like my name,” Ruth insists, agreeing to hear the FBI’s offer.

Believing Camila was responsible for the attempt on his life, Navarro gives Marty the number of a Chicago hitman to call to come “take care of” her. Though Navarro’s prison transfer assassination goes off without a hitch, the Byrdes consider making the call anyway when Camila shows up at their gala and begins questioning Clare about the day her son died. After the incoming cartel boss makes a graphic threat, Clare confesses that Ruth had killed Javi in retaliation for him killing Wyatt. As Marty and Wendy stand with them, Camila warns the couple that she’d have their children killed and warns Ruth she’s coming for her.

Though Wendy struggles to come up with a plan to make good on her promise to protect Ruth, Marty reminds her they have no other path forward — Ruth would have to be sacrificed. When she arrives home from the gala, Camila is waiting for her by the pool, gun in hand. “I’m not sorry,” Ruth defiantly tells Camila after asking how she found out she’d murdered Javi. “Your son was a murdering b*tch. And now I know where he got it from.” After a long pause, Ruth asks, “Well, are you gonna f*cking do this sh*t or what?” Camila fires a bullet into Ruth’s chest, and the screen fades to black.

Meanwhile, Marty and Wendy arrive home from the gala to discover a broken glass door and Mel sitting outside holding the cookie jar that held Ben’s ashes. They offer him money to keep quiet, but Mel refuses their “toxic” money. “You don’t get to win,” Mel tells the Byrdes. “You don’t get to be the Kochs or the Kennedys or whatever f*cking royalty you people think you are. The world doesn’t work like that.”

But apparently it does, as we hear the sound of a gun cock as Jonah appears from inside. “Since when?” Wendy asks, and after the screen fades to black, a gunshot can be heard as Al Green’s “Love and Happiness” begins playing over a blank screen.