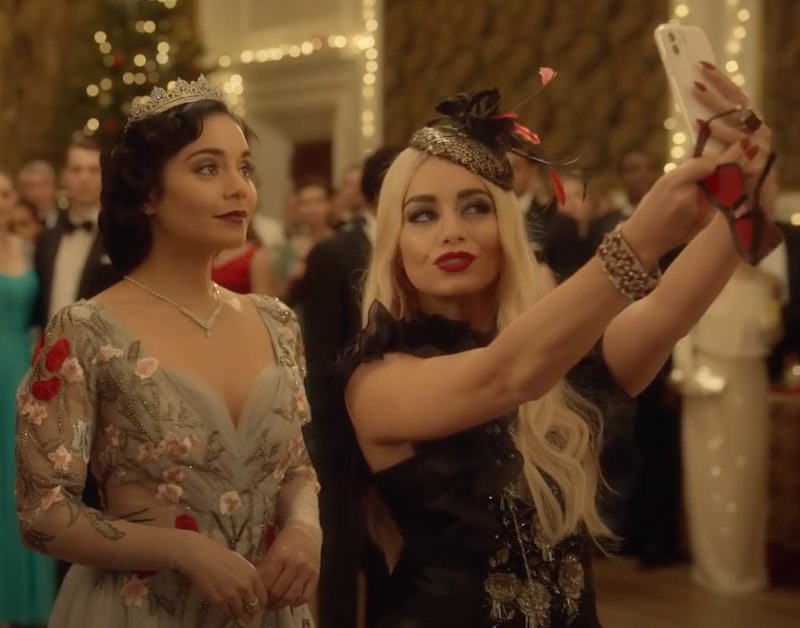 Vanessa Hudgens is the Christmas gift that keeps on giving. The Princess Switch: Switched Again trailer has arrived, and if two Vanessa Hudgens weren't enough for you, you're getting a third. The preview, which Netflix released on Monday, Nov. 9, sees the actor as three different holiday heroes —Or more accurately, two Christmas princesses and one who threatens to ruin the fun for everyone.

In the highly anticipated sequel to the streaming service's 2018 Christmas movie The Princess Switch, Hudgens returns as both Duchess Margaret and baker Stacy De Novo. The two are lookalikes who fatefully met in Belgravia before switching places and falling in love with the other's suitor. Stacy is now the official Princess of Belgravia after marrying Prince Edward, but Margaret's romance with Stacy's friend and baking partner Kevin went downhill after going long-distance for too long.

Before Margaret inherits the throne to Montenaro, Stacy concocts a plan to reconnect the former lovers, which may or may not involve them switching places yet again (spoiler: it does). But not only does Antonio, yet another handsome royal, throw a wrench into things, so does Margaret's party-girl cousin. Enter Hudgens once again as Lady Fiona, who switches places with the Duchess and the Princess (against their will, of course) and tries to steal their crowns. They say that three's a crowd, but for Fiona, this is especially true.

In an interview with Entertainment Weekly, Hudgens admitted that the thought of taking on three characters was daunting, but she still loved the experience. "After I read it I thought, 'Ooh man, this is going to be a lot of work'," she said. "Three of me? Me, myself, and I! I was very excited to create yet another character and had such a blast doing so... I had no idea how much fun it would actually be." However, she did admit that the simultaneous roles came with challenges for both her and her fellow cast and crew. "Figuring out the shot list describing what we were filming was so confusing," she said.

Funny enough, this may not be the last Hudgens that shows up in Belgravia. EW confirmed that a third Princess Switch film is already in the works and due to begin shooting later this year, with a release date currently scheduled for 2021. With any luck, Hudgens might be creating yet another royal character... or more. But for now, The Princess Switch: Switched Again will stream on Netflix on Thursday, Nov. 19, making it the perfect start to your holiday movie watchlist.

More like this
Here’s Everything Coming To & Leaving Netflix In February
By Jake Viswanath
Vanessa Hudgens Is Reportedly Engaged To Cole Tucker
By Jake Viswanath
Austin Butler Confirms Vanessa Hudgens Pushed Him To Do 'Elvis'
By Alyssa Lapid
Stephen Graham & Steve McQueen Are Working On A Wartime Drama
By Darshita Goyal
Get Even More From Bustle — Sign Up For The Newsletter
From hair trends to relationship advice, our daily newsletter has everything you need to sound like a person who’s on TikTok, even if you aren’t.