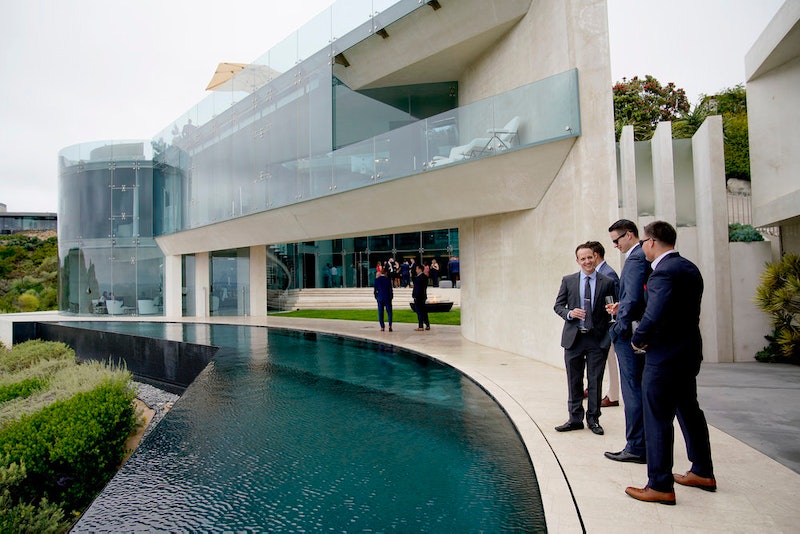 In the Season 12 premiere of Million Dollar Listing Los Angeles, real estate agents Josh Altman and Josh Flagg were tasked with selling a $30 million mansion nicknamed "The Razor House." It's unclear if it will be documented this season, but the property has since been purchased by a celeb couple: Alicia Keys and her husband, Swizz Beatz, bought the Razor House for $20.8 million in 2019, according to Page Six.

The breathtaking La Jolla property was designed by Wallace E. Cunningham in 2007. It consists of four bedrooms (in addition to a two-bedroom guest house), a living room overlooking the Pacific Ocean, and a vanishing pool. In an Instagram video posted in late August, Altman announced that they'd sold the house with the help of Stephen Sweeney, adding that it was the "most expensive sale this year in La Jolla."

The Razor House's previous owner, Donald Burns, purchased the property in 2011 for around $14.1 million, according to Architectural Digest. But Keys and Beatz were happy to shell out more. Beatz told AD in a separate interview that he'd "had the house on [his] phone as a screensaver for eight years," and that he considered it more of a sculpture than a traditional house.

He and Keys didn't even think buying the house would be a possibility until it suddenly appeared on the market. "We had to act fast," Beatz told AD. "We packed up two weeks of clothes and moved because we had to put the kids in school. It was that fast of a decision. When you come in touch with a masterpiece, you have to [act]."

He added that the house "just spoke to" him. "The view, the air, the beach, the mountain, the sunset. It made the sculpture so much more beautiful to us. It’s a complete package."

In fact, the couple admire the house so much that despite being big art collectors, they barely wanted to decorate the walls. "Every room [in The Razor House] is an art piece," Beatz told AD. "Even the art that we put in the house is very minimal. I don’t even want to put anything on the walls. Drilling into the walls is like drilling into my heart. It was killing me."

The futuristic mansion has been the perfect backdrop for the family's quarantine photoshoots — one of which Keys recently did for InStyle. If you have to be stuck inside during a global pandemic, the Razor House is a pretty great place to get trapped.

More like this
Is The Insta-Famous Always Pan Actually Worth It?
By Jessica Goodman
The Cabincore Home Decor Trend, Explained
By Jessica Goodman
The Guide To “Witches Stairs” & Why They’re Actually Great For Small Spaces
By Emma Garza
Kanye Joked About His Divorce To Kim K In A Surprise Speech At The BET Awards
By Alyssa Lapid
Get Even More From Bustle — Sign Up For The Newsletter