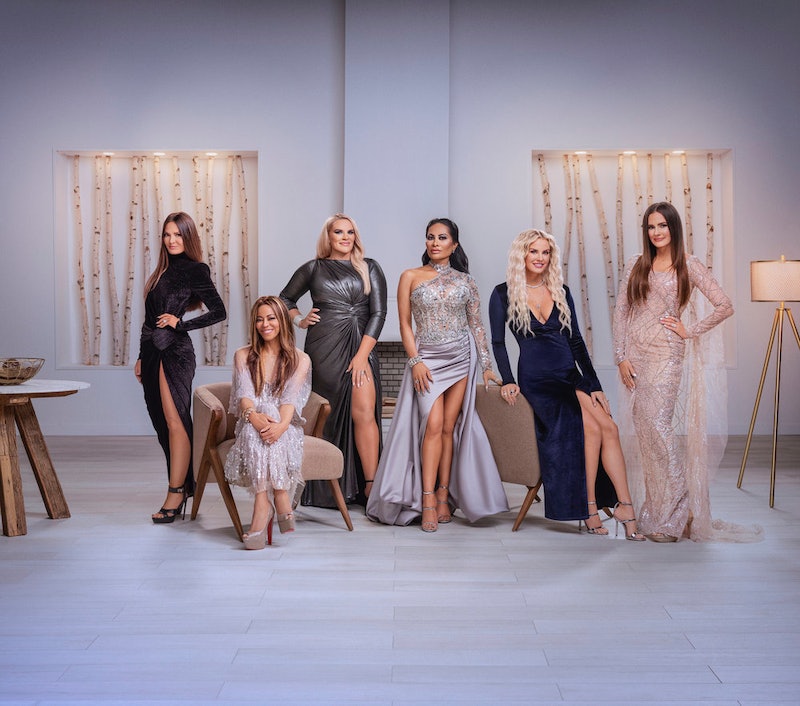 The Real Housewives franchise is setting up shop in Salt Lake City, Utah, where, according to the new cast, religion rules all and perfection is expected — but of course, these new housewives are anything but perfect. The first trailer for The Real Housewives of Salt Lake City is full of wild moments, from breaking the rules of Mormonism to accusations of infidelity, racism, and instances of very tangled family drama. And that's not even including all of the usual fights and petty shade.

The newest additions to the Housewife pantheon include Lisa Barlow, Mary Cosby, Heather Gay, Meredith Marks, Whitney Rose, and Jen Shah. And, based on the trailer, their relationship with the Mormon religion is going to loom large over the season. According to their official bios on Bravo.com, Heather and Whitney have left the Mormon church, Lisa chooses to classify herself as "Mormon 2.0," and Jen is converting from Mormonism to Islam. And though the trailer teases that Mormonism requires perfection, it's obvious these women have more going on underneath the surface, leading to some arguments, accusations, and declarations that will make your jaw drop. And isn't that exactly what we want from our Housewives?

The trailer begins with each Housewife giving their own plea to God — "Are you there? Are you listening?" — before it cuts to Jen declaring that she would drown someone "in the lake behind my house if she wasn't your friend." And that's just the first ungodly moment of the trailer.

Elsewhere in the clip, Heather accuses Meredith of being unfaithful to her husband of 25 years, while Jen angrily asks another woman, "You're gonna go with Mary, who f*cked her grandfather?" For context: Mary did marry her grandmother's second husband in order to inherit her family's empire of Pentecostal churches and become a First Lady. Religion truly trumps all in Salt Lake City.

Salt Lake City is the tenth city to receive its own Real Housewives show (at least in the U.S.), and according to Housewives honcho Andy Cohen, it's a real "curveball" within the franchise, as he wrote on Twitter. Cohen also gushed about the show at BravoCon in November 2019, and acknowledged that it was a locale that fans may not have expected to see. "In Utah, you've got the majesty of the mountains, you've got the majesty of the Mormon religion, you've got an exclusive community of people who have very successful businesses, who live in their own universe," he teased. "They hobnob with Hollywood stars who come to Sundance. I think you're gonna be really surprised and intrigued by the group of women we have chosen in Salt Lake City."