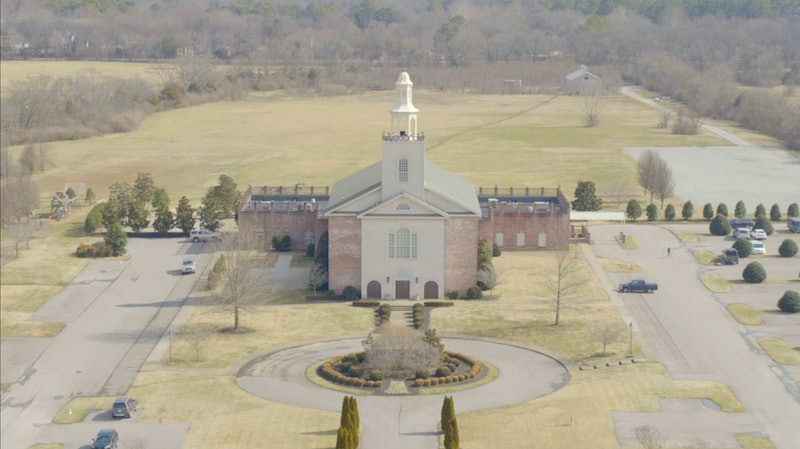 HBO Max’s new docuseries The Way Down: God, Greed and the Cult of Gwen Shamblin explores the life and death of Gwen Shamblin Lara, the creator of a Christianity-based weight loss program and the Remnant Fellowship Church, which has been accused of being an abusive cult. (Shamblin repeatedly refuted these claims).

In 1986, Shamblin Lara (then just Shamblin) combined her training as a dietician and her upbringing in the Church of Christ to create the Weigh Down Workshop, a 12-week seminar consisting of audio and video recordings that she narrated. Her teachings were a contortion of intuitive eating that incorporated scripture: she encouraged workshop attendees to eat only when their body gave them hunger signals, and repeated sentiments such as “every time you want to go to food, run to God.” People were intrigued by the fact that the diet didn’t involve counting calories or restricting foods, and it wasn’t long before the Weigh Down Workshop gained national attention. At one point, it had reportedly spread to “more than 250,000 people in over 1,400 congregations and 70 countries,” according to the docuseries.

Shamblin’s cult of personality started to veer into the territory of an actual cult in 1999, when she decided to break from the Church of Christ in order to found the Remnant Fellowship Church in Brentwood, Tennessee. Although Shamblin claimed that the church was created in part to help those who had gained back the weight they lost using the Weigh Down diet — which she framed as helping to keep them in line with God’s will — many others have claimed it was actually about accumulating wealth and power for herself.

Here’s everything you need to know before watching The Way Down.

What Are the Remnant Fellowship Church’s Beliefs?

The Remnant Fellowship Church came about after Shamblin decided that the Christian church had been corrupted from within and that it was her duty to create a place for “true believers” to practice their faith. The name stemmed from Shamblin’s belief that her congregation was the “true” remnant of the Christian church — essentially declaring all other Christian churches irrelevant. Prior to the creation of the Remnant Fellowship Church, a number of churches from other Christian sects had tacitly supported Shamblin by hosting Weigh Down workshops within their congregations. But the tide of that support started to shift dramatically once Shamblin publicly rejected the Holy Trinity, a central tenet of Christianity, instead declaring that “God is above all.”

The beliefs of the Remnant Fellowship Church are centered around Shamblin’s controversial diet program, and her belief that the Weigh Down methodology could be applied to solve all of the world’s evils. But former Remnant Church members say that the so-called religious ideology of the church was instead about obeying Shamblin’s authority, which she claimed she received from God, and getting (and staying) thin. In fact, Shamblin pushed the belief that being able to lose and keep off weight quickly was a reflection of being more holy or closer to God.

Former congregates and family members of those in the church claim that the church is a physically and mentally abusive cult that dictates every part of its members’ personal and professional lives. They say they were encouraged to fast and starve themselves in order to lose weight, were told to stop taking necessary medications, and could not leave the church without facing retaliation. Others say that people who were unable to lose significant amounts of weight were shunned by the church community.

What Happened in the Remnant Fellowship Plane Crash?

On Saturday, May 29, 2021, Shamblin and her husband Joe Lara along with five other Remnant Fellowship Church leaders were presumed dead after the Cessna jet plane they were on crashed into a lake near Nashville. The plane took off in the morning from Smyrna, Tennessee, and reportedly went down moments later. Investigators suspect that the accident was due at least in part to a mechanical failure in the aircraft after a recording of the communication between the control tower and the plane revealed an alarm going off in the cockpit soon before the crash.

Way Down director Marina Zenovich was putting the final touches on the show when the plane crash happened. Not only did this development complicate the custody case between Shamblin’s husband Joe Lara and his ex-wife discussed in the series, it also prompted even more people formerly affiliated with Remnant Fellowship Church to come forward with their stories about Shamblin and the church. This led HBO Max to alter their original plan, splitting The Way Down into two parts, the second part of which will incorporate the new developments following the plane crash and will reportedly premiere in early 2022.

Who is the Leader of the Remnant Fellowship Church Now?

Currently, the remnant fellowship church is being led by one of the few members of Remnant Fellowship Church leadership who was not on the flight that crashed — Shamblin’s daughter, Elizabeth Shamblin Hannah. Her husband, Brandon Hannah, was one of the casualties in the same plane crash that took her mother’s life.

Shamblin Hannah sent a text message out to Remnant Church members on the day of the plane crash, saying that she and her brother had “ just gotten word that Gwen and Joe Lara’s plane had to go down for a controlled, quick landing.” She added, “more information to come, but be in prayer — and be at peace. GOD IS IN CONTROL, and we will not stop moving forward with WHAT GOD WANTS with this church.”