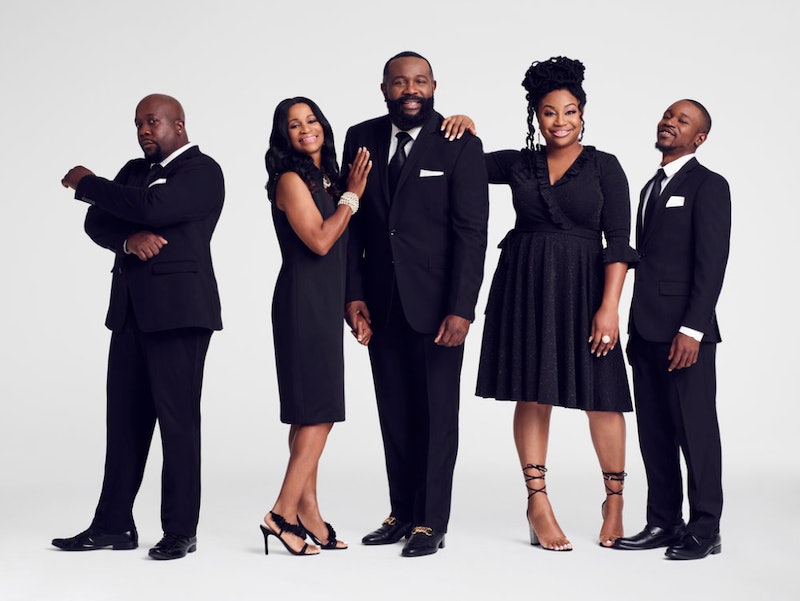 Pastor Richard Hartley is far from your typical pastor — unless your pastor has also performed with Mariah Carey. The father of two, who stars in USA's The Rev along with his family, started singing at 4 years old in the choir of his family's church, the Bethlehem Church of God in Christ in Far Rockaway, New York. His got his first big break when he was cast in the off-Broadway musical, Mama, I Want to Sing!, later becoming the production's choir director.

In the several decades since then, Hartley has had a prolific career as a singer and musical director, traveling across the world to work with choirs and musical icons such as Aretha Franklin, Celine Dion, and Diana Ross. Now, he's retired and back at home in his own church, both to lead them in worship and to get their choir into shape.

Here's everything to know about the new reality star.

Hartley's Church Is A Family Affair

Hartley is the pastor at Haven International Ministries in Far Rockaway, Queens, a church that he co-founded 14 years ago. Hartley's entire family is actively involved in the church, with his daughter leading worship and youth ministry, his son serving as a member of the church's band, and his wife as the church's first lady.

Reverend Hartley's wife, Stacey Hartley, works as a nurse and is also the first lady of Haven International Ministries. She and the Rev have been together since they were high school sweethearts, and while he's been traveling the world, she's been largely responsible for holding down the congregation in Queens.

Hartley's Kids Followed In His Footsteps

Judea Hartley, Hartley's 27-year-old daughter, got her father's sense of humor and his musical abilities. Currently, she lives at home with her parents and works as the praise and worship leader of the church as well as head of the youth ministry. Judea jokes about "collecting" degrees — she currently has two Master's degrees, one in journalism and the other in public relations — and recently applied to doctorate programs.

The Rev's son, Jordan Hartley, recently decided to take some time off from work and moved back home with his parents. The 28-year-old aspiring musician "doesn’t stop practicing till four o’clock in the morning" and is currently a drummer in the church's band.

More like this
Are Richard & Vika From 'Bling Empire: New York' Still Together?
By Karen Fratti
Here's Everyone Who Will Be Competing In 'Survivor' Season 44
By Brad Witter
Zach Addressed His "Boring Bachelor Energy" After His Group Date With Latto
By Grace Wehniainen
Everything To Know About 'RHONY' Season 14
By Jake Viswanath, Alyssa Lapid and Brad Witter
Get Even More From Bustle — Sign Up For The Newsletter
From hair trends to relationship advice, our daily newsletter has everything you need to sound like a person who’s on TikTok, even if you aren’t.