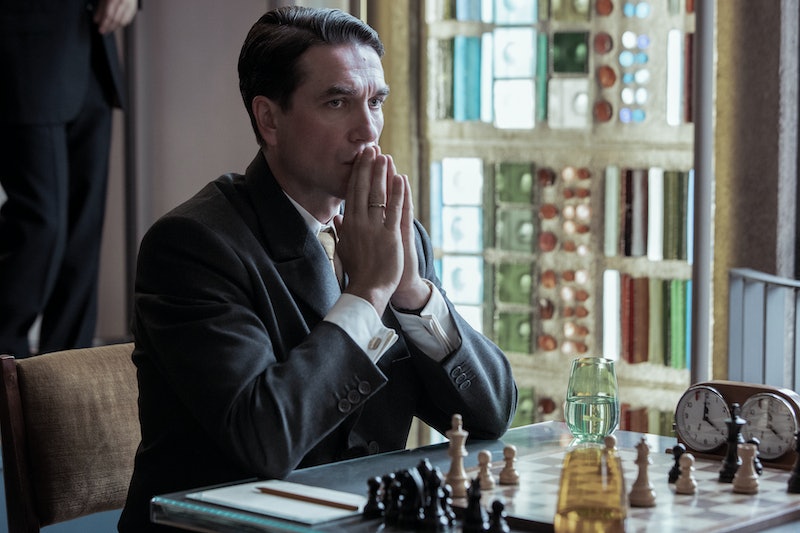 Among the many opponents chess prodigy Beth Harmon (Anya Taylor-Joy) faces in Netflix's The Queen's Gambit, the most formidable is inarguably The Russian. A Soviet grandmaster played by Marcin Dorocinski, he's one of the few players she's unable to easily beat. It doesn't appear that Beth or The Russian are based on real people, as the show itself is adapted from Walter Tevis' 1983 novel of the same name. But the two's dynamic certainly bears a resemblance to one of the most infamous rivalries in professional chess history.

As some critics have already pointed out, Beth is fairly similar to chess legend Bobby Fischer. Fischer rose to fame in the mid-20th century as a young chess prodigy, bringing unheard of attention to the sport. Some also speculated that he lived with mental illness, and his fame peaked when he defeated Russian world champion Boris Spassky during the Cold War in a highly-publicized 1972 match. Beth is comparable to Bobby in all of these aspects, right down to her world champion Soviet rival, Vasily Borgov. Though Borgov is a fictional character, it seems likely that he was at least influenced by Spassky. They were both older and arguably more accomplished than their rivals, and both lived in the Soviet Union during a time when the Iron Curtain was its most opaque.

Tevis has also said directly that Fischer and Spassky influenced his novel. "The superb chess of Grandmasters Robert Fischer, Boris Spassky, and Anatoly Karpov has been a source of delight to players like myself for years," he wrote in the book's Author's Note. "Since The Queen's Gambit is a work of fiction, however, it seemed prudent to omit them from the cast of characters, if only to prevent contradiction of the record." In other words, Spassky and Fischer aren't in the story, but they were certainly top-of-mind for Tevis while he was writing it.