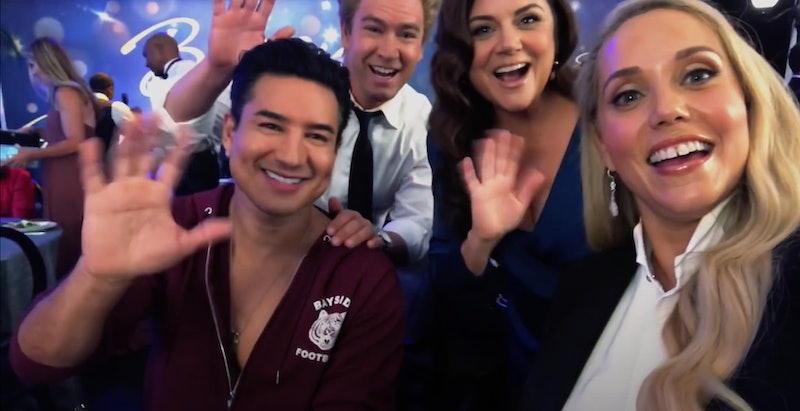 Most students might be stuck learning at home this semester, but at Bayside High, class is back in session after nearly two decades. The first Saved by the Bell reboot trailer finally arrived on Tuesday, Oct. 27, and while fans of the '90s sitcom will surely lap up the returns of Mario Lopez, Elizabeth Berkley, Tiffani Thiessen, and Mark-Paul Gosselaar, the reboot might also make a new generation of kids actually miss going to school.

In the new Peacock series, California governor Zack Morris (Gosselaar) and his high school sweetheart-turned-First Lady Kelly Kapowski-Morris (Thiessen) receive major criticism for shutting down many underfunded high schools. This, of course, prompts Morris to send students to the most well-funded institution he knows: Bayside High. With the help of Jessie Spano (Berkley) and A.C. Slater (Lopez), who are now faculty at the school, a new wave of young, diverse kids transform Bayside High, giving the privileged students a huge reality check.

The new trailer shows our favorite characters onscreen once again, reuniting with a spirited rendition of the Zack Attack classic "Friends Forever." But on the reboot, fans of the original series will get to know their children. Belmont Cameli portrays Jamie, Jessie's sensitive son who just happens to be captain of the Bayside football team, while Mitchell Hoog plays Mac Morris, who is basically Zack's mini-me. Dexter Darden, Alycia Pascual-Peña, Josie Totah, and Haskiri Velazquez round out the cast of new generation of students.

In a July interview with Variety, Gosselaar praised the reboot, saying the writers and showrunner Tracey Wigfield made a series that "stayed true" to the beloved characters while moving them into the future and not focusing on their high school messes — at least not too much. "I feel like the character that I'm playing is not the same Zack Morris but a heightened version of him," he said. "I think what you can see from the trailer [is] that the characters are larger than life. They’re a little more animated than we were back in the '80s and '90s. And I think it's a fun version."

The Saved By the Bell reboot premieres on Peacock on Wednesday, Nov. 25.