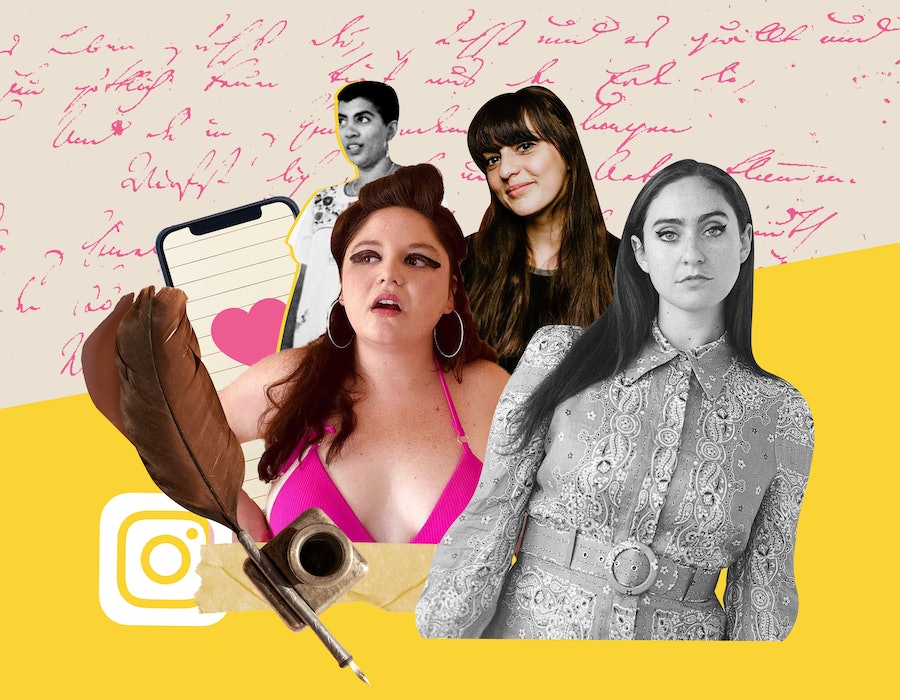 Comedian Arti Gollapudi was in the throes of a painful breakup when she decided to compile a list of everyone she’d ever kissed or slept with. The aim was to remind herself what it felt like to hook up with someone other than her ex, but her ledger of past lovers soon became something much greater. “[The list] emerged into a short little poem. From there I printed it and I would sell it at different comedy shows, and other women, specifically women of color, really liked it,” she tells Bustle. Gollapudi, who in addition to her comedy work is a trained jazz singer and actor, quickly realized she’d tapped into yet another compelling outlet for self-expression. “I started feeling like, ‘Oh, maybe the writing I do in private is as funny for other people as it is for me.’” Now, Gollapudi is the author of the collection Boys I’ve Kissed & Hated — but the place that she most frequently publishes her poetry is Instagram.

Gollapudi is one of the many young, female, multi-hyphenate comedians embracing the title of “Insta poet.” It’s a genre of poetry that rose to prominence in 2016, around the time Rupi Kaur’s seminal milk and honey sold more than 3.5 million copies, unseating the former bestselling poetry book of all-time: Homer’s The Odyssey. Kaur’s generation also includes acolytes like Goodreads Poetry award winner Lang Leav, and Cleo Wade, whose work has been spotlighted on billboards in Los Angeles and Times Square. Unlike the traditionally stuffy poetry many of us read in school, these authors developed a point of view that was beautiful, affirmational, and unabashedly feminine, combining romantic reflections on womanhood with shareable mantras for self-improvement.

While this next wave of Insta poets certainly hopes to mirror the success of their foremothers, their take on the genre meets readers somewhere different: where they really are — even if that’s spiraling on their bathroom floor — rather than where they hope to be. Often written on the notes app or using similarly lo-fi devices, these poems don’t come steeped in self-care or offer any grand solutions for your malaise. Instead, they are remarkably unfiltered, reveling in the murkiness of sex, anxiety, and body image, bringing light to the gloriously unglamorous facets of the female experience.

When Gollapudi first started sharing her poetry on Instagram, it was as satire in response to the Kaurs and Wades of the world. (She cites her poem that reads, “As you look at your bass guitar, longing to f*ck it, you settled for me,” as the perfect example of her early attempts at humorous homage.) “I was like, ‘Oh, look, they’re doing this really serious, nice, beautiful thing.’ My form of comedy is to do the opposite [of the mainstream], using the same format,” she says. “I felt too sh*tty to be so soft and sentimental all the time [like them]. But eventually it became something so much more [than satire].”

Comedian Catherine Cohen, whose collection God I Feel Modern Tonight was just released by the famously high-brow publishing house Knopf, has also struggled with allowing her poems to be more than punchlines. One of the first she ever shared on Instagram was a rumination on her yeast infection. “Starting out I was like, ‘If I end this poem with a joke, it won’t be embarrassing to share this, since I do comedy,’” she says. “Doing this book gave me permission to not feel like every line had to be a joke. It could just be a poem for the sake of being a poem.” Cohen also writes a weekly poetry newsletter, titled My Sexy Little Email, and though her recent works still offer comedic references to things like the water bottles on Love Island and murder podcasts, they make art out of the anecdotal over the aspirational.

Despite all the satirical impulses, the latest form of Insta poetry is more than a new “bit,” and the common thread that unites these new voices is a bracing vulnerability. Meg Stalter, who’s known for her viral character videos, had long been looking for an outlet to be more earnest on the internet. “Through the pandemic, people have been more open to being vulnerable online, and it’s been fun to be like, ‘Hey, this is a serious thing that I want to share,’” she says of her poetry. “Even though there’s nothing I love more than telling a joke, it’s been really fun to be like, ‘I’m allowed to be earnest, too.’”

For Millennially Challenged host Aly Dixon, poetry’s given her the opportunity to write through the trauma she’s experienced from caring for her sick parents during the pandemic. Her work explores everything from her mother’s love of Pandora charms to getting naked to weigh herself. “I’m sort of bad at being open and vulnerable, so comedy was really good for me because I could go on stage and make jokes about [my parents] and deflect a little bit,” she says. “But with not having that outlet during the pandemic, I’ve had to figure out different ways to deal with sh*t. Honestly, I’ve needed to be more vulnerable in general and poetry has helped. It’s been really beneficial from a mental health standpoint.”

But just because these comedians have learned to embrace their inner earnestness doesn’t mean it always translates to their fans. Stalter, who’s shared front-facing videos of herself playing everything from “girl at the party who shouldn’t be giving a speech but is” to “girl in movie who tries to get the guy she’s with to dance,” has followers who assume her poems are yet another one of her bits. “I’ve gotten a few comments like, ‘Wait, I can’t tell if you’re making fun of Lana Del Rey,’” she recalls. So Stalter’s become mindful of how she presents her work in order to show she’s not “doing a parody of a poem.” Before publishing a recent poem that took the form of a love letter to herself she “took a screenshot of it in the Google Doc, then put it through a color filter because I really wanted everyone to know that it was real.” She’ll also typically issue some sort of disclaimer saying, “This is earnest, so if you guys make fun of it I’m going to delete your comment.” (For the record, her followers by and large obey.)

A list of people you’ve slept with might not be what your high school teacher told you is poetry, but it comes from the same impulse the Great Poets had when putting their quill to paper: namely, to tell the truth, though despite some human universals, their truth can feel very different to ours. “I’m not going to read Walt Whitman. That’s not accessible to me emotionally, but I think right now is a moment where I think maybe we, as the younger generation, are deciding what poetry we like. And I think Instagram has become sort of the mining field for it,” says Dixon. What particularly excites her is the opportunity to reimagine what female Insta poets are supposed to sound like. “Girls can write gross poems! Right now [I’m working on one] that’s literally about me drinking bloody marys and talking about it in regards to periods. Women aren’t always writing poems about a long-lost love.”

More like this
10 New Must-Read Books Out This Week
By K.W. Colyard
'Firefly Lane' Season 2 Will Be The Show's Last — But There's A Twist
By K.W. Colyard and Grace Wehniainen
In Elizabeth Strout’s Novels, The World Changes But People Stay The Same
By Morgan Leigh Davies
Rhaenyra's Sons May Not Last Much Longer On 'House Of The Dragon'
By Grace Wehniainen
Get Even More From Bustle — Sign Up For The Newsletter