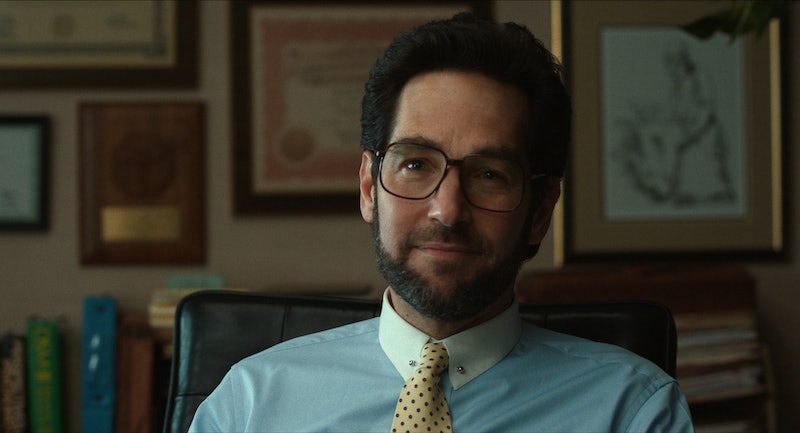 The Shrink Next Door tells the true story of a relationship between a therapist and patient gone terrifyingly wrong. Adapted from the 2019 podcast of the same name, the Apple TV+ series stars Paul Rudd as Isaac “Dr. Ike” Herschkopf and Will Ferrell as his patient Martin “Marty” Markowitz. Though Herschkopf has claimed that Markowitz was a willing partner in everything that happened between them, Markowitz alleges the doctor gradually exerted control over his life throughout the course of three decades.

Markowitz — a wealthy, Ivy League-educated businessman — met Herschkopf in 1981 while struggling with the recent death of both of his parents and a broken engagement. At the suggestion of his rabbi, he sought treatment from Herschkopf, a famous psychiatrist who claimed to count Gwyneth Paltrow and Courtney Love among his clients. Initially, Markowitz felt the therapy was helping. But it didn’t take long for the doctor to begin crossing boundaries. Markowitz says Herschkop began by cutting him off from his sister Phyllis Shapiro, convincing him to edge to her out of the family’s textile business, Associated Fabrics. Eventually, Markowitz says Herschkopf alienated him from his entire family. It would be almost 30 years before he reconnected with his sister.

Over the next three decades, Herschkopf continued to insert himself into all areas of Markowitz’s life. Not only did he get involved with Associated Fabrics’ business — at one point serving as the company’s president — he got himself listed as a cosigner on Markowitz’s $2.5 million bank account and convinced him to open a charitable foundation and list himself and his wife as the beneficiaries. He also had his wife listed in Markowitz’s will.

In 1986, Herschkopf convinced Markowitz to buy the Southampton property adjacent to the Hamptons summer home he already owned. Herschkopf then moved in and began to present the house as his own, hosting extravagant parties for celebrities and wealthy clients. He even went as far as to put his name and title on the mailbox — with a fake surname, of course. All the while, Markowitz lived in the guest quarters, often serving drinks and grilled meat at Herschkopf’s parties. Many guests assumed he was hired help rather than the actual owner of the house.

Markowitz finally broke off his relationship with Herschkopf in 2010, after he underwent a hernia surgery and the man who claimed to have been his friend for three decades didn’t visit or even check on him. Two years later, Markowitz filed his first complaint about Herschkopf with the New York State Department of Health, but it took seven years before the department began examining his allegations.

In April 2021, Herschkopf was ordered to surrender his license to practice psychiatry in New York after a five-member hearing committee convened by the New York State Department of Health found him guilty of 16 incidents of professional misconduct — including gross negligence, exercising due influence, and moral unfitness. According to the committee, Herschkopf violated “minimal acceptable standards of care in the psychotherapeutic relationship.” (In a phone interview with The New York Times, Herschkopf said he planned to appeal the ruling.)

“I’m elated,” Markowitz said of the decision. “It is complete justification for all the agony and angst I went through these past 10 years. And the fact that they agreed with every single one of these allegations and accepted none of his makes it that much sweeter.”