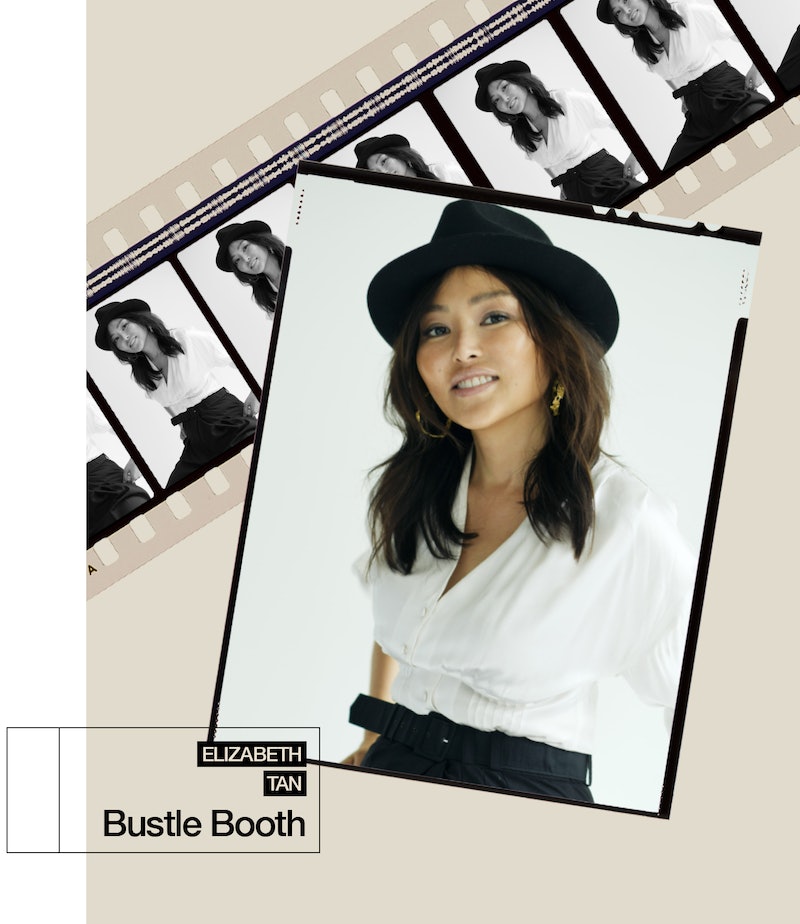 When celebrities (virtually) hang out with Bustle writers, we want to give them the chance to leave their mark. Literally. So we hand them a pen, a piece of paper, a few questions, and ask them to get creative. This time, The Singapore Grip actor Elizabeth Tan is leaving her mark in the Bustle Booth.

“Actors are storytellers and, growing up, I wrote so many fantasy stories," Elizabeth Tan tells me when I ask about her journey into television. "I’d write them down on paper and staple them together like books. I must have been six and my mum said she’d get them published, but you can imagine what they were like,” she laughs.

While the London-based actor sadly didn’t go on to have her stories published, it hasn’t stopped her playing the lead in other people’s. But besides a brief appearance in Doctor Who, fantasy hasn't really been her area. Her most significant roles to date have been in shows such as Top Boy, Waterloo Road, and The Syndicate, all of which ground themselves firmly in reality.

Tan's latest role sees her placed in the middle of a real-life historical event: 1942's Battle of Singapore. She plays Vera Chang in ITV's The Singapore Grip, an adaptation of J. G. Farrell's 1978 novel of the same name. It focuses on the Blacketts, a wealthy English family who are operating a rubber plant in Singapore when World War II breaks out. Vera, a Chinese migrant with a mysterious past, strikes up a romance with one of the Blackett sons, Matthew.

Speaking about her character, Tan says, “It’s an action lead as well as a romantic heroine so playing her was so much fun. I got to use so many of my skills but learnt so many more too, from speaking Japanese and French to the scenes with martial arts and acrobatics.”

However, although some reviews have been positive, The Singapore Grip has had its fair share of controversy over the past few weeks. BEATS, a non-profit advocacy organisation founded by British East and South East Asian working in theatre and on screen, has called the show a "kick in the teeth." In a statement released on Sept. 7, BEATS said ITV had engaged in harmful stereotypes and made light of a traumatic period of Singaporean history. They also questioned the lack of Asian representation considering the series was based in 1940s Singapore.

In response, Tan says she agrees that East Asian and Southeast Asian people are "still extremely underrepresented in film, television, and media," but that "change is happening" and we are beginning to see more stories from these communities emerge in the mainstream market.

Speaking about The Singapore Grip in particular, she says it's a story that "criticises and mocks colonialism" and "shines a spotlight on the casual racism and exploitation of the locals by the Blackett family, who are depicted as very arrogant, self-serving and greedy – and by no means put on a pedestal." She continues: "Audiences will be repulsed by their behaviour."

Tan disagrees, saying Vera "has her own rich character journey" and "is not dependent on a man." On the contrary, Tan says, "she educates, inspires, and changes the other characters, educates them on the terrible inequalities within the colony and warns them about the persistence of the Japanese."

She adds: "I applaud the fact that this character is here representing the East and South East Asian communities as a strong multidimensional female lead in a British period drama. This in itself is a wonderful step forward for representation."

The Singapore Grip airs Sunday nights on ITV or you can catch up via the Hub.