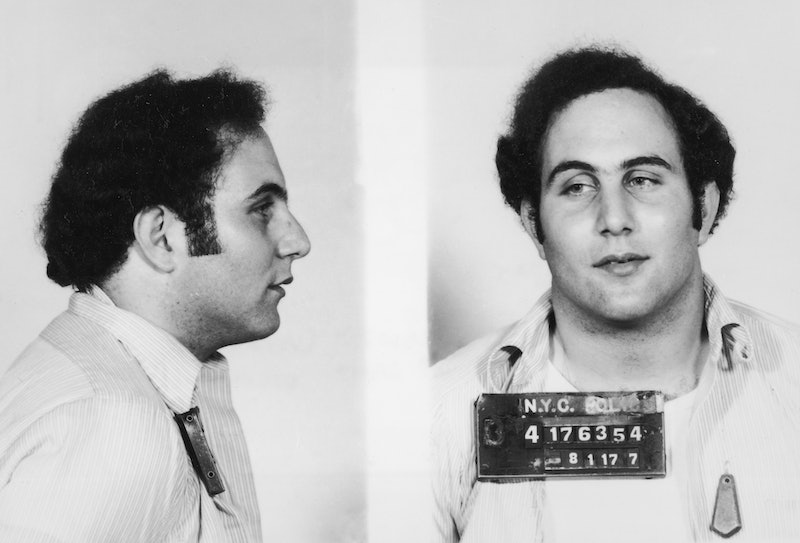 Netflix's new true crime series, The Sons Of Sam: A Descent Into Darkness, dives back into the case of the Son of Sam, who killed six people and injured seven in a series of shootings between 1976 and 1977. The serial killer was eventually caught and revealed to be David Berkowitz, who pled guilty to second-degree murder. He was sentenced to six life sentences for the crimes and has been in prison since 1978.

The terms of Berkowitz’s guilty plea made him eligible for parole after 25 years, in 2002. But being eligible for parole and actually getting it are two very different things. According to Salon, Berkowitz has been consistently denied parole for the last 19 years. His New York state inmate file says he’ll next be eligible in May 2022.

According to Newsweek, Berkowitz converted to Evangelical Christianity in prison after claiming to have found God. In 2016, Salon reported that he believed he was doing better. "I've really done wonderful," he said. "I was constantly putting myself out there to help other individuals, with kindness and compassion. I mean, I feel that’s my life's calling, all these years. My evaluations, and so forth, should show that to be true. I've done a lot of good and positive things, and I thank God for that."

Per Newsweek, Berkowitz asked in 1987 that people refer to him as the "Son of Hope" instead of the Son of Sam, but the name hasn't stuck. It’s actually Berkowitz who deemed himself the “Son of Sam” in the first place: he claimed that his neighbor Sam’s dog was possessed and had driven him to carry out the murders. But FBI agent and criminal profiler John Douglas later claimed that Berkowitz admitted that defense was false when he was interviewed by Douglas and his FBI partner Robert Ressler. As Douglas wrote in his book Mindhunter:

"Early on in the interview, we came to the topic of this three-thousand-year-old dog that made him do it. The psychiatric community had accepted the story as gospel and thought it explained his motivation. But I knew that that story hadn't actually emerged until after his arrest. It was his way out. So when he started spouting about the dog, I said simply, ‘Hey, David, knock off the bullsh*t. The dog had nothing to do with it.’ He laughed and nodded and admitted I was right."

There's always been a lot of controversy surrounding Berkwotiz’s motive. In addition to the dog excuse, Berkowitz claimed that he was connected to a satanic cult that allegedly perpetuated his involvement in the crimes. Per NBC News, there have also been theories from many people, including those in law enforcement, that Berkowitz may not have acted alone. This is the theory that Sons Of Sam explores.

Douglas, for his part, believes that Berkowitz was solely responsible for the crimes. He called Berkowitz an "introverted loner, not capable of being involved in group activity."

In any case, Berkowitz has admitted he at least had some role in the killings. "I was there, at all of them. And in the area, and scouting, and I had a part. I'm responsible for my involvement in those things, and, you know, definitely guilty," he said, according to NBC News.

Unless Berkowitz is ever approved for parole, he’ll continue to serve out his sentence at the maximum security Shawangunk Correctional Facility in Ulster County, New York. He is currently 67 years old.

More like this
Tyler Barriss From ‘Web Of Make Believe’ Remains In Prison For Swatting
By Kadin Burnett
Is Ryan J. Vallee From Web of Make Believe Still In Prison?
By Kadin Burnett
This Netflix Doc Shows How An IRS Scammer Uncovered Secret Spy Technology
By Gretchen Smail
How A Political Staffer’s Death Became The Center Of Alt-Right Conspiracy Theories
By Gretchen Smail
Get Even More From Bustle — Sign Up For The Newsletter