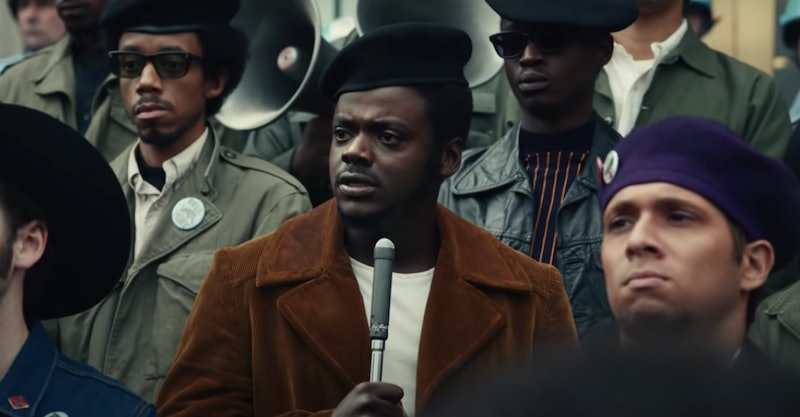 "You can murder a revolutionary but you can't murder a revolution," the powerful words delivered by Fred Hampton, Chairman of the Black Panther Party, are written into history. Now, 50 years after Hampton's death, the story of the betrayal that led to his assassination will be told in the upcoming film Judas & The Black Messiah — the trailer for which just dropped today (August 6).

Academy Award nominee Daniel Kaluuya stars as the American activist in the upcoming film, which was directed by Shaka King and Ryan Coogler and is set to be released in 2021. "I am a revolutionary," chants Kaluuya as Hampton in the ominous and explosive scenes. Expect goosebumps.

The Warner Bros trailer showcases important moments in the freedom fighter's short life, from his passionate speeches to his efforts to provide free breakfast for children. We also see LaKeith Stanfield as William O’Neal, the FBI informant recruited by Roy Mitchell (Jesse Plemons). Facing prison, O’Neal takes a deal to provide information on Hampton and walk free from jail but, as the trailer illustrates, O'Neal wrestles with his betrayal as he infiltrates the Black Panther Party.

Hampton was just 21 when he was shot and killed by police during a raid in 1969. Chillingly, O' Neal had drugged Hampton prior to keep him sedated during the raid.

For Coogler (who also directed Black Panther), Judas & The Black Messiah says much about today as it did the sixties. Speaking at a press conference for the film, Coogler said: "The thing that is so powerful about chairman Fred Hampton is that when he spoke, everything was true, he spoke universal truths that were so sharp it was like a truth that you didn’t recognise, like why did that never dawn on me before?"

The film, which was due to be released this year but set back due to the pandemic, is already commanding Oscar buzz. As one person Tweeted: "Judas & the Black Messiah really looks like the best picture winner."

Judas And The Black Messiah it set to be released in 2021.

More like this
Twitter Is Overjoyed By Angela Bassett’s Record-Making Oscar Nomination
By Maxine Harrison
Stephen Graham & Steve McQueen Are Working On A Wartime Drama
By Darshita Goyal
Channing Tatum “Nearly Killed” Salma Hayek During 'Magic Mike' Lap Dance
By Sam Ramsden
Jemima Khan Used Her Own Life As Inspo For 'What’s Love Got To Do With It?'
By Darshita Goyal
Get The Very Best Of Bustle/UK
Sign up for Bustle UK's twice-weekly newsletter, featuring the latest must-watch TV, moving personal stories, and expert advice on the hottest viral buys.