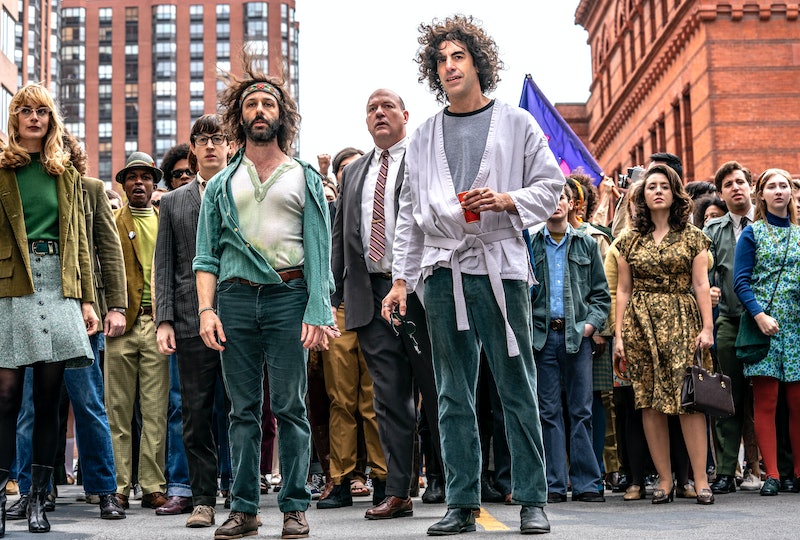 Aaron Sorkin is known for his political dramas. Between The West Wing, The Newsroom, and Charlie Wilson's War — Sorkin's works have come to define our standards for political-centric entertainment. And his latest film, Netflix's The Trial of the Chicago 7, is no exception.

In 1968, the Democratic National Convention was held in Chicago. At the time, the country was ripe with tension — from the Civil Rights Movement to the anti-Vietnam War protests — and people were taking to the streets. The Trial of the Chicago 7 chronicles this time period, honing in one particular protest that grew into a riot and ultimately resulted in a violent clash with police. As Esquire writes of the protest, "The riots themselves started [in August], when several thousand protestors tried to march to the International Amphitheatre, where the Democratic National Congress was being held. The summer of 1968 had been the bloodiest yet in Vietnam; more than 1,000 American soldiers were dying each month."

Sorkin ultimately ended up making the film without Spielberg, and the result is an incredibly prescient portrait of our country's history of protesting. "The script didn’t change to mirror the times, the times changed to mirror the script," Sorkin also shared in the press notes. "Watching the footage every night of protestors clashing with police, it looks exactly like 1968. Even the intramural struggle between the more moderate and more progressive wings of the Democratic Party seem to mirror the friction."

More like this
How To Stream 'White Noise' On Netflix
By Grace Wehniainen
How To Stream Knives Out 2: When Will Glass Onion Be On Netflix?
By Radhika Menon
Here’s Everything Coming To & Leaving Netflix In December
By Jake Viswanath
You Can Finally Stream 'Ticket To Paradise' At Home
By Chloe Foussianes
Get Even More From Bustle — Sign Up For The Newsletter