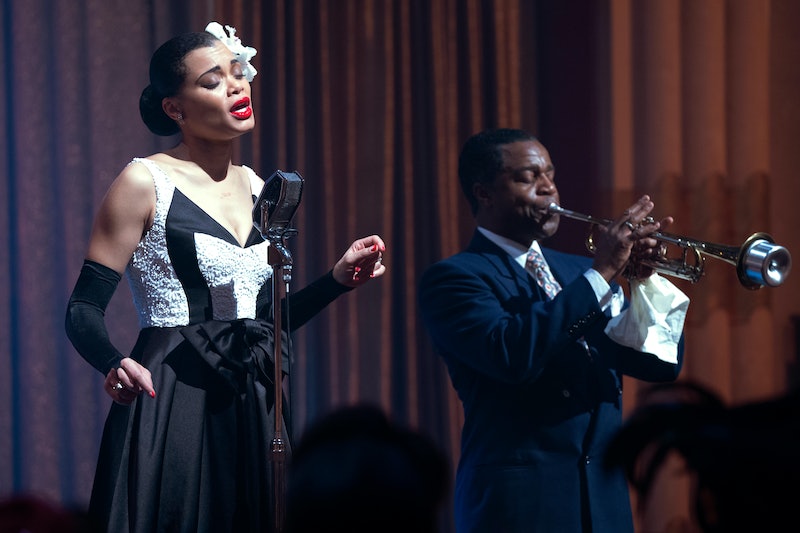 In the new film The United States vs. Billie Holiday, a little-seen segment of the great jazz singer's life is finally given the cinematic treatment. In the film, now streaming on Hulu, singer Andra Day dons the dresses and the vocal vibrato of the late singer. The story explores the roots of Holiday's song "Strange Fruit" and the extensive campaign by the Federal Bureau of Narcotics to stop her from singing the song in public. Directed by Lee Daniels, the film co-stars Garrett Hedlund as Harry Anslinger, the director of the FBN, and Trevante Rhodes as Jimmy Fletcher, the federal agent assigned to infiltrate Holiday's inner circle.

Daniels was inspired to make the film, he says in the press notes, after learning the truth about the 1972 Diana Ross film Lady Sings the Blues. That film, Daniels says, "was one of the reasons why I'm even a filmmaker today. That movie seeped into my soul. I wanted to do what Berry Gordy, Diana Ross, and Billy Dee Williams did. But then I found out that was not the true story of Billie Holiday. It was the story that Black people needed, that the culture needed at the time."

Day adds: "I was obsessed with that movie and Diana Ross's performance, but the movie was done in the early '70s; [J. Edgar] Hoover and Harry J. Anslinger were still in power, [Holiday's abusive husband] Louis McKay was still alive, and the technical director on that film. There was a lot about her life that we weren't allowed to know, and it is so necessary right now for people to truly understand her and to understand their history."

Was Holiday Really Hounded By The Federal Bureau of Narcotics?

Something many may not know about the life of Billie Holiday is that she was hounded by drug czars not for being addicted to heroin, but because the Federal Bureau of Narcotics director Harry Anslinger was on a mission to keep her from singing the song "Strange Fruit."

Daniels' film is based on a chapter called "Black Hands" in British writer Johann Hari's non-fiction book Chasing the Scream: The First and Last Days of the War on Drugs. In a piece for Politico, Hari writes that "Strange Fruit" was, "a musical lament against lynching. It imagined black bodies hanging from trees as a dark fruit native to the South. Here was a black woman, before a mixed audience, grieving for the racist murders in the United States. Immediately after, Billie Holiday received her first threat from the Federal Bureau of Narcotics."

Singing "Strange Fruit," Primetimer writes, "drove Harry Anslinger nuts, and made her personal destruction a goal of his. Declassified FBI files quote an agent inside the narcotics bureau (possibly Anslinger) as saying that 'because of the importance of Holiday, it has been the policy of his bureau to discredit individuals of this caliber using narcotics.'"

Who Was Agent Jimmy Fletcher?

Here's where The United States vs. Billie Holiday takes a little gamble with historical accuracy. While Hari asserts that Fletcher fell in love with her, there isn't much documented about any kind of romantic or sexual relationship between the two of them, at least not to the extent that is shown in the film. As The Guardian writes, "Maybe he had [fallen in love with her]. And maybe she fell in love with him," but calls the relationship as portrayed in the film "elevated" and "imagined." The extensive on and off relationship between Fletcher and Holiday as is shown in the movie is pretty much speculation.

In fact, after Fletcher assisted in getting Holiday arrested and sent to jail for a year, she didn't really see him much after her release, whereas in the film it's after her release where their involvement gets heavy. In reality, Anslinger had assigned a different agent, one who hadn't "gone soft," to hound Holiday, and Fletcher didn't hear from her again until she sent him a signed copy of her 1956 autobiography, according to Politico.

What does the film get right?

Other than the exaggerated love story, The United States vs. Billie Holiday offers up an unpolished look at Holiday's hard upbringing and the trauma she experienced before becoming a huge star. As is depicted in the film, however, that trauma didn't stop once she became famous. Abusive husbands, drug addiction, and the endless hunting of her by federal authorities led to a tragic, early end.