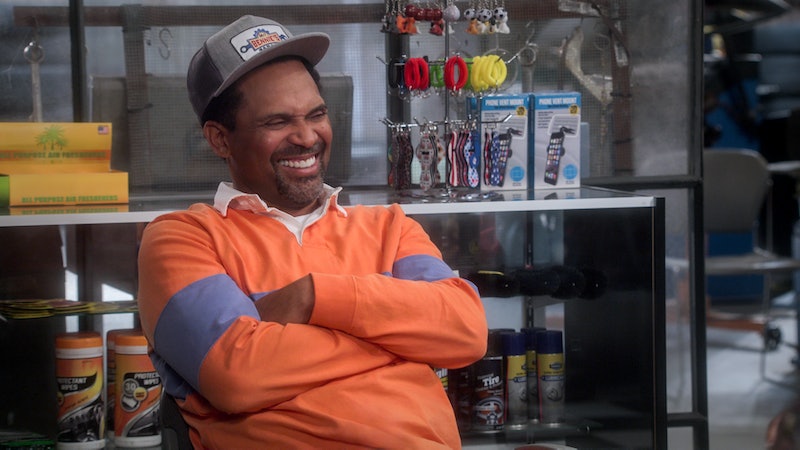 After a year-long wait, Season 2 of The Upshaws is finally back on Netflix on June 29. The new season reunites audiences with their favorite working-class Black family from Indiana. Season 2 opens with only eight episodes — a little light for a half-hour sitcom. Worry not, there are another eight episodes on their way to Netflix, but the streaming service has yet to reveal when the second half of the season will be available.

Though the exact release timeline for Season 2 remains a secret, Netflix dropped some hints about what to expect in Season 2. Mike Epps will be returning as the patriarchal mechanic and series star Bennie Upshaw. The season will continue to chronicle the daily lives, tribulations, and absurdities of the Upshaws as they move through their lives in Indianapolis. Kim Fields (The Facts of Life, Living Single) will be back to play Bennie’s wife Regina, while Gabrielle Dennis (Insecure) will also return as his ex, Tasha.

Despite its two-part season, The Upshaws will likely deliver some more comedy gold in its newest episodes. Here is everything we know about when to expect Part 2 of The Upshaws’ second season.

When Will The Upshaws Season 2 Part 2 Premiere?

First, to clarify, The Upshaws Season 2 will have 16 episodes in total, with Parts 1 and 2 each consisting of eight. According to Netflix, “The premiere date for Part 2 is still top secret.” However, it seems likely that Netflix will want to get the second half of Season 2 on screens before the end of the year. It’d be a fair bet to assume that audiences can expect the second batch of episodes to drop in the fall or winter of 2022.

The streamer also noted that audiences can expect some new romances, old flames, and big ambitions from Season 2. When the series was picked up for Season 2, Netflix’s Head of Comedy Tracey Pakosta voiced her excitement about the show’s future. “Wanda and Regina [Hicks] have created a fresh entry in the tradition of Black sitcoms that’s real, relatable, full of heart and incredibly funny,” she said. “We’re thrilled to see where they, along with their talented cast, take the Upshaws in the second season.”

As for what’s next for the Upshaws beyond Season 2, Netflix has yet to renew the show for more seasons. The Upshaws debuted its first season in May 2021, releasing all episodes at the same time. By June, the series had received its Season 2 renewal. If that pattern repeats itself, fans can expect an announcement about a potential Season 3 roughly one month after Season 2 Part 2 eventually drops on the streaming service.

This post will be updated as more The Upshaws Season 2 Part 2 details become available.

More like this
What's New On Netflix: A Third '365 Days' Movie & Lili Reinhart’s New Film
By Arya Roshanian
What’s New On Netflix: 'Never Have I Ever' & 'Indian Matchmaking' Return
By Arya Roshanian
Does 'Locke & Key’s Ending Mean There Could Be A Season 4?
By Sophia Moore
‘Squid Game’ Creator Hwang Dong-Hyuk Just Dropped A Major Season 2 Tease
By Brian Anthony Hernandez and Bustle Editors
Get Even More From Bustle — Sign Up For The Newsletter