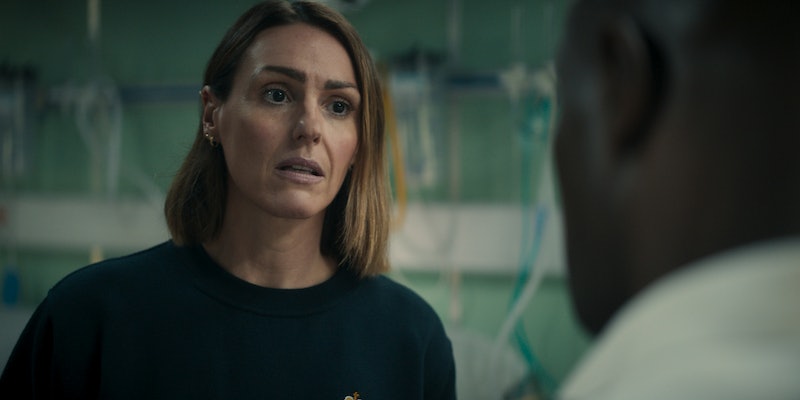 After Suranne Jones almost drowned in a torpedo tube and Russian spy went on a knife-wielding rampage in the lower deck, Season 1 of Vigil reached its explosive finale on Sept. 26. The underwater crime thriller has gripped viewers for six weeks and the finale answered some questions as to why the spy Matthew Doward (played by Lorne MacFadyen) was sent to sabotage HMS Vigil’s mission. It was a cat and mouse game between DCI Silva (played by Jones) and Doward since the beginning but the creators of Vigil have said there was more to the show than meets the eye.

Alongside murder, espionage, and horrendously tense fighting scenes, Vigil was heavy on the details about Navy protocol, police detective work. But it still managed to give viewers an insight into what the characters got up to when they weren’t trying to escape a murderer on a submarine. The show’s creator, Tom Edge explained that this was all intended as a way to give viewers "another way to read the show.”

“I think there are a few different ways that you can enjoy the show; which is about Amy's journey as she goes from being a land-dwelling person, whose life is quite compartmentalised into work and her relationship with the child in her life, and her emotional life over there," He told press including Digital Spy at a recent BAFTA Q&A.

Edge explained that it was important to present DCI Silva as a full character with relationships and a life, rather than simply being a detective in a whodunnit style murder mystery. Alongside trying to establish who the Russian asset was, Silva had an ongoing love storyline with DCI Longacre (played by Rose Leslie.)

Edge said that including the romance humanised the characters and brought the world on board HMS Vigil to life. "Her journey, as she goes into that world, what she experiences juxtaposed with the other half of that relationship, where that person is able to talk to her and she can't talk back, that felt important to tell that story and thread that through the twist and turns of the rest of our show,” he said.