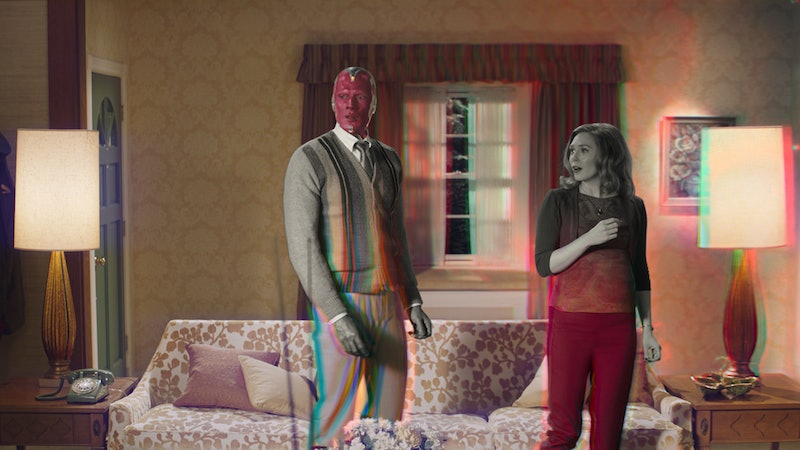 Vision lives... sort of. Disney+ dropped the first trailer for WandaVision during the 2020 Emmys, teasing what the afterlife might look like for Avengers: Infinity War's most permanent casualty. Scarlet Witch and Vision are back, living out the domestic bliss they dreamed of before Thanos and his children arrived to take over Earth, leading to Vision's untimely death and Scarlet Witch's temporary dusting. But Wanda's idea of what a life with Vision would be isn't exactly realistic.

The WandaVision trailer seems to confirm the theory that Wanda has created a kind of dream dimension or reality where Vision is alive and they get to be together. Given Wanda's less than idyllic childhood, she's based their lives on TV shows of the past, like Bewitched and I Love Lucy. However, when her imagined neighbors start questioning their lives, the illusion frays, which hints at something else going on. Could it be that Wanda's powers aren't strong enough to uphold an entire alternate reality? Or could it be that there's something else going on? Maybe this illusion isn't actually Wanda's at all, but the work of something more nefarious.

We also still don't know who Kathryn Hahn is playing, though by the looks of things, she's a regular of this neighborhood. Elsewhere in the trailer, we get a first look at a grown-up Monica Rambeau (played by Teyonah Parris), the daughter of Carol Danvers' BFF, Maria Rambeau. She was introduced to the MCU in Captain Marvel as a young girl. But as fans of the comics know, Monica grows up to become a superhero and even fights alongside Captain Marvel.

According to reports, Monica will be a member of SWORD, a sort of intergalactic version of SHIELD, which might explain why she seems to be thrown out of Wanda's world. WandaVision is expected to premiere in December 2020.