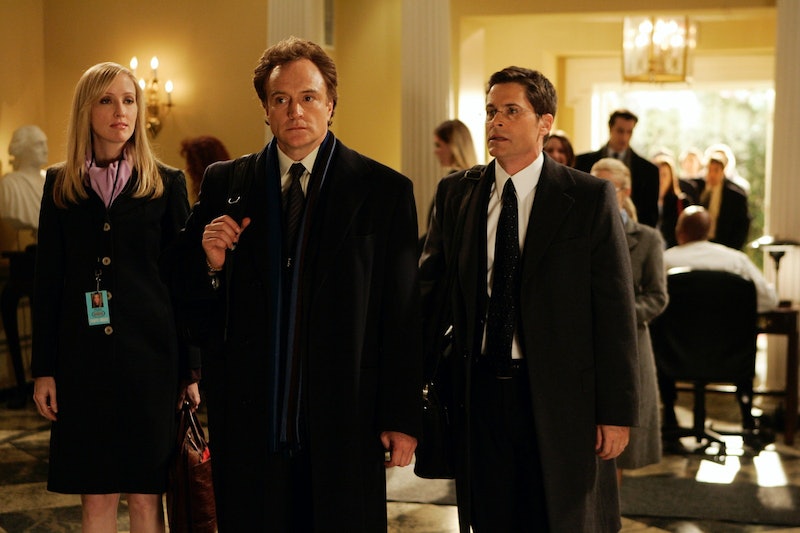 Cue up that soaring theme song — the Bartlett administration is heading back to the Oval Office — the one on your screen, that is. The cast of The West Wing will reunite for an HBO Max special in partnership with Michelle Obama's nonprofit, When We All Vote, which was founded in order to increase voter participation in the 2020 presidential election and all future elections. The special will also feature a guest appearance from the former First Lady herself; WarnerMedia will also make a donation to When We All Vote in honor of the special.

Cast members Rob Lowe, Dulé Hill, Allison Janney, Janel Moloney, Richard Schiff, Bradley Whitford, and Martin Sheen will all reprise their roles for a staged reading of the Season 3 episode "Hartsfield's Landing," which will be filmed in accordance with COVID-19 safety regulations. (It's unclear who will play the role of Chief of Staff Leo McGarry, after John Spencer's 2005 death.) "[Director Tommy Schlamme] and I are incredibly excited to be getting The West Wing cast back together for this staged reading and to support When We All Vote in their efforts to get all of us involved in this election," Sorkin said in a press release obtained by Bustle.

The episode — which originally aired in 2002 — centers around "both literal chess matches and foreign policy showdowns with China focused on the Taiwan Strait," according to Entertainment Weekly. Meanwhile, the Bartlett administration is also waiting on the results of a primary in a small town in New Hampshire, which has historically predicted the winner of the presidential election. All in all, a very timely choice.

Though The West Wing ended over a decade ago in 2006, it is still celebrated and beloved by both fans and the show's cast, who have often spoken about their desire for some kind of reunion. "One of the reasons why The West Wing resonated so much for me on a personal level was — maybe it’s corny — I really believe in all things that are truisms about our country," Lowe, who played speechwriter Sam Seaborn, told EW for their 30th Anniversary issue.

Hill, who played President Bartlett's personal aide, Charlie Young, echoed those comments, and explained that was part of the reason why the cast decided to reunite in order to support When We All Vote. "Our nation is about the citizens who actually roll up their sleeves and get involved, and one of the ways [to do that] that was important on the show and important to us in real life is voting," Hill explained to EW. "I think that has resonated with people over the years. And I'm honored to be a part of this campaign to just inspire people to vote."

While Sorkin noted that the upcoming special is "the first time we’ve done this in 20 years," referring to a full staging, complete with the show's iconic theme song, he has previously stated that he would love to bring back The West Wing in whatever way he possibly could. "If there was a way to bring it back without harming its legacy, I would," Sorkin said during a 2016 interview on the TODAY show. "In a minute," Whitford, who played Deputy Chief of Staff Josh Lyman, added.

"This is gonna sound like corny publicity bullsh*t, but it’s so wonderful to get together with everybody. They’re absolutely like family, I love them all, so, yeah, I would do anything with them," Whitford told Vulture in January 2019 about reuniting with the West Wing cast. "[Making the West Wing was] the equivalent of 11 feature films a year, with complicated dialogue, complicated issues, complicated emotional things. The farther I get away from it, I can’t believe it. I just can’t believe it."

More like this
Man Meets Politics: ‘Boy Meets World’ Star Ben Savage Is Running For Congress
By Jake Viswanath
The OG Power Rangers Are Returning For A Spandex-Clad Special
By El Hunt
'Friends' Star Maggie Wheeler Offers Support To Matthew Perry After Reading His Memoir
By Alyssa Lapid
Anne Hathaway Shared A "Thrilling" 'Princess Diaries 3' Update
By Darshita Goyal
Get Even More From Bustle — Sign Up For The Newsletter
From hair trends to relationship advice, our daily newsletter has everything you need to sound like a person who’s on TikTok, even if you aren’t.