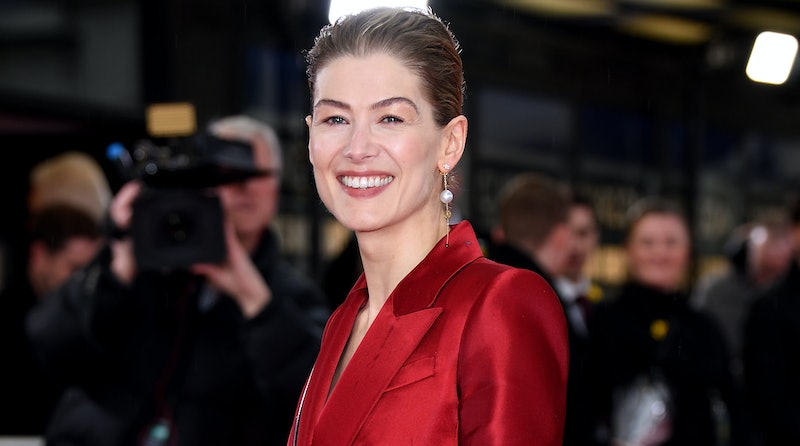 For the first time since it was initially published in 1990, Robert Jordan's A Wheel of Time is finally being adapted to television. Courtesy of Amazon Prime, the fantasy world is being brought to life with a star-studded cast featuring the likes of Rosamund Pike and Sophie Okonedo. So here's everything you need to know about A Wheel of Time, because if you've never come across this magical world you have a lot of catching up to do.

What Is The Wheel Of Time About?

Set in the alternate world of The Westlands, The Wheel of Time takes place between the past and future. The battle good and evil is the main crux of the series, demonstrated in an ongoing battle between the Dragon and the Dark One. As IGN noted, the Dragon is "continuously reborn, age after age" and has the capacity to save the world from the Dark One's force, but there's also the possibility he could destroy it in the process.

While this cycle has gone on since time began, the story in The Wheel of Time takes place in a period where only women of the Aes Sedai clan have the ability to wield magic. This is due to the last battle between the hero and villain, where the Dark One "tainted the source of the Dragon's power, causing all male magic-users to be driven mad," as IGN noted.

The TV series will focus on Moiraine, an influential figure of the Aes Sedai organization "as she embarks on a dangerous, world-spanning journey with five young men and women," as Deadline wrote, one of whom she believes is the reincarnation of the Dragon who "will either save humanity or destroy it."

Will It Differ Greatly From The Novel Series?

Currently, only two seasons of The Wheel of Time have been confirmed. But since Jordan's world spans 14 novels, as well as a prequel and two companion novels, there's still a whole lot of ground to cover. Obviously it's yet to be seen how and what the show's writers will adapt from the novels, but it's set to serve fans of the book series well.

"For so many people, including me, this book series has served as a world to escape to, to lose yourself in, to devor and inhabit completely," The Wheel of Time's writer Rafe Judkins said in a statement. "And I couldn't be more honored to be the one finally bringing that world to life on screen, for old fans to lose themselves in all over again and new fans to discover for the very first time."

Who's Starring In The Show?

When Will The Wheel Of Time Be Available To Watch?

The Wheel of Time began filming in September 2019, but due to the coronavirus pandemic, production was halted in March 2020. As fan site Dragonmount notes, the first six episodes of Season 1 had been filmed prior to lockdown, with a remaining two to go. While there's currently no release date for the series, it's expected to air sometime in 2021.

In the meantime, Amazon Prime's official Twitter handle for the show is currently providing fans with a book club of sorts. Fans are currently reading the first book along with the account, which is asking questions about each chapter for fans to then discuss in the comments.