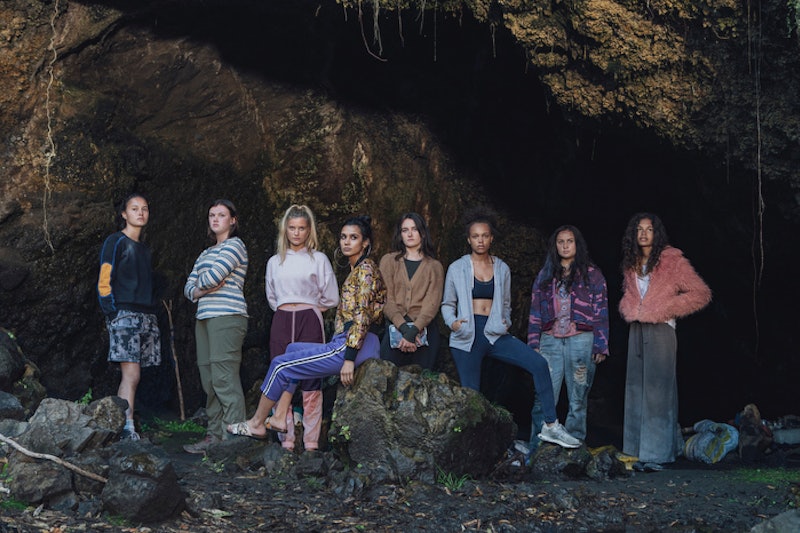 Amazon's new series The Wilds is a coming-of-age story about a group of teen girls who get stranded on a deserted island together after the plane taking them to a young women’s empowerment retreat crash lands, killing the flight crew and leaving the girls to fend for themselves. But of course, it's no accident that the girls wound up stuck on the island.

The dystopic teen drama, from writer and executive producer Sarah Streicher, is Amazon's first foray into young adult programming. The Wilds presents itself as a cross between Lost and Lord of The Flies, but focuses on the girls' inner lives and traumas rather than merely their fight to survive — a timely twist on the original stories. Though a few members of The Wilds's cast might look familiar, there are plenty of relative newcomers — learn more about them below.

This is Sarah Pidgeon's first starring role, after landing small guest parts on shows like Gotham and One Dollar in recent years. She plays Leah Rilke, a loner who's struggling after being dumped by her boyfriend —who happens to be a famous author 20 years older than her.

Sophia Ali is best known for her recurring role as Dr. Dahlia Qadri on Grey's Anatomy and for her part in the 2018 Blumhouse film Truth or Dare. In The Wilds, Ali portrays Fatin Jadmani, a fashionable girl who's written off as a "slacker" by the other girls after she doesn't pull her weight on the island — but if they knew her past, they might see her differently.

After a number of roles in short films, Jenna Clause landed her first major acting role as Martha Blackburn in The Wilds. The kind-hearted and optimistic Martha is best friends with Toni, and her time on the island forces her out of her shell.

New Zealand actor Erana James is best known for her role in the New Zealand comedy series Golden Boy, as well as for starring in the U.S. fantasy horror film The Changeover. In The Wilds, James plays Toni Shalifoe, a tomboy with a quick temper whose softer side comes out through her relationship with her best friend Martha.

Shelby Goodkind is Australian actor Mia Healey's very first acting role after graduating from drama school in Sydney. Shelby is a seasoned Texas pageant queen, but even her optimistic outlook on the girls' grim situation isn't enough to keep her secrets from surfacing on the island.

Helena Howard, who gained international acclaim for her performance in the titular role of Madeline's Madeline, is one of the most well-known young actors in The Wilds. She plays the quiet and artistic Nora Reid, who's worried about her sister Rachel pushing herself too hard.

Actor Reign Edwards has a longer list of acting credits than some of her castmates. She's best known for playing Nicole Avant on The Bold and The Beautiful and for her work on the series Snowfall and the MacGyver reboot. In The Wilds, Edwards plays Rachel Reid, sister to Nora and a highly motivated elite diver whose sole focus is on training for the Olympics.

Shannon Berry has been acting for nearly a decade. Her biggest roles prior to joining the cast of The Wilds as Dot Campbell were on the shows Hunters and Offspring. Dot is a sarcastic tomboy who's also the sole person responsible for caring for her dying father.

In addition to the teenage cast, Rachel Griffiths from Six Feet Under and Brothers & Sisters joins the cast as Gretchen Klein, the organizer of 'The Dawn of Eve' empowerment retreat, and actors David Sullivan and Troy Winbush play two investigators trying to figure out how the girls ended up on the island. The Wilds premieres Dec. 11.