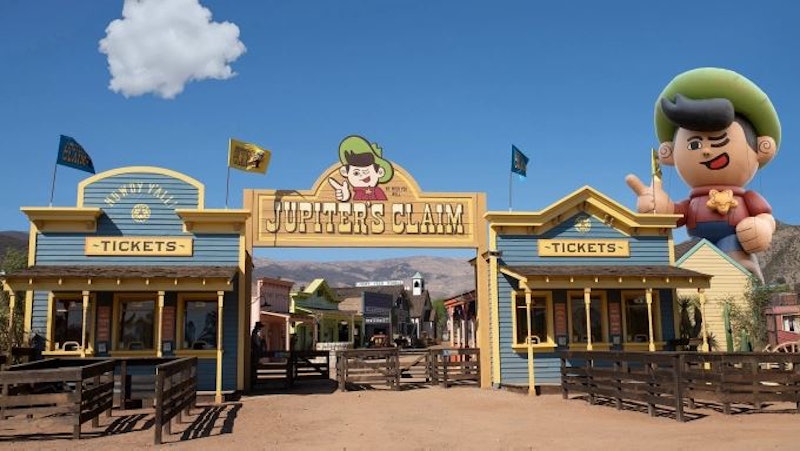 If watching the trailer for Jordan Peele’s new movie Nope made you think, “I want to go to there,” then you’re in luck. Starting July 22, the same day as the film’s theatrical release, the set housing the film’s theme park “Jupiter’s Claim” will be open to tourists on Universal Studios’ backlot via their famous Studio Tours. This is the first time in Studio Tour history that an attraction has released on the same day as its film release. Production Designer Ruth DeJong reportedly disassembled the set in post-production before it was transported to the Universal lot and reassembled with the original props, so the version that audiences will get to experience is exactly the same as what was used for the movie.

In Nope, Jupiter’s Claim is a Western, gold-rush era theme park “predicated on the white-washed history and aesthetics of the California Gold Rush,” as per Deadline. Jupiter’s Claim is operated by Steven Yeun’s evangelical and former child star character Ricky “Jupe” Park, and it becomes a central location for Daniel Kaluuya and Keke Palmer’s characters as they investigate strange goings on in their town.

Having part of his film’s set on the Universal backlot is a dream come true for Peele. “I remember visiting Universal Studios when I was 12 years old and being mesmerized,” he said in a statement. “That experience reinforced my passion and drive to someday join in on the meta-magic of ‘backlot life.’ Since then, I’ve been fortunate enough to direct three movies for Universal. It is a privilege to honor these collaborations with my studio partners, crew members and cast, and to be able to share Jupiter’s Claim with fans.”

Universal Studios’ EVP and General Manager Scott Strobl also commented on the partnership, saying, “Jordan’s creativity and ingenuity have produced unique, thought-provoking movies, and we couldn’t be more excited to showcase his original Jupiter’s Claim set as a permanent centerpiece attraction on the Studio Tour, giving our guests a front row seat to authentic movie-making magic.”

If you can’t wait until July 22 to visit in person, the theme park has its own creepy website, which Peele revealed on July 1 via a tweet. Upon first entering the page, we’re greeted by a winking cowboy, bright skies, and an semi-ominous “we wish you well” greeting before the lights suddenly turn off and the cowboy’s eyes go dark. Elsewhere on the page are a map of the park and the attractions one can visit, including The Bank, The Theatre, The General Store, The Winkin’ Well, The Star Lasso Experience, and The P.O. Box. Each of ththe perose pages has interactive games that can be played, so long as you have enough “jangle” currency.

As audiences traverse the different pages of the website, alternating messages are revealed when the lights go down. On the bank page, the lit version explains what the park’s “jangle” currency is while the dark version warns that spending money here will “continue this cycle of terror.”

Meanwhile on the Winkin’ Well page, the initial caption reads: “As above, so below here at Jupiter’s Claim’s “Winkin’ Well!” You’ll wanna look your best as you gaze down into the void and spend your hard earned Jangle®️ cranking out a photographic document of your handsome prospecting lifestyle. Don’t forget to give those flashbulbs a wink as you smile into the past.” But when the page turns dark so does the caption: “Look down into the well. Look up toward the skies above. Whatever you may wish, it will not change anything. It cannot be undone. It cannot be unseen. If you fear the darkness that lies ahead, peer into the well and pray you may be spared.” You know, just fun theme park stuff!

Enter at your own risk — there’s plenty of hints and clues for superfans to ruminate over until the movie and park are available to all on July 22.