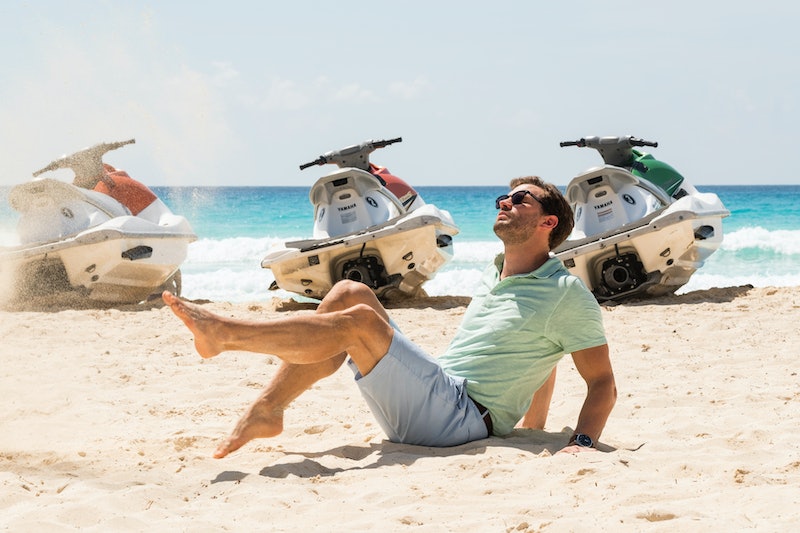 Did you ever think you'd see the dude who plays Christian Grey singing to a flock of seagulls? Well, now you can, in the kitschy comedy Barb & Star Go to Vista Del Mar. The film stars real-life BFFs Kristen Wiig and Annie Mumolo as two middle-aged Midwestern women who pack up their culottes and head to an ostentatious Florida resort. But once there, they find themselves embedded in a chaotic plot to destroy Vista Del Mar by an evil villainess Sharon Gordon Fisherman (also played by Wiig). Dornan plays Edgar, a loyal himbo henchman who is also desperately in love with said villainess, and yearns for her to make it "official."

In Dornan's big musical number, hilariously titled "Edgar's Prayer," he twirls around the beach, serenades seagulls, and bares his soul for the open sea. He literally climbs a palm tree while singing lyrics that go, "I'm going up a palm tree like a cat up a palm tree whose decided to go up a palm tree." An obviously-not-Dornan dancer body double does some impressive pirouettes while Edgar pines for his beloved. Needless to say, Dornan's song and dance and the goofy perfection of it all have become the talk of Barb & Star.

Part of what makes Dornan's performance in Barb & Star so good is that he fully commits to being absolutely ridiculous. And as it turns out, Dornan had a total blast doing so. As he told Entertainment Weekly, "the truth is that I'm very rarely not being silly. That's kind of who I am, a lot of the time. Anyone who knows me well knows that. So, it was this chance to get to have this limitless fun within this crazy world that they created. There was nothing that was too silly, and that just suited me."

And really, Dornan, much like Edgar, has yearned for something he didn't yet have. As he told Variety, he has always really wanted to do comedy, but "I just wouldn’t have been considered for comedies for lots of different reasons; mostly because I’ve played characters that aren’t remotely funny. All my slate is very dramatic and very dark. And I love doing that, but there’s this other side of me that has always wanted to release a version of myself and let something go out of myself that is probably closer to me. And I'm a grown-up, I've got responsibilities, but often I’m not serious at all. So this just suited me very well."

Dornan's performance is getting so much attention that some fans have even gone on to suggest Dornan deserves an Oscar nom. Even if the suggestion is in jest, he's got people talking about his newfound comedy chops. Here's to seeing more Dornan cutting loose and going the comedy route in the future.