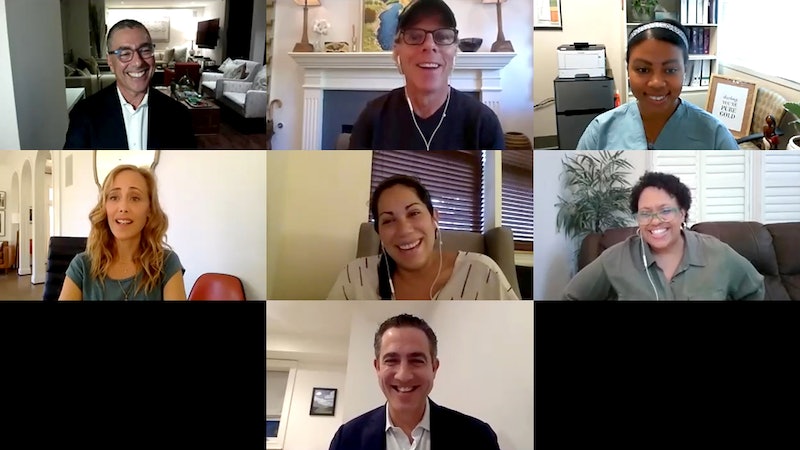 TV show productions may currently be at a halt in the wake of the coronavirus outbreak, but that didn't stop the Grey's Anatomy and Lenox Hill casts from teaming up for an epic crossover event to celebrate healthcare workers and discuss the importance of representation in the workplace. The virtual conversation took place via Zoom on Monday, July 13, and included Grey's stars Chandra Wilson (Dr. Miranda Bailey), Kim Raver (Dr. Teddy Altman), and Greg Germann (Dr. Tom Koracick) as well as Lenox Hill's real-life doctors Dr. David Langer, Dr. John Boockvar, Dr. Amanda Little-Richardson, and Dr. Mirtha Macri.

The Netflix series came at a time when healthcare professionals were needed more than ever as the COVID-19 pandemic spread throughout the country and left many in need of serious medical care. And while the series was filmed prior to the outbreak — with the exception of a bonus episode that was released in June — it has given fans a chance to further appreciate all the hard work done by medical professionals on a daily basis. But for Little-Richardson, doing the series was about so much more than that.

"I participated because I wanted to kind of represent three things really clearly: I wanted to represent Black people, I wanted to show us in different aspects of how maybe a lot of the general community may view us," she explained. "I wanted to show Black families, my personal families, our relationship and how cohesive we are and loving and supportive."

She also wanted to highlight female healthcare workers, who now make up a significant section of the medical community. "I wanted to show women in medicine and how we are strong and at the forefront," she added. "We're 50 percent of medical classes now."

Wilson chimed in to comment on how the Grey's Anatomy cast makes sure to honor real medical professionals, even if they're just portraying doctors on-screen. For example, she said, they make a point of immersing themselves in all the medical jargon and approach every scene, especially involving surgeries, with “tremendous respect" as a way to honor all of the real doctors out there. “We know what the instruments are, we know what the machines are and what they’re supposed to do so we can react accordingly,” Wilson stated. “It’s important for us for no one to be able to say, ‘That would not the be the way that would go at all.’ We want to make sure we’ve honored whatever field it is that we are supposed to be displaying.”

That said, even the doctors of Lenox Hill have admitted that sometimes the ABC drama can veer off the realistic path. People were quick to dub Lenox Hill as the real-life version of Grey's Anatomy, but while many of the doctors consider the comparison to be a compliment, Dr. Langer made it clear during an interview with Entertainment Tonight back in June that their lives aren't nearly as dramatic as some of the Grey Sloan Memorial characters. “They’re actually pretty accurate or more accurate in the beginning, but then the medical stories kind of veer into craziness or lunacy because it's the people and the relationships that underlie the show’s success," he told the outlet. "Maybe the next medical show will use some of the lessons of [Lenox Hill], and allow the reality of what's happening to be fictionalized in a better way.”