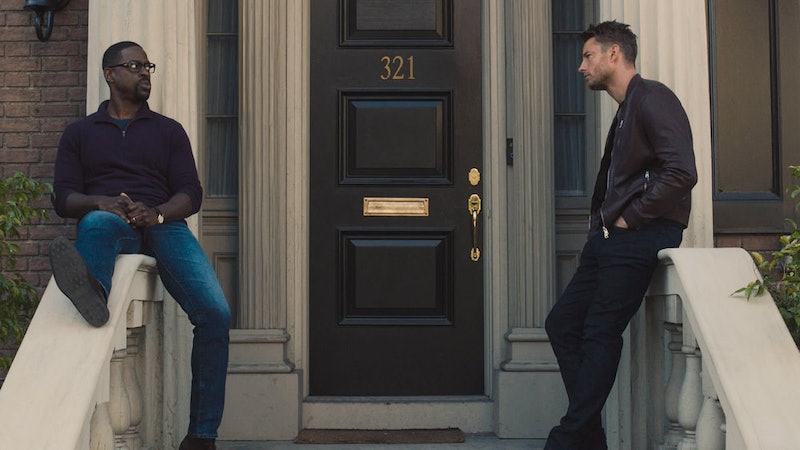 Spoilers ahead for This Is Us Season 5, Episode 13. For weeks, This Is Us has been building toward a confrontation between Randall and Kevin. The two already made some small strides in mending their relationship after last season’s blowout fight, but there was still a lot left unsaid. In the April 13 episode, they finally got their chance to hash things out.

Kevin initially came to Randall’s house to apologize for the fight they had last season, and also for not standing up against the racism his brother endured when they were younger. “I’m sorry if you ever felt alone, and I’m sorry if your childhood wasn’t what you wanted it to be,” Kevin said. Randall, hearing the word “if,” told Kevin that he didn’t seem very genuine — especially because what Randall really needed was an apology for Kevin’s own microaggressions. “You don’t even understand what it is you’re apologizing for,” Randall told his brother.

At first, Kevin was defensive. “What do you want from me?” he asked. But Randall has shown this season that he’s done keeping the peace at the expense of his own feelings. It is a symptom of white supremacy that the onus is put on Black people to comfort white people even when they are the ones in pain. Growing up in a white family, Randall has spent his life minimizing his emotions and shielding his white siblings from the very specific traumas he incurs as a Black man. But they haven’t afforded him the same grace. Now, he’s tired. “Normally I would hug you and I would tell you that you did all the right things. I would try to make it all OK for you,” he told Kate earlier in the season amid the Black Lives Matter protests, realizing that any discussion they had about it would result in him assuaging her white guilt. “But if I made things better for you then where does that leave me? I’m sorry but I can’t do that. That has been my pattern all my life, and honestly Kate, it is exhausting.”

In his talk with Kevin, Randall echoed that sentiment, declining to accept Kevin’s half-apology just for the sake of moving on. Randall wants a real relationship with Kevin, and that will require Kevin to look inward, acknowledge his own racism, and make a persistent effort to dismantle it.

By the end of their conversation, Kevin was much closer to understanding Randall’s feelings. He apologized for what he didn’t know back then and what he still doesn’t know now, admitting that he sometimes conflated Randall’s Blackness with him getting “special treatment.” Randall in turn apologized for saying that their dad died ashamed of Kevin, and the two closed out the episode in a much better place. But this was only the first step toward working out their issues.

Just as George Floyd’s death at the hands of a white police officer last summer forced many white people to reckon with their racism and complicity in racist systems, Kevin will need to continue challenging his biases and actions every day. In an interview with Hollywood Life, This Is Us star Sterling K. Brown agreed that this is the beginning of a long road for Randall and his family, because America’s issues with race can never be resolved in a single conversation. “It’s a continuing dialogue that everyone has to be open to and be comfortable in their discomfort,” Brown said. “It’s not something that is always going to make people feel good.”

Now, Kevin will need to sit with that discomfort as he works to repair his relationship with his brother.