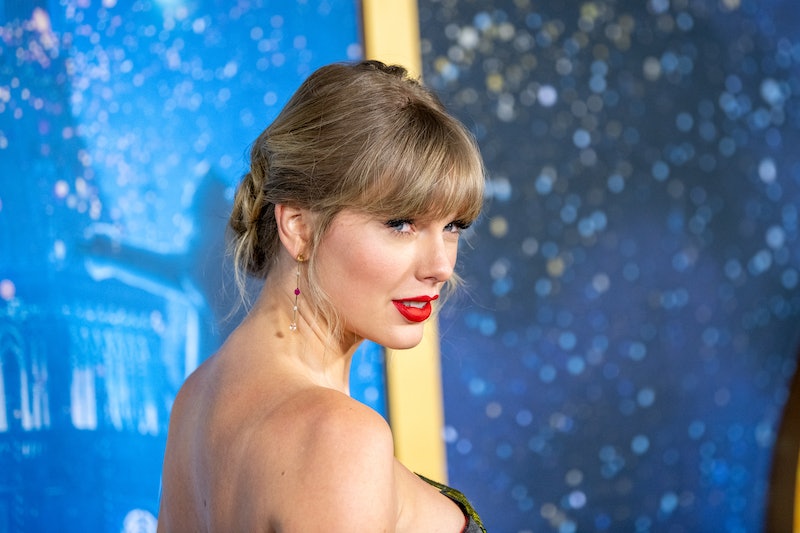 Surprise! Taylor Swift is releasing her eighth studio album Folklore at midnight on Friday, June 24. Not only will the record consist of 16 brand new tracks from the singer written while in self-isolation, but if fans' suspicions are correct (and Swifties are always on the ball), it will also feature a collaboration with a certain special someone. A new Taylor Swift Folklore theory has fans thinking that the singer's boyfriend Joe Alywn co-wrote two songs for her surprise new album. If it's true, prepare for some uber-romantic collaborations (and perhaps some happy tears). Bustle reached out to Swift, but did not receive an immediate response.

When announcing the album on Instagram, Swift revealed that she worked with some of her "idols" and long-time collaborators to create the songs of Folklore, including Jack Antonoff and William Bowery, who she specifically said she wrote two songs with. Many fans were quickly overcome with excitement for what's to come, but some stopped to realize that they don't know who Bowery is. As it turns out, nobody does. Google searches show that there's no known artist or songwriter who goes by the name of William Bowery. He also just so happens to be the only person mentioned in Swift's post that wasn't tagged with an Instagram handle. However, the name does have some strong connections to Alwyn, prompting many to think it's a pseudonym.

As quickly uncovered by fans, the actor's great-grandfather was named William Alwyn, and he was a composer, conductor, and a music teacher, meaning Alwyn has more connections to music than most might have thought. Additionally, Swift and Alwyn allegedly had their first date at the Bowery Hotel in New York City, which would make it a sentimental spot for the couple, and a codeword that's cool and subtle enough to be used in a pseudonym. If this rumor holds true, fans expect that one of the songs they co-wrote is "Betty," a nickname often used by people named Elizabeth, which just so happens to be the name of Alwyn's mother.

Of course, this is Swift we're talking about, so fans have more than one theory. If Bowery actually has no link to Alwyn, then one fan suspects that a legendary music icon is actually behind the pseudonym: Joni Mitchell. Fans have theorized for years that Swift's outstanding Red deep cut "The Lucky One," which tells the story of a woman who achieves huge success but resents the fame that comes with it, is about the famously reclusive songwriter. Additionally, Mitchell has a painting named "Bowery Bum" and her father's name is William Anderson. If Swift was able to get Mitchell, who hasn't released an album since 2007, to write with her, it just may be her most impressive feat yet.

Regardless of Bowery's true identity, it wouldn't be the first time that Swift pulled a few tricks to conceal someone else's identity, or even her own. As fans will remember, Swift wrote Calvin Harris and Rihanna's dance hit "This Is What You Came For" but was credited under the pseudonym Nils Sjöberg. The singer was dating Harris at the time, and according to TMZ, they decided to keep Swift's involvement a secret so as not to overshadow the song, which didn't exactly pan out. Following their split, Swift is now credited as a songwriter under her actual name on Spotify and Apple Music.

Most recently, fans theorized that Swift's brother Austin recorded a cover of her 2017 hit "Look What You Made Me Do" under the name Jack Leopards & the Dolphin Club, an unknown act who has no other known songs, when Swift tweeted her excitement over the cover being used in an episode of Killing Eve. Fans' suspicions were all but confirmed when the track's cover art was traced back to a childhood photo of Austin, and the song's credits revealed that the cover was produced by Antonoff and none other than Nils Sjöberg herself.

In a complete boss move, Swift reportedly had Austin re-record the song to bypass Scooter Braun, who owns the masters of her first six albums, so that he didn't earn royalties from its television usage. If William Bowery is indeed Alwyn, and the couple has collaborated on her surprise new album, Swift will have pulled off yet another boss move.

More like this
Taylor Swift & Her Mom Clap Back Against The “Shake It Off” Plagiarism Lawsuit
By Jake Viswanath
The Beyhive Is Buzzing About Beyoncé’s 'Renaissance' Album
By Sam Ramsden
Taylor Swift Calls Dwayne Johnson "The Man" After Revealing New "Taylor's Version" Song
By Jake Viswanath
Lauv Is No Stranger To Taylor Swift, Drake, Ed Sheeran, & Fame
By Alyssa Lapid
Get Even More From Bustle — Sign Up For The Newsletter