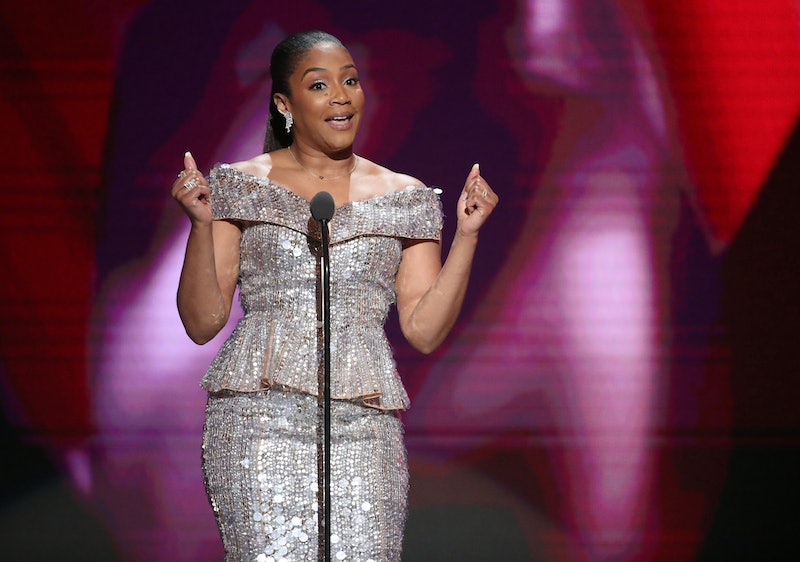 The Grammys have yet another scandal on their mantle. In a new interview with Variety, Tiffany Haddish said she declined to host the Grammys pre-telecast ceremony because she wasn't offered any compensation for the gig. In response, the Recording Academy's Interim Chief Harvey Mason Jr. has publicly apologized to Haddish and said that he has expressed his remorse about the offer in a private conversation with her.

On Thursday, Dec. 9, Haddish, who is nominated for a Grammy this year for Best Comedy Album, told the outlet that she was initially honored by the Recording Academy's request but turned it down because she would not get paid for it. The pre-telecast ceremony typically lasts over three hours, streams online before the main show, and gives out over 70 awards. "I was like, 'The exposure is amazing but I think I have enough. I appreciate you guys asking,'" she said. "And as much as I appreciate the honor of being nominated, that's not okay."

In addition to not getting paid, she said the Academy also refused to cover hair, makeup, or wardrobe costs. "All of that would have to come out of my pocket," she said. "I don't know if this might mean I might not get nominated ever again, but I think it's disrespectful."

In a statement to Variety, the Recording Academy said that unlike the main Grammys broadcast, the pre-show ceremony is not a CBS production and is put on by the Academy itself. Because they are a not-for-profit organization, the Academy traditionally asks that all participants, including hosts, performers, and presenters, appear for the exposure without financial compensation. However, Haddish still disagreed with the notion that the host of a three-hour event should not get paid. "This is something that needs to be addressed," she told Variety. "How many other people have they done that to? It's like a guy asking you on a date but telling you that you have to pay for it."

In response to her remarks, Mason Jr. posted a video to Instagram in which he apologized to Haddish and stated that he personally disagreed with the offer. "Unfortunately and without my knowing, the talent booker working for the Academy told Ms. Haddish that we wouldn't even cover her costs while she hosted this event for us," he explained. "To me that was wrong. I'm frustrated by that decision. It was a lapse in judgment, it was in poor taste, and it was disrespectful to the creative community." He said that Haddish allowed him to have a conversation with her, in which he also apologized to her directly. "Tiffany, we are sorry and thank you for allowing me to speak on it," he concluded.

This comes after the Grammys received major backlash for snubbing The Weeknd at the 2021 awards show, giving him zero nominations despite After Hours being one of the biggest albums of the year and breaking chart records with his hit "Blinding Lights," which is now Billboard's number one Hot 100 song of 2020. The artist himself even criticized the Academy, calling the show "corrupt" and demanding better transparency in the nomination process. The concerns came a year after former Academy CEO Deborah Dugan accused the organization of keeping their process secret and having conflicts of interest that affect the nominations.

More like this
Everything To Know About Taylor Swift’s 10th Studio Album, 'Midnights'
By Grace Wehniainen and Jake Viswanath
How Ghosts Inspired Kesha’s New Music
By Jake Viswanath
Beyoncé’s Special Tribute To Sister Solange Was Both Touching & Hilarious
By Stephanie Topacio Long
There's A Taylor Swift Easter Egg In Ryan Reynolds' 'Deadpool 3' Teaser
By Marina Watts
Get Even More From Bustle — Sign Up For The Newsletter