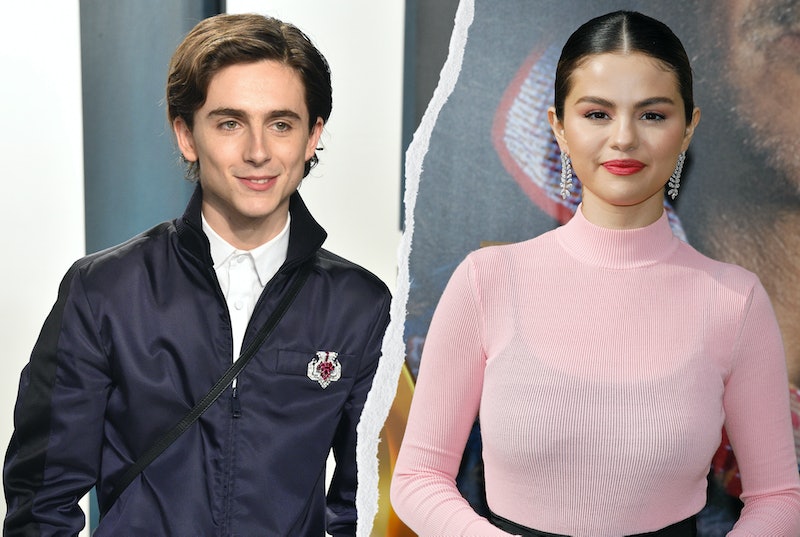 If you think Selena Gomez would make an amazing president, Timothée Chalamet wholeheartedly agrees. On Oct. 24, the Call Me By Your Name actor joined Selena on Instagram Live while he was in line to vote early, and joked that she should run for president come 2024. For now, though, both stars seem focused on encouraging their fans to use their voices in the 2020 presidential election — and honestly, that seems like a great place to start.

"I voted, so I feel really excited," Gomez said on the Live. "It felt cool to be honest." For her, the experience was especially meaningful because, during a recent appearance on Voting Power Hour, the Rare singer revealed that it was her first time voting — ever. "Honestly, I'm not ashamed to say this, but I kind of — this was my first time," she admitted.

Having already completed her civic duty by mail, Gomez was particularly curious about Chalamet's voting plan. "I'm at my early voting station in New York," he said. "I'm at Madison Square Garden. It feels metaphorical because so many big things happen here." Gomez, for her part, said she "really wanted to do it in person," but couldn't quite make it work.

The Rainy Day in New York co-stars chatted for nearly 10 minutes, and Gomez revealed that they actually chat fairly often. Chalamet also praised Selena's commitment to activism, saying that her effort to get people to the polls has been truly inspiring. "I'm really proud of you." he said. "You've been all over this stuff. I know it's making a difference. It's really important and I'm inspired." He also unexpectedly endorsed her for president. "Selena for President 2024," he joked. "I'm about it."

The actors also got real about their election anxiety, which is something we can all relate to right now. "Oh man, I really hope this guy loses," Chalamet said, referring to Donald Trump. "I think in New York we're safe, victory-wise." Gomez agreed, adding that she had a stomach ache due to all of her election nerves. The two stars continued chatting until the Little Women star had to go inside to cast his ballot. "Everybody vote," he said at the end of the stream. "I'm gonna go vote right now."

This Instagram Live wasn't the first time Gomez encouraged fans to participate in the upcoming election. On Friday, Oct. 23, she shared a photo of herself voting by mail on Instagram, writing, "Just finished filling out my ballot!" Earlier in the week, the singer discussed the high-stakes election with Stacey Abrams for She Se Puede, an organization that encourages Latinx women to vote. "I believe that my generation specifically gets distracted and there's so much going on in the world," Gomez said. "This is the one time that we can make a difference."

More like this
Hailey Bieber Just Responded To *That* Viral Met Gala Moment
By Radhika Menon and Sam Ramsden
Wondermind Just Launched A Site That's All About Supporting Mental Health
By Carolyn Steber
Everything To Know About Taylor Swift’s 10th Studio Album, 'Midnights'
By Grace Wehniainen and Jake Viswanath
At 14, Jurnee Smollett Was Taking Meetings With Missy Elliot & Lauryn Hill
By Chloe Foussianes
Get Even More From Bustle — Sign Up For The Newsletter